The city of Tokyo has been in great excitement from 10th to 14th of October. Tokyo Designers Block (TDB), a festival of various kinds of design, had started and main areas in Tokyo, such as Aoyama and Harajuku were used as an exhibition space. The topic was ‘design makes a city’. It can be said that this event is a meeting of design activities, because about 200 artists and creators not only from within Japan, but also from all over the world participated in it. People with a yellow ‘TDB map’ seemed to enjoy to look at designed works, which were placed everywhere in town. I would mainly like to report about the exhibitions in Aoyama and Harajuku. 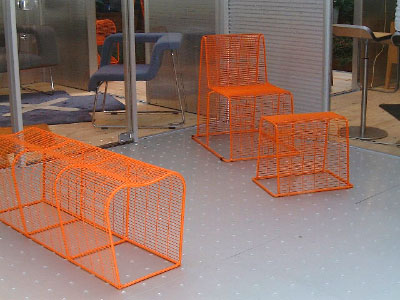 Azumi is the unit of Mr and Mrs Azumi based in London. They have received many of honourable awards for their works, such as the 100% Blueprint Design Award (UK) and the Good Design Award (Japan). UN cafe garden, which is located on the basement floor at Aoyama Cosmos Building, was the exhibition space for them in this event. Many plants were set around a bench and chairs made of thin orange steel. It was really enjoyable to look at the colour contrasts. The design of a cross-shaped blue table was functional as well as pretty. There was just enough space to put a small thing (i.e. a bag) in the middle. A salt- and peppershaker shaped like a snowman was lovely, too. I felt like being there as long as possible as if it were a real cafe.

Idee Design Competition 2001 was held at Spiral on Aoyama dori. Visitors to this competition and votes at web site chose the winner by judging the theme ‘interchangeable’. Many functional and funny works, such as Kazutoshi Amano’s work ‘Drop’, which can be used as a cushion on the floor as well as like a sofa placed by the wall and ‘3 in 1’ made by Dan Rayed, which is not only a small table but also a steel chair, obtained attention from the visitors. The appropriate price for selling and suggestions for making more attractive works were considered when the visitors voted. They seemed to be serious but enjoy looking around. 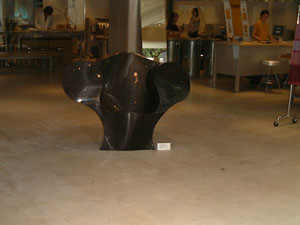 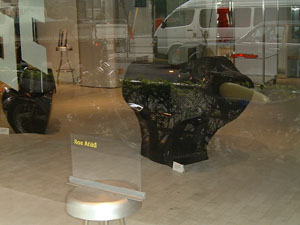 A-Poc Aoyama is located 5 minutes by walk from Spiral. This was the exhibition space for Ron Arad‘s chairs. He was born in Israel, grew up in London and is now teaching product design at the Royal Academy of Art. He exhibited two chairs called ‘The Big Easy (1998) Carbonfiber Version 2001’ and ‘The Little Baby (1989) Carbonfiber Version 2001′. The same designs made with stainless steel were introduced before. The chairs, looking like black shining objects, were found at the entrance of a clothes’ shop dealing with colourful clothes. 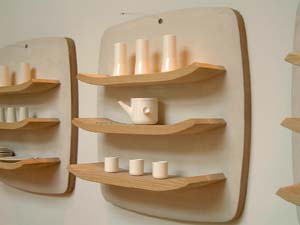 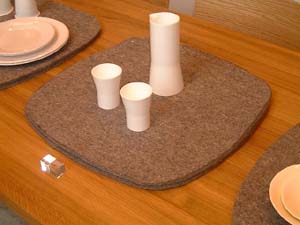 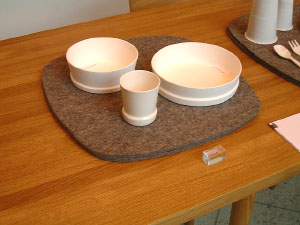 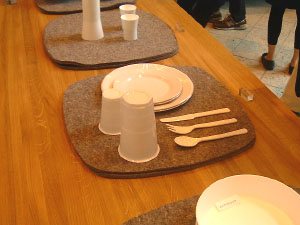 White dishes made by Michael Young, Marc Newson and Jasper Morrison could be found on the first floor at Idee shop. There were a plastic cup and a paper-shaped glass dish by Newson, a bowl and a cup shaped like a holding saucer by Young, as well as dishes which were simpler but of wider shape by Morrison which impressed visitors from around the world.