The cover of this month was designed by Cisma, a group of graffiti artists based in Brazil. Their name has three different meaning as schism, suspicion and strong conviction. We asked them about their activities and Brazil.

Cisma is an art group from Brazil. All members are graffiti artists. We prefer not to reveal our real names to avoid problems with the police. we also believe that anonymity helps us keep our work away from pressure.

What kind of activities is Cisma currently doing?

Making videos, graffiti bombing, having fun with design , eating pizza, going out with the dogs, playing fliperama and having sex.

How was Cisma founded?

Cisma was founded in August 2000, during lazy times. 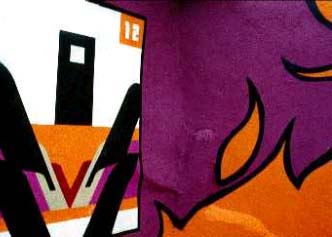 Your web site has many motives of creatures such as human bodies and fishes. What do you express through them in the site?

These things are only elements of communication. They have no meaning by themselves. The real meaning is in the final composition when they become alive.

Where does your inspiration and idea from?

They come from memory and desire.

What do you think is the most important aspect in web design?

Ripping off. Everybody copies everybody. Rip off leads the internet. People are afraid to try new things because they know what works and what is good too fast and easy through the internet. There are tons of K10K-Threeoh-Surfstation-Linkdup design zines now. Everybody know what’s the trend now. And 90% of web-designers are following it.

What did you imagine in working on the cover design of Shift this month?

How do you think about working in Brazil?

One of us works in an excellent design studio Lobo in Brazil, but there are few places like this here, Sindicato is one of then.
We still do some independent work but it is hard to be well paid and recognized in Brazil.

Do you have any interesting trend in new media scene in Brazil now?

We love Japan. We have a lot of Japanese influences.

What is the thing that you are interested in the most?

Who are your favorite visual/graphic designers?

This is the last question. Would you tell us about your plan for the near future?

Doing something we like is the most important part of our plan.