Featuring an array of dances, music, theatre and other explorations from across the globe, this year’s Singapore Arts Festival pleaded with the people to fill their senses. Not only has she achieved her slogan of Fill Your Senses, [women have been known to squeal at their advertisement which features a male model with disappearing body parts (above the waist please!)], she has also managed to touch the hearts of numerous people. Indeed, this annual event has not only managed to bring the arts to the theatres, but to everyone’s hearts. 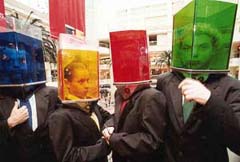 Launched with the Festival Village on the scenic location of Fort Canning, the rustic feel of the Kampong (Malay for village) was recreated with acts from seven different countries. For three nights, the air was filled with the rhythm of drums from U Theatre (Taiwan), accompanied with music from the Philippines (Helobung Cultural Dance Troupe) and Iran (The Kamkars). While shadows from the Wayang Kulit (shadow puppets) (Indonesia) were cast upon the surrounding greenery. Together with other acts from Singapore, Indonesia, Philippines and Vietnam, the Festival Village attracted a total of about 6,800 visitors, of which most if not all came to bask under the moonlight, and absorb the native feel of traditional acts.

In a bid to widen the audience range and bring the arts to the everyday man, various free acts were put up across the island. One of which Gargoyles were seen scaling down a sprawling mall in the heart of Orchard Road (the shopping belt to be in). Sighted throwing flower petals while descending and giving flowers away after landing, children were especially thrilled when these creatures mingled with the audience. They inspected bags, teased couples and even refilled water bottles at a nearby fountain. Thus bringing the arts to the people who are not use to stepping into theatres.

The usual workshops and forums were organised to introduce the various performances, but this year’s Arts festival went a step further. Live chats with the festival participants were held via the Internet. Featuring composer Philip Glass, Australian quartet Fourplay and local string quartet T’ang Quartet. With intimate conversations, the one on one interaction in one’s own home brought the Arts Festival closer to the heart and to the mind. Hopefully giving us greater insight from the words of the creators of the featured art.

We saw and heard their fabulous acts. We cheered them on and felt the tremors in our hearts. Indeed this year’s Singapore Arts Festival filled our senses, and has found a place in our hearts.