Realization of the current lack of vision and ideas in contemporary art may sometimes serve as a catalyst for understanding the necessity of creating a Grand Style. In Russia the status of being a new artistic landmark has been recently contested by the Neo-Academism concept, now actively promoted by the PPF (Peaceful Prosperity Front) group. Alexei Guintovt, Andrei Molodkin and Gleb Kosorukov have developed a mega-project for creating a new capital of Eurasia in the city of Novosibirsk. 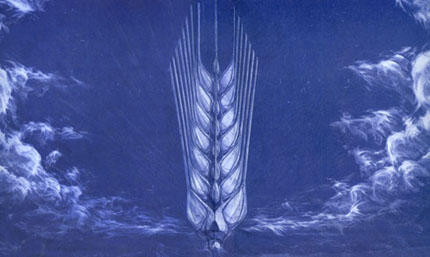 Inspired by the popular geopolitical ideas of the Russian Renaissance the authors suggest erecting a new capital of Russia in the geometrical center of Eurasia. The concept is primarily concerned with the fact that the present capitals (Moscow and St. Petersburg) are located too far to the west – a situation that stimulates the pro-western course of the country’s development. Meanwhile, a partnership with China, India and Islamic countries looks very promising. According to the artists’ design Russia should identify itself as “the Middle Country” and therefore the capital should be moved further to the east.

The laws of architectural order composition, hierarchy, canon and “golden measure” stated as the main principles of their city construction policy, the authors make a what at first may seem paradoxical move and start working on a project of making 24 monumental compositions meant to become both semantic signs defining functional city areas and the stylistic art markers of the cityscape. 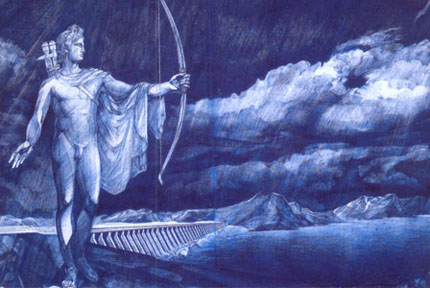 The clarity of the idea is most vividly present in the first of the five monuments showed to public – “Barrage of Apollo”, a 100-meter tall titanium statue of Apollo Belvedere with a rocket launcher system behind his back standing on the shore by one of the hydroelectric power stations. Novonovosibirsk is a city of arts, science and future. Apollo is its patron-god. Rockets launched from the “quiver” of the Greek deity are used for peaceful purposes – regulating the meteorological weather conditions. The ability to control climate is the base of prosperity of the agricultural space empire with Novosibirsk as its new capital. The revival of the arctic agriculture should be boosted by the use of the “Golden Wheatear” rocket system launching “peace” rockets with solar batteries. Space exploration will start with building the “Shambala” cosmodrome that should look like a soaring white swan. 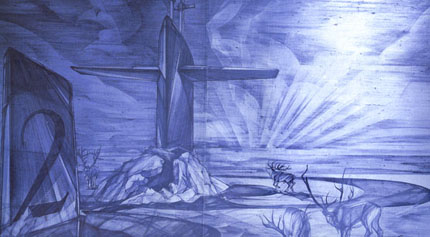 Not all monuments are functional – some of them just illustrate the ideas. For example, the titanium model of a surfacing “Atomic Orthodoxy” nuclear submarine is a symbol of the “peaceful atom”. Some projects are still in development – the Plato’s “Capitolean Wolverine” Theme Park, the Fiodorov “Monomakh’s Cap” flight control center and Berdiayev “Guided Missile Cruiser ‘Aurora'” river port. All monuments are presented as 4.2/2.5 m pictures done in blue ink ball pen. This is quite a convincing (when it’s fully accomplished) futuristic project of the ideal city. By the way, it is officially recommended by the State Duma Department of the State Construction.