There are more events to revaluate video as an art medium, for something which used to be indeed commercial and or otherwise spread mostly by word of mouth. Even big movie productions are going for DVs. The evolution of technology have definitely familiarized the digital world to public. However, there remains a fact that video might have gone too close to the consumer side, and in return lost the dignity as an art medium. That was the exact same dilemma that photography got stuck in for the longest time. But considering of the mesmerizing status that photography has won in last 10 years in the art world, now it might be video’s turn to be put on trial. If succeeded, the future is bright. 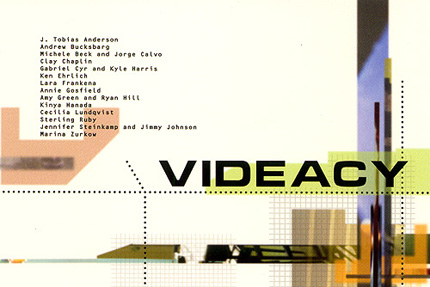 Andrew Bucksbarg, who calles himself a designer of media experiences and modalities, was one of the first ones to see the potential of this affordable and accessible medium. “It is from my experience searching for a space to support my own artistic interests that my need to curate arose, ” says Bucksbarg. It was only a year and a half ago that he went on to found adHocARTS.org.

“It was created by the need to create opportunity for artists across disciplines and creative workers, persons who do not adhere to any particular “sect” in the arts. The idea was to encourage work outside of the traditional format of galleries and museums as well as forms of work that are under represented in these formats or are overshadowed by large money making industries. adHocArts.org uses the web/internet technology, an amazing tool for independent and experimental artists, to reach the arts community and share work in Los Angeles and around the globe. adHocArts’ mission is to promote the exploration of creative modalities through artistic resistance, expanded media, art and technology, cultural perspective, and diversity and difference by sponsoring events that encourage these practices,” states Bucksbarg.

For VIDEACY, the first to-be-annual event that was sponsored by adHocARTS.org, 12 groups of artists were called in from all over the world. The intention was simple.

“Video and animation were a natural choice for an initial event because of the coupling of moving images and sound and music. Many artists manipulate video in installations and performance, composing interesting hybrids of these as well. I think it is wonderful there are visual artists and designers creating sound for their video imagery and music composers creating music videos with visual material. Video supports crossover. Because video is financially manageable and accessible, you have more artists from different backgrounds making work with it and sharing that work with each other.” Through the curation of Bucksbarg, Sarah Roberts (works in large scale interactive installations and was founding director of the Integrated Media Program at Calarts) and Sheila M. Sofian (award-winning experimental animator working with sociopolitical documentary whose work has been shown internationally), various types of work were presented. Very suggestive, yet their brochure remains humble closing the introductory saying “…I hope you like what we came up with,”.

“The capture or creation of moving images coupled with sound snd music, installation, performance and other hybrids will stimulate artists far into the future. The digital arts guarantee that these intermingling of genres. Patterns emerge in this process. Artists make choices that reflect their humanity through the relationship of their work and the work of others, often exposing the sublime or the treacherous,” brochure enforces. VIDEACY is and will remain as an activator of this creative interaction.