Los Angeles is a definite car society. The layout of the city makes the life impossible without a car. It’s often questionable if LA is a “city” in the first place. For instance, stores doesn’t spread in a walking distance. It’s rear that you can get a neighborhood feeling living here. Maybe the geological fact “ocean on the west, desert on the east” has got something to do with this. It’s just very open, spread out space. In order to have a social life in LA, having a car is a must unless you have endless links of friends, who are willing to spare extra drive for you all the time. You cannot possibly count on bus after 9pm. Don’t expect the taxi to come find you on the street either. “I’m just gonna run to the store,”, well yes, with a car. Somehow LA succeeds to be an isolating city despite of its function and population size. 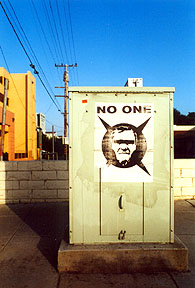 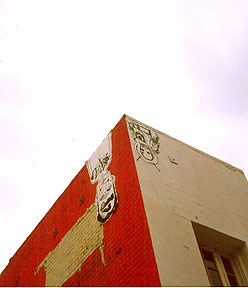 I always missed the intimacy and chaos of the “city” while residing here. However, lately I came to realize this spacious landscape has been contributing to the street art. Not that it’s new, but art on the street has definitely been causing more awareness and impact on public these days. How you pull out a cynicism by placing your piece of statement in the cityscape, is the attitude amongst many street artist, not only limited to city of LA. Even all time legal contributor advertising industry, has been buying the impact of these raw methods and joining the party. 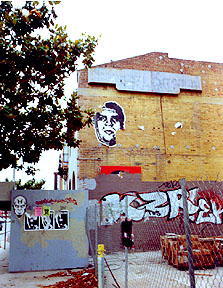 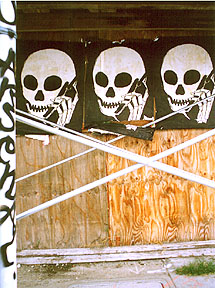 Probably there’s no need to mention the king of postering Shepard Fairey (BLK/MRKT, “OBEY-GIANT”), this has become an indeed popular method for many artists and followers. Since the art itself has been made in the print shop already, you get to play with the size, placement, and quantity. One gloomy day, I was lucky enough to come across Dave Kinsey’s (also BLK/MRKT) man figure and arkitip spaceman (by Scott Snyder) at the corner of the building, which you’ll see as one of the opening photos. It’s always fresh to see them placed on the building wall especially if you are familiarized with their work in print. Posters, usually quite large in size, succeeds to suggests the physical existence of the artists there after.

Recently, these “skull w/ cell phone” posters have been so provokingly meaningful, maybe due to Nikki Taylor’s unfortunate cell phone related car accident, or for the brain tumor theory? 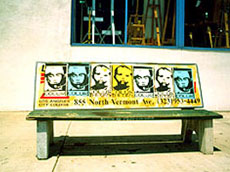 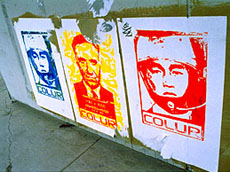 Speaking of theory, COLUR THEORY, has creeped me out since one of the political figure they used is a wanted montage photo (has been known for its replacement of the face part, since no one actually witnessed him) from Japan. In 1968, this suspect managed to rob $3,000,000, by wearing sheriff uniform on a motorbike. Many other new artists have been winning recognition by getting it seen in various locations, making the public wonder who they are.