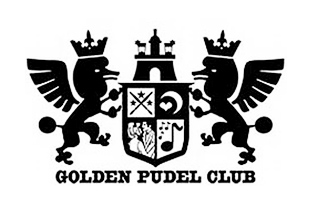 The golden pudel (poodles) club is my favourite club in hamburg. Five minutes away from the central night amusement quater, it is a small house at the “Elbe”, the largest river in Hamburg. Next is the “Hafenstrasse” which has several squatted houses.

The club is very small with one bar, a gangway and a small room with an even smaller stage. It is somehow dirty and trashy all around. The music reaches from easy-listening to electro, from glam-rock to house, from pop to drum and bass, none of them meant to serious. That’s probably the main attitude of the pudel-club: always being somehow ironic but with a good taste. From time to time the good taste invites rare international superstars like Kid Koala, Tim Love Lee and Richard Devine next to the local heroes like 8doggymoto, dj Koze and Ego Express.
If it’s too crowded inside and the weather isn’t too bad, most of the people are standing outside under an extra roof around the club and are sitting on a large staircase, watching the harbour across the river and the ships passing by.

Next to the pudel is also a small parking place. There someone build an aluminium-glass pavillion to have somekind of extra-expensive business party right in the neighbourhood of the house-squatters. It was the opening party of the “Hamburger-Dialog”, a new-media congress. Someone spread fake-invitations for a free glass of champagne for everyone so the party makers were afraid that the house-squatters could come and a unit of heavy policemen was organised.

The pudel called for a peaceful party at 7 or 8 am. Not too many poeple came, had some drinks and were standing at the barrier that should prevent them from going to the business-party. As an ironic statement to the dreams of the new-economy, they showed a specially produced trailer on one of those multimedia-screens, that looked obviously displaced in front of the club. In the film two people in suits and with colored plastic-helmets were walking round the city, weaponed with g4-powerbooks. A voice told idiotic slogans like “you will get excited on how effective we realize our innovative ideas” or “visit our website: double-u, double-u, double-u, dot, ham-bur-ger, dash, dia-log, dot, d, e” and “we aim to get more users to our website, hold them on our website for a longer time and make them return.” Those and the backgound-sound (a mind bending easy-listening loop) were partly taken from the original website of “Hamburger-Dialog”.

The evening got a very strange flavour with the video playing over and over, the policemen as an extraordinary decoration and everyone in a slight rebellic mood. After some time the video had to shut down, the policemen an the barriers disappeared and the party was over…