A father in an executive suit sitting by a dining table, children with the appearance of wholesome honor students, and a smiling, well dressed mother bringing a dish from the kitchen to her folks. An intact iconography of quality American family, full of happiness, laughter, and success. This is, at first glance, what Winston Smith‘s art works would suggest to the audience. The conventional oil painting texture appears to be as inoffensive as pictures hanging in hotel rooms. 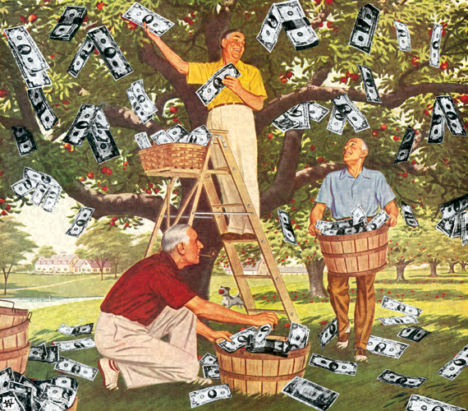 Quite welcoming, you might think. Well, get ready for a counterattack. A close inspection of his work, on the contrary, reveals dark, contradictory metaphors hidden beneath the surface of a happy family model. An disproportionately large spider on a dinner plate. An out-of-place naked man unreasonably sunbathing by the table. A four alarm fire outside the peaceful house. Playing with oxymoronic expressions of good and evil, Smith prescribes a bitter pill to the audience to raise awareness of the concealed facts behind the wall. 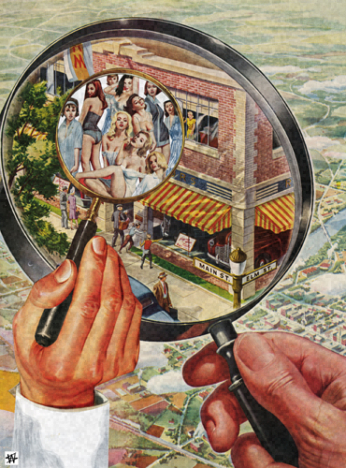 Winston Smith, a collage artist, has been widely known as Godfather of Punk Collage Art, since in the 70’s he obtained public recognition with his album design for a punk band Dead Kennedys. Today, his collage technique still remains the same, using an adhesive and x-acto blade. By cutting and pasting pictures from obsolete publications in the 50’s and 60’s, Smith twists the original messages of the images, and infuses new satiric phases into good old days of America.

He agitatedly casts his cynical plots over the exaggerated idealism of those days – yearnings for the perfect life without acknowledging the ignorance of human vices, greed, and hate. The outcomes are cleverly humorous juxtapositions of multi-layered realities, both positive and negative, moral and immoral, all mixed into chaotic visual compositions. Punk spirit of the golden age has still been succeeded by Smith’s wickedly ridiculing approach against mass consciousness.

Starting from February 1st to the 28th, Smith’s new exhibition, No Turning Back!, is launched at Culture Cache Gallery in San Francisco. This solo show features the newest works of Smith, as well as his self-published zine, Fall Out, in his early days.