On October 7th and 8th, the event entitled ‘Sports to Kibarashi’ (Sports and Distractions) was held at an alternative space Room in Gentilly in the suburbs of Paris. In this small and pure white space originally used as an atelier of a boat, a video projector, stereo system and a big screen were installed. 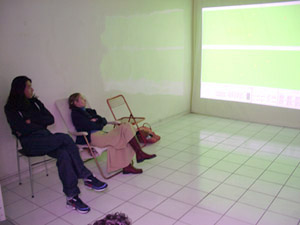 Blue lights from windows covered with blue vinyl sheets and beautiful colors reflected from the screen were brightly shinning inside the space. Over the course of two days, about 10 artists represented their sound and visual works. Among of them, I would like to introduce two impressive works.

A short film entitled ‘Faut que ça saute’ made by Nadia Lorand and Jerome Elies, traveling various parts of France for almost one year. They made all sorts of jumps with Nature and chateaux for the background. Shooting was done by 8mm and then films were converted and edited into digital format. It’s a laborious work. It’s also really nice to listen to the electronic music made by Jerome with those visuals. 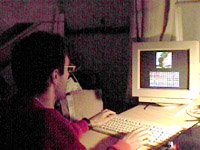 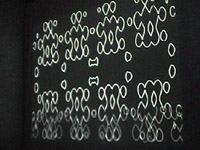 Another one is an experimental collaboration between Makoto Yoshihara and Robin Fercoq and it was really interesting. It’s an improvisation that reflects Robin Fercoq’s simulation images (C language) ‘vegetal’ through a projector, to the music made by Makoto Yoshihara – ‘lOOp’ and ‘bOOm’ (tools to make electronic music made by him with Max). With those interesting tools ‘lOOp’ and ‘bOOm’, everyone can make electronic music easily.

Sports to kibarashi 2 will be held in the next Spring.