Brussels, year 2000. The Continent exhibition takes place in the city center, in a building specially renovated for the occasion and dedicated to become a modern art center, iMAL. The event runs from September 8th until October 12th in the context of the year 2000 celebrations with other exhibitions, one on architecture and another on the memory of the City. But the specificity of Continent, besides the fact that it only shows multimedia works, is that it is held simultaneously in two towns: Brussels and Helsinki. They both have the same settings so they keep in constant communication. 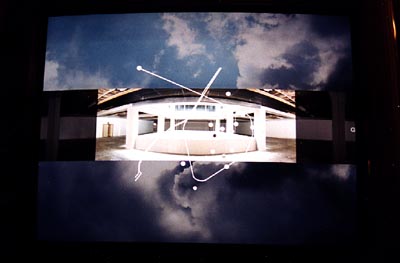 The exhibition was organised thanks to a large collaboration amongst four decorative arts schools: the Medialab of the Art and Design University of Helsinki, the Decorative Arts National Superior School of Paris, the University of Paris 8 and the Hoogerschool Sint-Lukas of Brussels. It brings together about fifteen works of young and confirmed artists. Visitors therefore meet different approaches of multimedia art. Nevertheless, almost every piece of work displayed tries to put the user in direct interaction with an entity, whether it is the program or a person connected via the Internet, and the work itself ensues from this interaction.

Michel Francois, a notorious Belgian artist, who took part in the last Venice Biennial, presents a wall of films, in all a thousand little videos, witnesses of short periods of reality, displayed in an interactive grid. Experience allows the visitor to mix these video moments in a personal and original cut, the display of the video clips in the grid varying all the time.

Franky D.C, an artist from Brussels, works on multimedia by means of settings and performances. He took up an area in the room with a shamble of miscellaneous objects that he made himself in real-time on the net via a web-cam. He then suggests to dematerialize it’s value, by putting it’s image on sale on the net, as a screen base.