Titled Urbanworld Flim Festival 2000, this was a "film festival solely dedicated to redefining and enhancing the role of minority films in contemporary cinema." Over a course of 5 days, the festival featured 61 films, including 13 features, 20 shorts, and 10 documentaries at the Cineplex Odeon Worldwide Plaza in New York City. 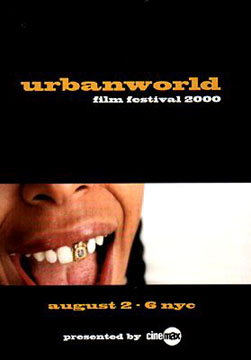 Founded in 1997 by Executive Director Stacy Spikes, this festival has grown to be the largest internationally competitive festival of its kind, with an advisory board with such well-known figures as: Samuel Jackson, Kenneth "Babyface" Edmondos and Andre Harrell.

The Grand Jury Prize winner of the festival was "One Week" by Carl Seaton which premiered in the U.S., a film about a soon-to-be groom who learns that he may have contracted HIV. Waiting seven days for test results turns out to be the most hectic week of his life. It’s the independent films like this one that are rarely shown in major theaters these days.

The film "The Visit" by Jordan Walker-Pearlman was the winner of the Audience Award: a powerful drama revolving around a young man who is visited by family members and a childhood friend which triggers his spiritual awakening and redemption.

"Voice of the Voiceles" directed by Tania Cuevas-Martinez was one of the 10 documentary films shown at the festival. Portraying Mumia Abu-Jamal, a death row inmate whose imprisonment has become an international movement, it’s a collection of interviews which explore his career achievements, trials, and movements surrounding the man.

Some of the so-called "independent" film festivals such as Sundance have become a mainstream marketing show where entertainment industry executives gather to fish the next million-dollar maker. Within four short years, Urbanworld Film Festival has managed to spread its name as the entry gate for minority filmmakers while remaining true to the spirit of independent films. Although some mainstream films were included in its line-up, this year’s festival exhibited some of the unknown rising talents of the community who showed their powerful storytelling capability.