IdN is a digital design magazine from Hong Kong. It focuses covers the range of creativity from graphic design to motion graphics mainly on the web. It has gained a great reputation from creators in the world.
Each issue features a cover design by an up-and-coming designer. It’s published bi-monthly and full of designers’ artwork and information. IdN is a high-quality design magazine both in contents and design.
The mirror interview with Shift is also featured in the IdN September issue. Be sure to check it out. 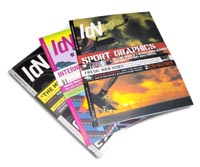 What would you do if you did not do IdN Magazine?

V: I think I would be doing something with the mouse yet…
C: Maybe a magazine more rather than the only girl in the design and editorial department.
B: Something also related to creativity.
F: I’d probably try to do some of my own works.
S: Keep travelling.. and eating.. then lose weight.. then keep travelling, eating again..

Do you think IdN is interesting enough?

V: Magazine is kind of continuous design. I’d never say enough, otherwise it would never be improved.
C: I guess nobody feels their current moments are enough but I’m sure we will try to do our best.
B: Could be further improved.
F: I think IdN is interesting, but we still have room to develop, especially on some experimental works.
S: Enough.

What is the most interesting thing you want to do? And what is the craziest thought you have ever had?

V: Making one issue as Suicide issue, allowing contributors and readers to criticize IdN itself… It sounds so exciting to me but too exciting to my boss…
C: An issue that only has graphics and pictures (no text) but the reader still
understands the theme and what we want to say. (Yeah, no contributor, I guess it may be my less work issue)
B: The most interesting thing is to get your idea from imagination to real.
F: Open a shop selling interesting stuff beneath our office.
S: A Great Conference in HK. ( we will have a big announcement on our website, later on..)

What does design/creativity mean to you?

Is there anything or anyone that you think has had a particularly strong influence on IdN? e.g. film producers, writers, fashion, music, culture, etc.?

V: Cost and IdN team.
C: People, whatever it is: writers, designers, or film producers.
B: It’s hard to clarify indeed. Especially in the global village, everything could have influence on others.
F: Our inspirations come from all designers, it’s like a designer network where we exchange our ideas.
S: Ourselves.

Whom do you regard as being really cutting-edge at the moment?

V: All shown in the MOST WANTED issue of next IdN. Check it out.
C: Many, some people we were get in touch with them, the rest of it, we are still seeking.
B: The three scientists from the US & the UK who are now working with the DNA of human beings. Unfortunately I forgot their names.
F: John Maeda.
S: I think is Mayumi Kaneko.. she is amazing.. and cutting-edge to me!! (check it out on Shift web site, if you don’t know who Mayumi Kaneko is.)send me her photos!!!

What do you think are the most important trends in the digital design world today and what do you see coming next?

V: Life style.
C: I guess today trend is everything being interactive (with sound, motion). And I guess the next trend is still interactive but back to some artistic feel.
B: Nothing more than the web, I guess.
F: I think nowadays Technology is leading the trend. Sooner or later,technology will be too much and get saturated. Digital design will no longer rely on / be dominated by technology, so it’ll be the age of humanity, and how people search for their human identity.
S: Too much… auh… auh… ( I want to throw up.)

What is the biggest influence on the young designer generation today?
V: M&Ms. (media and movies)

C: Culture is the biggest influence of the designer in any generation. Internet, because it will make desingers easier to get in touch with something else outside of their country.
B: The trendy imagery/ideas created from the well established design firm/famous designers.
F: Internet.
S: Shit!! agh.. agh…. agh… ( oh. can’t stop throwing up.)

What are the advantages and disadvantages of being a designer in Asia?

V: Well, they get cheaper price of IdN but get lower pay in general. (except Japan…)
C: The advantages of the Asian designer still have much room for their attempts and learning (I think the learning curve of the Asian designer is still very fast growing). So many designers have no strong own charactor.
B: About disadvantages: In general the thinking method is comparatively conservative.
F: Advantages / More inspirations from oriental culture. Disadvantages / limited resources.
S: Advantages is the disadvantage. And the disadvantage is the advantage.You know?

V: The most obvious difference is it was HK$150 in year ago, and now is HK$70 with a CD-ROM, a poster and a free paper. But in the near future, it might be even cheaper including all the above premiums plus a cup of coffee for free at the first IdN cafe.
C: No comment.
B: In general there were ups and downs, but basically it’s optimistic.
F: Can’t tell, I’ve been here for just 3 months.
S: IdN is so cheap now. Cheap, in terms of price only. So everyone can afford to buy it!!

What would be your ideal IdN?

V: A necessity for creative people.
C: An IdN newspaper, I hope IdN can report and feature something creativity driven everyday.
B: An avant-garde in the field. That’s what everyone dreams of.
F: My ideal IdN is free, so everyone can get it.
S: Sorry. This is a Billion $$ question, I wouldn’t tell you here.. e-mail me for futher discussion..

The last question. Do you have any plans for the near future?

V: Working, working and working.
C: No.
B: Just keep the gears working.
F: I’ll be looking into illustration.
S: E-mail me first. And let you know later on.