This month’s cover design was produced by Enlightenment, led by Hiro Sugiyama, an illustrator who also goes on tour with Towa Tei as a member of Graphickers. With the free magazine called ‘Track’ Hiro has established his own style. Recently, he has been active working on commercials for TBC, Honda HRV, etc. 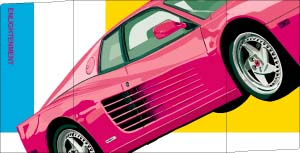 My father is a dentist. As a child I naturally thought I would be a dentist. But when I have spent a few years preparing for the entrance examinations after I left high school, I suddenly changed my mind and came this way. After I graduated from the East Art School, I started to work with Flamingo Studio and illustrator Teruhiko Yumura, where I learned everything from the attitude on working to the scene.

How was Enlightenment established?

I started it in 1997 and then designer Tomoyuki Yonezu joined. I wanted to do things between graphic design and illustration. It’s a kind of place where we can create interesting visuals. At present, there are three members, the third being Mika Ninomiya. I don’t want the office to be a big one. Recently we’re mainly working for advertisements. Like the one for TBC using the picture of Takuya Kimura, one for Parco Grand Bazaar composed of plain images, and the commercials for Honda HRV which is extremely like an analogue.

Is there any difference in the direction between your personal works and Enlightenment’s?

There’s hardly any difference in the direction. Originally the direction of Hiro Sugiyama itself includes many things and the difference is only in the final stage of output. I don’t like being caught up in styles and to be blunt, the concept is ‘do whatever I want to do right now’.

You’ve been publishing a free paper called ‘Track’. How did you start it? And what do you want to tell with it?

I wanted to have an exhibition on paper, not in a gallery. And there’s a great printer called ‘Graph’ and I wanted to give publicity to them.
What I want to tell with this is an attraction of printed matter. An ordinary paper can be transformed into a special one with ink. I also wanted to appeal to everyone what we’re interested in and what we want to show. 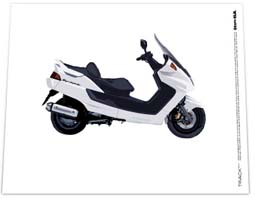 You did an exhibition of ‘Track’ at Colette in Paris. How was it received? And how is the reaction from overseas?

You propose designs with different styles each time you publish ‘Track’. How do you get those ideas? Also how will ‘Track’ be in the future?

Unfortunately, our ‘Track’ will be discontinued. It’s published from vol.001 to 007. We’re trying to do a new expression every day and get stimulations from anything, anywhere. Fine arts, movies, music, magazines, nature, friends, the universe… We’re always trying to switch our creative antenna on and receive interesting ideas from anywhere.