I’m sure you’re all thinking the London section is a bit crap. It’s rarely about London and always about things that have happened already. Not this time. Those wonderful onedotzero people, Matt and Shane put on the preview event on Friday last week to give us a sneak preview of coming attractions at this years gig. 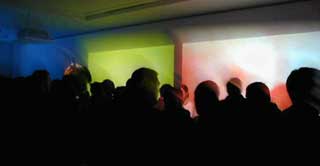 Somehow I’ve been involved in some way over the past few years and I’ve seen this small event turn into a substantial and significant international festival. This year the guys have been all over the place showing the “best of,’ tapes. This included a visit to Taipei showing at a club night just before the quake.

The success of the event is down to two main factors; the first is that early on they identified a need to get digital video / film work shown in a new situation, the second is that they’re hard working, ambitious and very likeable guys with the right intentions.

It’s alright if you make feature films, write novels or make art objects, we all know what to do with them; stick them in a gallery or cinema or something. With the type of material onedotzero represents it’s less straight forward because there’s no established way to do things when you’re dealing with a mix of new media, performance, motion graphics and video works.

This is an extract of what was sent to me last week:

onedotzero’s fourth annual event will continue our diverse programme strands of the previous three festivals and related events, building on the innovative work from rising stars and established talents which were produced and showcased as part of the project.

The adventures in moving image continue with the fourth and largest festival featuring a range of new and premiering work from motion graphic shorts, rarely seen and ‘lost’ promos, cutting-edge animations, computer gaming movie sequences, features, interactive [DVD and CD-ROM] projects from around the globe and the best of contemporary Japanese visuals.