Issey Miyake has been described as “the world’s most original fashion designer” by the British newspaper The Sunday Times. He has been chosen as one of the “1000 Makers of the Twentieth Century.” He is immensely complimented and widely celebrated more than any designer ever could be. Hence, writing anything good about his work is old news. What is remarkable about him, however, is Miyake’s ability to keep innovating and reinvent the process of design over and over. That is not something that every designer can pull off. 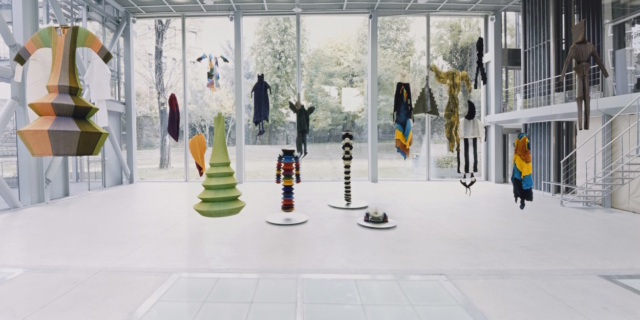 In this show, “Making Things” (which was originally held at the Foundation Cartier pour l’art contemporain in Paris), Miyake exposes his process of design. One of his most recent and most interesting pieces is called A-POC, short for “A Piece of Cloth,” whose process is extremely simple yet magically puzzling. It’s simple because this piece begins as a tube of knit. It is puzzling because one can cut this tube of knit in order to create their own panoply, including, socks, hat, and even a handbag.

In one of the rooms of the gallery, a gigantic coil of this material unfolds over a procession of mannequins. The exhibition guide explains that the material is produced by a computer-programmed industrial knitting machine. This can be customized to produce numerous variations of clothes.

There are many other innovative pieces like this in the show. For example, pants that are over 2 meters long are shrunk to human scale by soaking them in a chemical bath. Or, a simple square of fabric, without any needle or thread, wraps around the body, creating an elegant dress.

While many designers today are obsessed with fame and money, Issey Miyake is obsessed with the craft of design. He invents his own process and materials, and that is why he creates clothes that are almost beyond our imagination. He is a painter who creates his own paints, brushes, and canvas.

One must wonder, though, about practical aspects of his clothes. Many of them are often extremely irregularly shaped and use radically unusual materials. It is difficult to imagine, for instance, how easily one can maintain clothes that have metal films on their surface.

Nonetheless, any creator, whether in fashion, industrial, graphic design, or any other creative industry, can learn a great deal from one of the masters of the twentieth century. It is not just his process and talent, but also his will as a designer to persist with what he believes in that makes Issey Miyake distinguished from everyone else.