Surrounded by a strong smell of soot and heat, one of the staff and Hachiya were ready to ride on the board. He tried to place his feet on the board again and again, then finally rode on the board with both feet!

He was actually floating with the AirBoard’s jet engine. To go forward, he had to kick the as same as skateboard. (It’s crazy to kick a such dangerous object having a jet engine!?)

This AirBoard project combined the boiling point of collective consciousness in this technological society and the floating feeling men of today have in their minds (but nobody didn’t think it actually floated). It succeeded in encouraging people and society to use an AirBoard, something that stands out in an otherwise extremely boring movie.

Postmedia theory says ‘Art as an outcome of collective consciousness will sprout on the surface of consciousness when the crust of reality becomes too delicate to support the present state’. I think this applies to this art project.

I’ve heard that ‘this project was too stupid. It’s not art’ over these two days. I can understand what they say, but I don’t want this project to be recognized as equal in value to other artworks which cannot have any influence on society. It was really a wonderful two days.

The artwork of Hachiya simply let us think what the relationship between society and art should be. Unfortunately, the experiment ended in failure on the second day. I lost my nerve when the silver skirt started to melt. 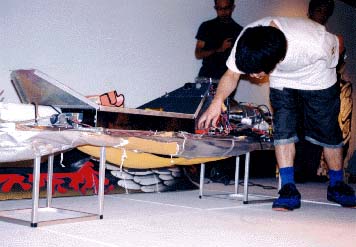 The experiment on the second day ended in failure. The silver skirt melted because of the intense heat. It reminds us that it was a real experiment. I look forward to the next success.

The AirBoard will be exhibited in Germany soon and before that, another experiment will be carried out in Japan. I hope it won’t explode.