Robot are Jay and Rob. Two designers slash Dj’s slash party promoters slash interior decorators slash recent store owners, basically you’d have to ask what they didn’t do. I met Jay about a year ago working on a job together and we’d get into conversations, or rather he would get into telling me about his plans for the future.

Besides his plans to buy a laptop and move to a deserted beach somewhere in thailand making music which he would then FTP to civilisation, or running around in huge hats in the middle of central (major business district in hong kong), he had a plan to start up a monthly night.

This would also be the catalyst to his other plan, starting up a small fanzine that started up as a flyer and would grow bigger every issue until maturing to a full fledged magazine. A month later, he had told me he quit his job and Robot was officially born.

I caught up with Jay as Robot were preparing to take up the task of decorating the interior of a huge warehouse where a party on the eve of the handover anniversary would be held. A party that Robot would also dj in. Not bad considering their company… Gilles Peterson, 4 Hero, UFO amongst live murals from Futura2000 and Stash. Big Event. 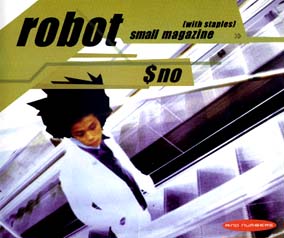 So tell us about Robot.

It sort of started in england, just doing parties… I’ve never really seen anything like a separate thing… like even design, being in college, in the same course as me there were other Dj’s as well… I think it was actually in the lemon office that the name ‘Robot’ was conceived, just because we were quite interested in the women here and they all had that glazed look, and maybe a year ago everyone had like a short fringe and basically walked around and they all looked like Robot, and we were all like ‘ohh, robot women..’, don’t know, just turned on by that robot factor, so that was how the name came about… also thinking about it, we all got non-stop energy, we just keep going and going, and whatever the budget or deadline, even if we don’t have time, we’ll still find time to do it and get it done and in that sense we’re all like Robot, but then we’re not like Robot cause it all comes from the heart.

How do you see yourself different from the other promoters here that hold parties?

All the other promoters here don’t really have an identity… basically Blah Blah presents, big name Dj, but when they get there there’s not much on offer. Like generally the decoration is pretty much shit, maybe the sound system is okay, but everything is pretty much obvious, and what we want to do is give them an identity, the party is called Robot and the idea is to give the people as much as we can and surprise them as much as possible. Like the gin and tonic night where there was a bowl in the ceiling full of gin and tonic and we had straws coming down from it… you know, people generally don’t expect it, and the latest flyer designs have been a bit more humourous where basically now it’s ‘New Hygenic Robot’ which is like a total joke cause we’re totally unhygenic, but it’s just like looking at things in different ways, which again goes back to design because that’s what it’s all about. Trying to find a different way of presenting something.

Did you ever expect to be decorating almost all the club nights here?

Not really, the first decoration job we did was pretty shit, looking back, even like just knowing your way around Hong Kong, knowing where to get stuff… and then we stumbled across lycra… which is the absolute bollocks of decorations. There’s just so much you can do with fabric, with lycra you can basically transform a club since it’s not just hanging from a wall.

Yeah, I want to come to Japan.