This month’s cover design was produced by Maurizio Poletto and Florian Koch from the new media company ‘Nofrontiere‘ in Vienna, Austria. A lot of talent has consistently appeared from the company. We can see their activities in lots of their client works such as Swatch and LEGO. What is the factor they fascinates so many clients? We interviewed them about the activity of Nofrontiere, etc.

Florian: I am Florian Koch from Munich, 25 years old. After working in an advertising agency I started to study “visual design” at the college of design in Schwäbisch Gmünd, which is an unimportant city in south Germany, but it has a very good college. During my studies I worked at Nofrontiere for six months – and surprisingly, after I received my diploma, I am here again! At Nofrontiere I am a media-designer. I am also an illustrator sometimes.

Mauri: Ciao, my name is Maurizio Poletto, 25 years old too. But everyone except my mother and some strange friends are calling me Mauri, Morri, Morìs and so on… even Florian calls me this. So about me, I decided to become a “graphic designer” when I was young (like 13). In one of those American soap operas which my mother was watching every day after lunch, there was a character whose job was to make charts for business meetings (at that time I thought this was GRAPHIC DESIGN). It was not a complicated job and it looked very funny just making simple drawings, lines and shapes, so I went to a design college. After college I entered the only public graphic design institute in Italy located in a small, medieval city called Urbino. The “Istituto Superiore per le Industrie Artistiche” is a very important institute which deals mainly with editorial design, illustration, photography. I met so many interesting people from every part of the world and one of those was Andrea Steinfl who was the co-founder (with Ali Szadeczky) of Nofrontiere Design in Vienna. After I finished all my regular exams I came to Vienna and I’m still here today.

Flo: I just finished a CD-Rom for Deutsche Bank and if I don’t do the things which Mauri does, except from the museum and book stuff, I spend my time thinking about web sites, animations and videos. Some of my better ideas I actually create. 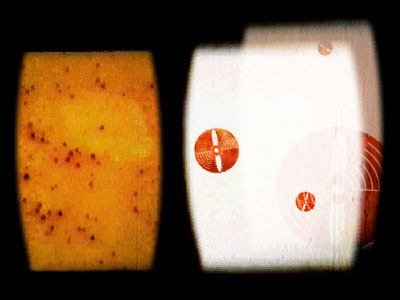 Could you tell us more about the activity of Nofrontiere?

BOTH (unisono-sottovoce): Nofrontiere is working on some interesting projects at the moment. We just finished a version of a CD-ROM about Sigmund Freud, which is a project we fought for a long time and now we finally did it. It will be on the market at the end of the summer.

We are producing an innovative interactive experience for a new museum on the Judenplatz in Vienna. Here we will use some new technology that will allow an emotional, intuitive interaction for the museum visitor without mouse, keyboard or screen – just using light, sound and the interaction of the user. Nofrontiere’s team of architects are working heavily on the studio extension which runs parallel to the development of an integrated design approach, a hybrid of the media ‘languages’ and architecture.

Finally, but not in terms of importance, is the Nofrontiere Book 1999 which Nofrontiere will present in October at the Frankfurt International Book Fair. Through the projects, experiments, ideas and the new developments in mediatecture and interface design, the book will be an interesting journey into the Nofrontiere world of the last 3 years: in general, the happenings in the place of coincidence.

Mauri (quoting fritz): We work in a strange place. It is a place where completely different people meet and communicate. We are people of different personalities, tastes, prejudices, education, experiences, professions, dreams, nationalities and ideas. Maybe we have one thing in common: A collective experience of a special identity that does not manifest itself only in the individual personalities of the people but also through the personality of the place. It is a spatial Identity. It is The Place of Coincidence.

Flo: Nofrontiere is a good place to stay, but I think it is hard to stay in one place if you are interested in different styles or medias (e.g. television or hardcore information design…). That’s why some people see Nofrontiere as a chapter in their evolution. It is a good experience to work at Nofrontiere, but I will leave soon to gain some new ones in a different country.

Mauri: Well, we are many but I could not tell you exactly how many. People are leaving and coming like at a train station, …yeah… we are a kind of design train station.

Flo: You take the train of your main interest (sooner or much much later).