About once a year, in Germany, there’s a conference for designers to attend. This year I chose to attend TYPO ’99 in Berlin which was sponsored by the FontShop. This years theme was image and language, and didn’t focus too much on typography as much I thought it would. 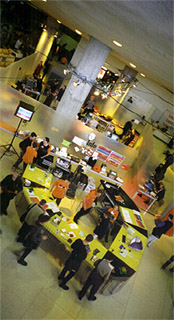 The conference consisted of three main areas: TYPOhall, TYPOstage, and TYPOfolio. TYPOmall was the place where you had to have an I.D. to enter. And the I.D. or the registration came at a price. A serious price. If you weren’t a student and decided to register with less than a month left until the conference started then the conference would cost you around 900DM. Not cheap, but not expensive if the show was good. This not only included the entrance to see the premium speakers but also included lunch on Friday and Saturday and a nifty vinyl bag with “it’s my bag” printed on the outer part. Goodies one could say. The conference was from Thursday through Saturday and what follows is a brief rundown of the days and speakers I attended.

Thursday : Today was the check-in. Get your I.D. and get into the TYPOhall for a good seat. I expected an exciting opening for the first day of TYPO 99. Boy was I wrong. The first speaker was Bazon Brock. A professor. And I should have known it was going to be to “interesting”, he had a transparency projector brought in for his presentation on “Thieves, Rip-Off Artists and Other Designers – Digital Society’s Garbagemen”. After he made it to the stage with an armload of transparencies, copied from various books and of various arts from the last century and later, he ran through a long talk about art, Yugoslavia and his thesis. Let’s just say it was a long opener. Next up was supposed to be Laurie Haycock Makela from the Cranbrook Academy of Art. I imagine she was going to present her book “Whereishere” but she was unable to make it due to other commitments. I’ll jump ahead to Friday’s presentations and leave out the other presentations which, in my opinion, are not worth mentioning in length.

Friday : Worth mentioning for Friday’s presentations were Eric Adigard, House Industries and Carlos Segura. Eric Adigard is best known for his work done for Wired Magazine. For the conference he presented “Menage a trois” which was about the designer, the medium and technology or in other words a frog, a princess and a lake. Keymessage: technology is your friend.

House Industries followed Erik’s presentation and for the conference they went all out. Three of the six members presented in matching red 70’s style blazers, black ties and black slacks. They proceeded with slides from their funky 70’s style fonts, graphics and wearables. Custom cars are one of the games these guys play and they do it well.

The last presentation worth mentioning was the Chicago-based Cuban born designer Carlos Segura. Besides having his own design firm he is also well known for his type-foundry T26. He showed three trays of stunning work as well as some digital work his foundry is doing. The amount of work this guy does is incredible. Very nice stuff. 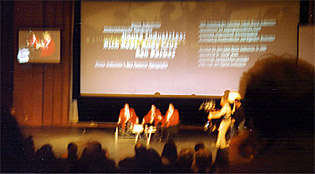 Saturday : After watching Eric Adigard present his print work complete with explanations of what thoughts were put into them, I watched a bit of the House Industries again. This was all going on in the free section TYPOstage. I was later in formed that Tibor Kalman wasn’t going to show, ended-up he was sick, so I spent the rest of the day checking out the former Eastern Block the Berlin had under some major construction.

In the end one would have to ask themselves if it was worth attending. Besides the no-shows TYPO 99 was just basically a lot of eager people looking for some inspiration. And Friday’s speaker gave me the inspiration I needed.