Abstract vocal tunes started to launch for the world from Tokyo. The break beats, techno and abstract label “ns-com” established by Dj Miku (a.k.a. MIK) in 1997. The supervisor Miku, Dub Squad, Ebizoo, Takayuki Shiroishi, Sha’cho Mouse, Dj Tasaka&TA-1, Hidenori Itoh, Stevia (Susumu Yokota), etc. belong to the label and release their works. They attract attentions as a hard-liners group in Japan and also in Europe. Among them, the abstract vocal unit shining brilliantly is Sha’cho Mouse. Their sounds have various elements as classic, ethnic and technology music, and also they fuse Oriental music and Western music. They’re sometimes tricky and filled with playful souls like a toy box. We interviewed with two of them who is now producing the second album. 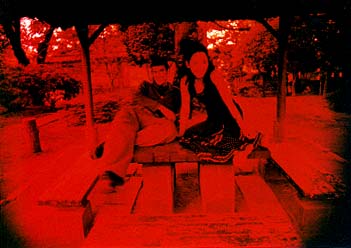 Please tell us the details to have formed the unit. How did you get to know each other?

Tomo: We’d known each other’s face at club. Maya is a big guy, so he was outstanding. When we talked by chance, we had a lively talk on music he’d producing. Then I began to have an interest in him. I cannot help singing because I’m falling in love with Maya’s sounds…
Maya: Me, 2! (Thank you Tomo-chan.)

I’ve heard that Tomoko was going to make your debut from a major label. Why did you choose Sha’cho Mouse?

Tomo: Please listen to the music of Sha’cho mouse. You’ll understand the reason.

What does ‘Sha’cho Mouse’ mean?

Tomo: A president mouse.
Maya: A small thing gets bigger…? Or a big thing gets smaller…? (and shut your mouth) There’re lots of meanings…

How did you meet with ns-com? And why did you choose ns-com?

Tomo: Because they gave us a chance to release our CD. Thanks!!!
Maya: Because we were refused by another major labels…

Tomo: Everything. There’s no limitations. Joy, anger, love and pleasure.
Maya: It’s okay if only everyone can feel something after listening to our music. Feel nice or tired or strange or…

You performed at ‘BIG CHILL’, the outdoor rave in UK. How about the reaction in overseas?

Tomo: Good. I felt their tenderness.
Maya: They listened to our musics from the beginning to the end.

Tomo: Music, dance and Japanese old and good things.
Maya: I like food, cooking and instruments.

I’ve heard that the label party of ns-com will be held on April 5th. What kind of event is it?

Tomo: We’re now producing the second album. And we might hold a live. Have fun.

Their debut album titled “Photo-Synthesizer” was released on July 13 in 1998. In the same year, they performed at “The Enchanted Garden”, the special summer event of BIG CHILL held on August 7-9th in Wiltsher, UK featuring 4 HERO, Global Communication, Ian O’brien, Rainer Truby, Fila Brazillia, Mixmaster Morris and Dj Miku. In Japan, they have performed at some clubs as LIQUID ROOM, YELLO, etc. and some parties as ‘SOUND OF SPEED’, ‘IRO’, etc. They are now producing the second album.