This month Hamburg enjoyed a few warm days and daylight until six at night. Yes, spring is in the air: buds on trees, flowers on lawns that are ever greening and the people are out and about. What went down, was almost always inside. The famed Japanese purveyor of hip hop, DJ Krush, played to a full crowd at the ever swinging Mojo Club. Also on the decks were the English drum’n’bass DJ duo Kemistry & Storm. Not to be outdone, the Fundbureau played host to the Suburban Knight and Underground Resistance member James Pennington. The music was playing if you had the time to listen.

I also spent a weekend in Berlin, and while walking around the former Eastern Block, I happened upon a sign that said Beer Golf . Yes, Beer Golf! Beer golf is an idea by C. Kopac, a Berlin media-artist. In early 1998 the Beer Golf sessions were born with the intent of one day going public. Beer Golf, new to me also, was being played on the ground floor of the two year-old agency Imstall. 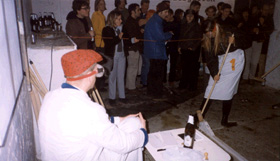 I was there to watch the first tournament of swingers take turns trying to whack the top of a beer bottle into a pail using a broom. Rumor has it that this could be the newest form of new media recreation. Also rumored is the build-up of leagues to play head-to-head in the different German cities.

Next month I’ll be traveling to Berlin, yes again, to attend the Typo’99 typography conference. More to come… stay tuned!