Even after being a student of architecture, a lot of architectural works are still hard to digest or even minimally understand. Especially when it comes to it’s “paper” (only in thought) or “digital” (OK, it’s 1999) realms, it seems most of the thought and visuals can easily be appreciated only if enjoyed the same way as with poetry or music. Not literally understood but definitely within a structure. 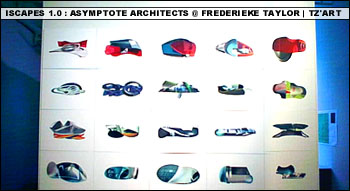 So reading that Asymptote Architecture, New York City duo of Lise Anne Couture and Hani Rashid, had an exhibition called “Iscapes 1.0” of “consumable architectures for a digital culture” imprinted an impression of what that was supposed to look like, or at least feel like.

In the modestly sized, 2nd floor galleries of Frederieke Taylor | TZ’ Art in Soho, Asymptote had constructed an installation consisting of 24 flat LCD screens, reflective glass and metal. As projections of oddly shaped blobs morphed into somewhat more recognizable objects like grids and even what seemed to be household appliances, I wondered how this could even be considered architecture.

But after much staring, the debate of what architecture is was not so important as was the exploration of shapes that I was experiencing. The LCD screens projected and glass panels reflected what looked like brightly colored soft chewed bubble gum at one point and hard rigid structures the next.

And if anything, the whole installation seemed to be weaken by written explanations like “a space between the possible and the familiar, departing from chance operations”. Trying to tie a rigid interpretation or searching for a hard source of where the shapes were derived from was missing the point. I just wanted to hold one of those shapes and take a bit into it, possibly to taste some fruit flavor – only to find out a second later, that I bit into metal. The feeling was not unlike my initial reaction upon seeing the new line of Macintoshes, but this was supposed to be architecture.

Asymptote is also having another exhibition going on until late March called “OffSideOn” at the Henry Urbach Architecture Gallery in Chelsea.