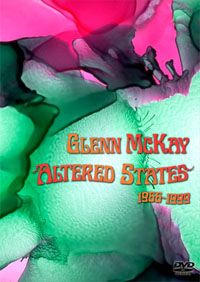 Glenn McKay, a visual artist who created the psychedelic visuals for Airplane’s Liquid Light Show back in the 60’s, has launched his retrospective exhibition at San Francisco Museum of Modern Art (SFMOMA).

Titled as “Altered States,” this exhibition brings the dream-like flashback contents, recreating the acid-age experiences from the 60’s with his slide and video projected works. Literally Altered States turns the gallery space into hypnotic, mind-twisting ambiance with a full spectrum of light and sound pulses.

McKay puppets light and time as his primal media, using combination of transparent inks, dyes, water based and oil based paints hand-painted on slides and other transparent surfaces, and projecting them in various sequential manner on a large screen.

The result of using such analog process bring organic quality and almost random like spontaneity to his works. Altered States may throw refreshing inspirations to those who are tired of seeing digital overflows in the today’s graphic scene.