Based in Vienna, Austria, Mego is a techno label whose music draws a sharp distinction between so-called “techno music”. Including artists such as Tina Frank and Farmers Manual, 6 units of Mego artists gathered in NTT InterCommunication Center [ICC] and held concerts for 3 nights in January. 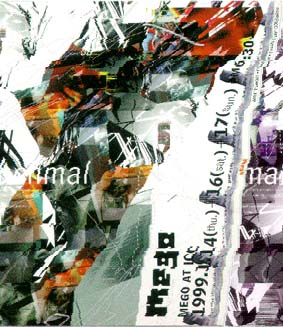 Featured artists were: Pita, General Magic (an unit by founder members of Ramon Bauer and Andi Pieper), Fennesz (who also sings and plays a guitar), Farmers Manual, Haswell, Skot (does visual works). There were other groups including Rehberg & Bauer (Pita and Ramon Bauer), Fenn O Berg (Fennesz, Jim o’Rourke, Pita) and POP (Pita and Zbigniew Karkowski). Each live performance was done by different artists or units for 3 nights, and the finale live was taken by 2 artists by Pita and Haswell, with 2 guests of Fenn O Berg and Filament, a unit by Yoshihide Otomo and Sachiko M.

Launched by Filament, the Mego live session was started by the trio of Fenn O Berg, who sat at the tabel to play Power Macs. Moderate mixed sound of digital noise and cut up of the piano or the xylophone sound was filled with the dark room where both audience sitting on the floor and the trio playing Macs were, with the sound, creating the eccentric atmosphere. After a while, my ears caught the familiar sound of, I guess, the TV advertising “shopping” song for Seibu department store. Repeatedly the “shopping” song was interwoven into the electronic sound for a while and the play by Fenn O Berg was over while I was stuck with if it was really “shopping” song or not…

Next was Haswell, whoes striking digital sound roared into the ear. With the visual impact of the kaleidoscope-like video works, his exciting play overtook all senses of mine. It was really hard to bear just sitting down on the floor (almost wanted to dance) while my ears and eyes were transfixed with the roaring sound and the black and white graphics on the screen. The finale of the whole live was capped off by Pita. Unlike to Haswell the pulse signal with the high frequency digital noise sounded over the room where a number of audience seemed to listen attentively to his minimal play.

The whole live lasted for 2 hours. Besides the live at ICC they did live performance at several clubs in Tokyo as well. As Mego approaches the potentialities of the digital sound (noise techno), the advent of new ganre of “dance music” might be around soon in the near future.