Here, Newspapers like to say that Paris is no more the museum it used to be compared to the great and alive cities of Berlin and London. Paris wakes up and try it’s real ‘coming out’ in the digital age. Nov 98 will be remembered as the month where techno became more than a mass more or less underground movment : a state affair, a cultural market, and more than this a new paradygm in experimental music.

After the parade in September with more 100,000 people dancing in the street, we had that famous Global techno party, which intended to be the french version of the Sonar festival in Barcelona: Hi tech DJ krews, multimedia art and digital culture. At the HUGE La Grande Halle De La Villette 7,000 people at the maximum (self estimated). There could have been 25000. This was not exactly a failure. It was at least a real fun (quite rare in official huge parties) and a very warm atmosphere. We can just now regret how nothing was really organised to propose to the ravers more than just another 120 francs party. Next years all of this has to improve. 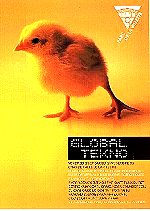 DMX Crew and Optical where there for the underground electro/jungle sounds. Those were shaking ass, really. Special thanx for the 10 minutes coughing human beat box and Alec Empire-like screaming of those dmx dj’s. We won’t forget about it !

Now that techno is a market it becomes an “affaire d’e’tat”. Police has special orders about rave parties while big institutions try to make it a cultural thing. We could see how Global Techno was actually or ganised by the “ministe’res de la culture”. We discovered how the new composer’s work at the famous contemporary music lab IRCAM deals now with digital culture paradygm.

I mucho mucho appreciated the work of Andrea Cera: trying to mix the techno popular feeling with “la musique savante” (Studied or contemporary Music). Just the day before, the Goethe institute was showing the best of it’s underground digital ambient troops: Oval, Microstoria and Christophe Charles were all playing their special “electro acoustic ambiant” mix; Gazing not their shoes as did some pop rocker from england not so long ago, but their Mac G3 with special Audiosofts (Christophe Charles, french living in Tokyo is using the IRCAM well estimated midi/audio soft “Max”).

Nothing to see really, but probably the best thing we heard for a long time.

This strange TechnoArt vs TechnoCulture month, is brightly concluded by the live of Pierre Henry, composer of Musique Concrete for 50 years. Architect of the multiplatinum “Messe Pour Le Temps Present” and it’s hit single (yes the only hit in the story of musique concrete) “Psyche’rock”. He was last year remixed by Saint-étienne and a bunch of house english DJ’s for an hommage, quite crapy, compilation. He now plays at la Cigalle for a special live remix. Let’s hope it won’t be another disguised simple dj set. The venerable old electronic/acoustic mixer should do more with toys like a sampler. The promotion around him is so big we can conclude a pop star is born. “La musique concrete” get merged into pop culture, techno is merged into contemporary art questionnement, and this is perhap’s where the real “french touch” is taking roots.

Following that idea, many thanks to le Centre Georges Pompidou for this new art data base, “l’encyclope’die des nouveaux” in three languages, with video, audio and real information about new media artists. Great job, exciting times.