Friday late afternoons at the Solomon Guggenheim Museum are free or rather have an open donation admissions policy (“pay what you want”), so I made my way up to the museum and waited on a long line wrapping around 88th Street. It was the last weekend showing of “The Art of the Motorcycle” exhibition. Although supposedly largely criticized by art connoisseurs and even neighbors of the museum that the Guggenheim was showing objects not related to art and possibly attracting unwanted visitors to the museum, it was still a pretty bad ass show, and in fact, probably one of the better and more successful exhibitions they’ve had in a while. 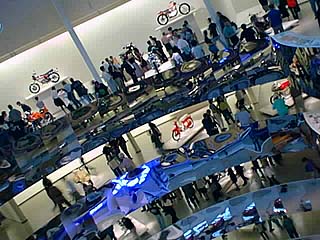 The show exhibited over 130 years of amazing industrial design and engineering of motorcycles. Initially walking into the base of the Wright designed spiral space, there was glimmering reflections everywhere from the metallic details of the motorcycles but mainly from an installation by architect Frank Ghery. It seems as if after Bilbao, Ghery’s been excited by shiny curved surfaces and Wright’s Guggenheim interior was the perfect place for it. The entire interior spiral was covered in a reflective funhouse-mirror-like panels. It was disorienting just looking at the reflections while moving through the space.

The exhibition was arranged chronologically in about 8 time periods up the spiral, but I didn’t really seem to pay attention to the historical aspects of these machines as much as I did to the individual details of the motorcycles. That is not to say that seeing the 1868 French Michaux-Perreaux’s steam engine just attached to a bicycle or Gottlieb Daimler’s wooden cycles did not make me realize the historical significance of these motorcycles. But the strength of the show really seem to come from having beautiful industrial design to look at that the layman could understand and appreciate.

The exhibition was comprehensive of the motorcycles shown with most of the models from all over Europe, Japan, and America – Triumphs, Hondas, Harley-Davidsons, Ducatis, Vespas, Indians, Kawasakes, BMWs (also the shows main sponsor). Some of the bikes that attracted the larger crowds were the 1937 BMW World Land Speed record holder which was encased in a white fish like aerodynamic case, the 1969 Harley-Davidson Easy Rider Chopper that Dennis Hopper rode, and the Phillippe Starck conceived Aprilia Moto 6.5 with its sleek orange and gray design. It was also interesting to see Jerry Seinfeld wondering around by himself admiring the motorcycles.