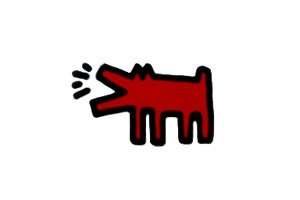 The night on May 30 was the night of PoP, a celebrating event of art and life of Keith Haring, which has held at San Francisco Modern Museum of Art (SFMOMA). Surrounded by people in a long line, SFMOMA turned out to the 80’s disco featuring 2 massive sounds, games, visuals, etc., along with the Keith Haring Retrospective.

As I went through the gate, which was protected by cyber terrorists etoy, the first thing welcomed me was house beat sounding the entire main atrium. The rhythm of deep house made me feel the need to move myself on to next and I soon went into the small space where dj spinning drum’n bass music. While some were dancing, chaos atmosphere was created by the websurfers with serious faces sitting at the computer station and facing to the monitors. The speed of drum’n bass sound was fast enough to catch up with the speed of T1-powered computers.

The main features in both – house and drum’n bass rooms were film and video projections by BLASTHAUS and Web Design Group – mdmax.com. Among PlayStation game projections provided by PlayStaion Magazine and low-tech games like Pong by b.o.l.t (bureau of low technology), 3D dancing characters (provided by PSM I think) were super cute!

Potbellied bear showed his amazing dance technique and was the best dancer of the pop night. Of course there was the Keith Haring exhibition, which was held quietly 4 floors away from the crowd of people down below. The exhibition included various art works like sketches, drawings, paintings, sculptures and a video screening of the electronic billboard installation. Pop, high-tech, and low-tech. Embodying all aspects of “POP”, the event PoP featuring art, performance, Djs, and film, continued until 3am.