The definition of anarchy is, “a state of society without government or law”. To some, the idea of anarchy is a frighting chaotic existence where order and normalcy doesn’t have a place, but for the fifteen-thousand who gathered in a Nevada desert for a week, anarchy became a utopian society of boundless possibilities. Anarchy became a process of communication and realization – we all realized that anarchy is the root of creation. 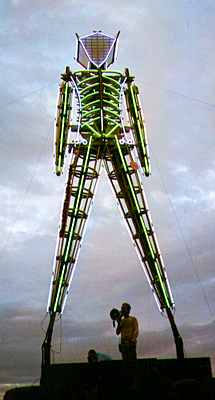 The Burning Man is a festival that began ten years ago on a beach in San Francisco – then a very small gathering. I’ve been told the idea of burning a ‘man’ represents burning the ego of oneself or the ego of the human race, but it’s free for everyone to have their own interpretations. On the last day of the festival, a 50 foot wooden ‘man’ is burned in an overwhelming display of pyrotechnics. 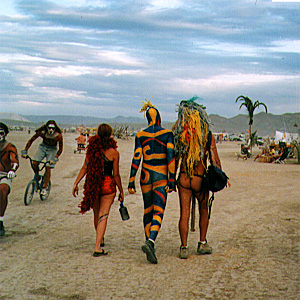 The festival lasts about a week, but for many it lasts for more than a month – with weeks of preparation and construction of installations to burn. Some of my favorite installations where; The Temple of Ishtar – a 80 foot medieval sculpture, a spiral ‘ammonite’ shaped tent you can walk through until it becomes so small, you have to crawl to reach the end, and a do-decahedron ball with a racing chair suspended in the center, surrounded by speakers – you sit in the chair and people push you around. 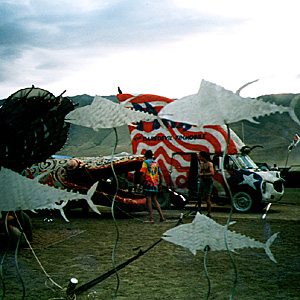 Bizarre and unlikely vehicles are a mainstay of the festival. Some of my favorites from last year returned such as; the motorized couch with matching remote control coffee table, the shark car, and rocket powered go-cart.