What is art? That is what American artist John Baldessari (1931–2020) started to wonder about during the 1960’s at his hometown National City outside San Diego, in California. His mindset of re-examining what art can be and challenging artistic norms led him into a body of conceptual artwork, often with a streak of humor and irony. During this time, New York City was the center of the art market and Los Angeles was more like an experimental artistic hub.

His exhibition at Moderna Museet in Stockholm spans his entire career from the early 1960’s ranged from early paintings to video art and the combination between images and linguistic explorations as a central theme. As matter of fact, Baldessari came to the realization early on that a photographic image or written texts were better able to express his artistic intentions rather than a representational painting. His work became more known for combining appropriated images and challenging the rules of composition. Moderna Museet’s curator Matilda Olof-Ors believes John Baldessari was one of the most influential and innovative artists of our time – “Baldessari passed away at his 88 while working on this exhibition and it is incredible sad that we cannot share this exhibition with him but we still are incredibly happy that at least we were able to showcase his work at Moderna Museet,” she explains. 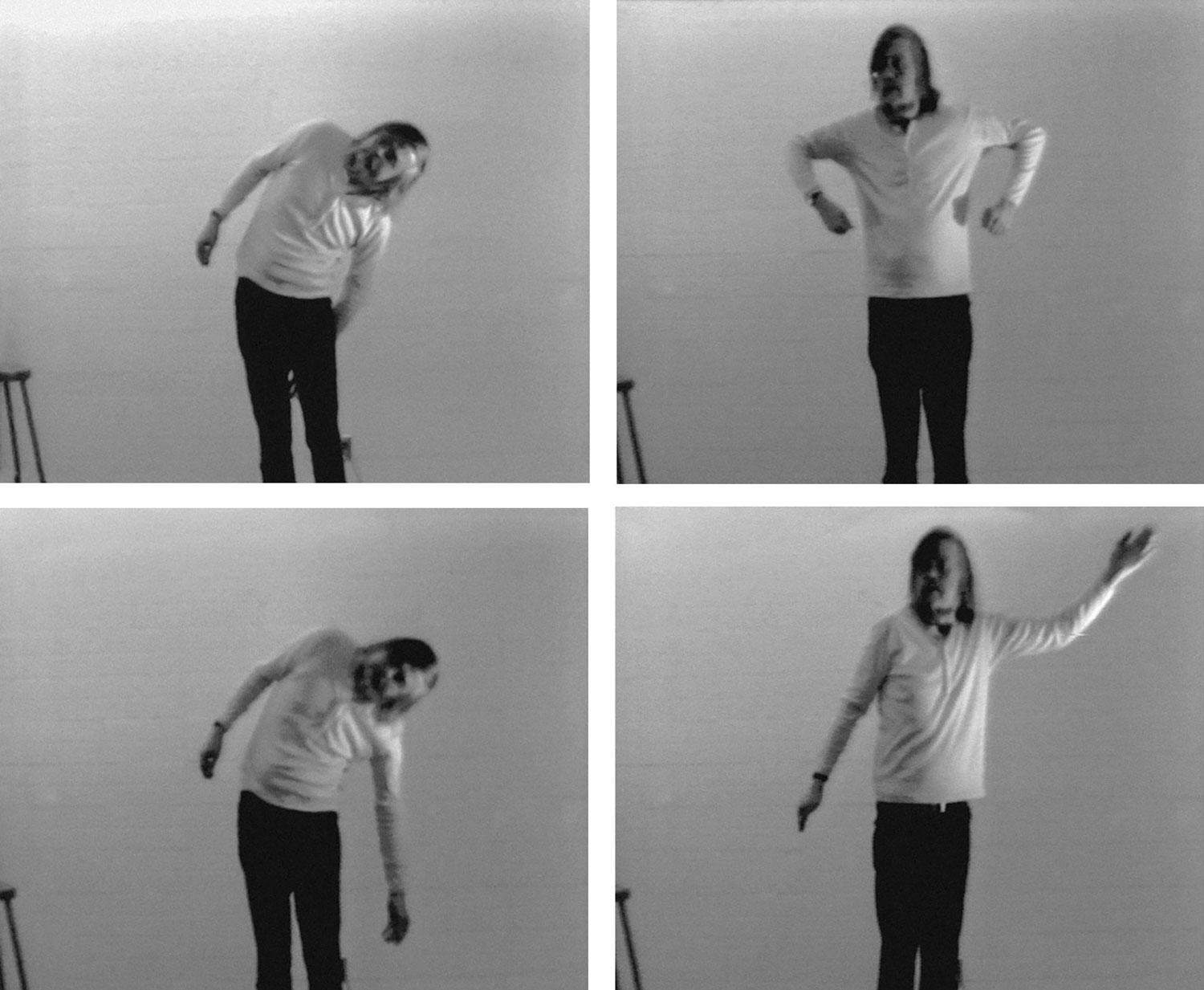 The first thing you see when you stumble upon the exhibition is a TV screen with Baldessari repeating in loop the sentence “I am making art” while making choreographed movements in time with the constant chatting of the statement. Who has the right to make art? He emphasizes the sentence in different ways which raises the thoughts about the ambiguity of “making art” and again “making art”.

The fact that Baldessari operated in the West Coast at the time New York was the bombastic center of the art market created a more isolated world to operate, which provided greater freedom to the artist, more room for experimentation, so to speak. Baldessari coined the term “artless art” which can be translated as “unaffected” or “unruly” type of art challenging the common rules of art. Baldessari defined his artistic labour “My goal has always been to attack conventions of seeing. The work is about seeing the world skew.” 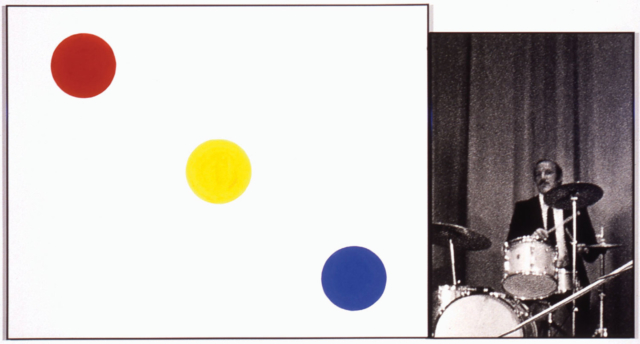 He is interested in the interaction of elements rather than a specific image or thing by bringing these elements together under the same composition. This is the reason he was interested in working with combining elements from our everyday life including elements from art history and popular culture. Furthermore, in this exploration of combining appropriated images Baldessari got into covering the faces of the characters in the photos with round color stickers or paintings, which is one of his more significant works. In the 1990’s, color started playing more prominent and independent part in Baldessari’s work. He described these round dots to cover faces as a form of color coding in which each color represents a certain feeling or state. Drummer (With Choices) could possibly repent the possible sounds the drummer could make. 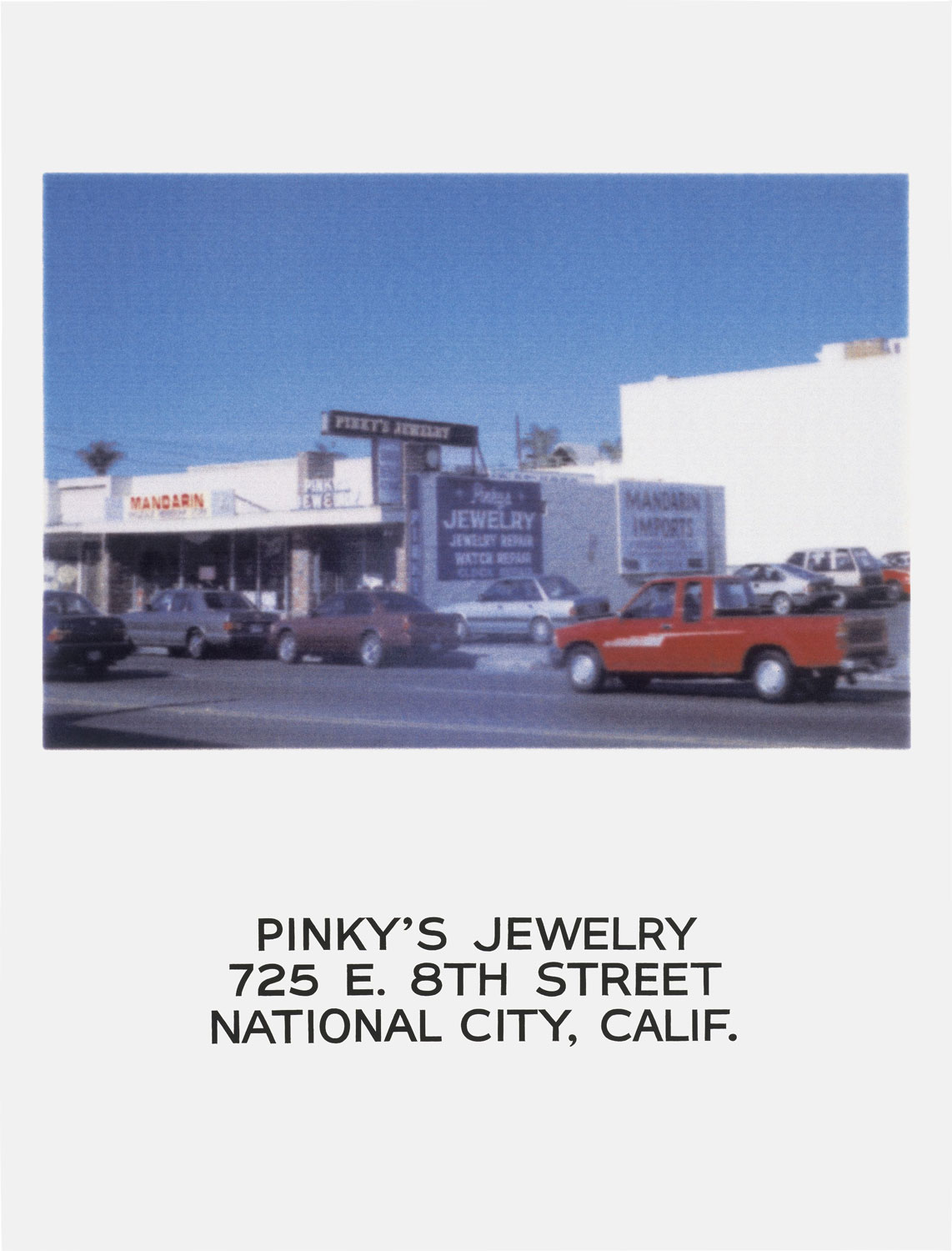 In the 1960s Baldessari photographed his hometown from his car with one hand in the steering wheel and the other with his camera. Then he put it into a painting writing the address below. The text and the photograph speak about the same thing but give us two different ways of understanding the same thing. In 1996, Baldessari went bak to his hometown in National City and took some random pictures as he used to do but this time in color. This is only work which seems to be not what Baldessari became known for. However, the fact he documented these images thirty years later gives a different dimension to the images.