A more humorous and direct engagement could be seen from Shiriagari Kotobuki whose parodies of Hokusai’s series “Thirty-six Views of Mount Fuji” (Edo Period/19th century) was featured side by side. “Nearly 36 Somewhat Ridiculous Views” (2017) features a close resemblance to Hokusai’s original Edo Period landscapes with the exception of some playful modern elements such as drones, salary men and razors. 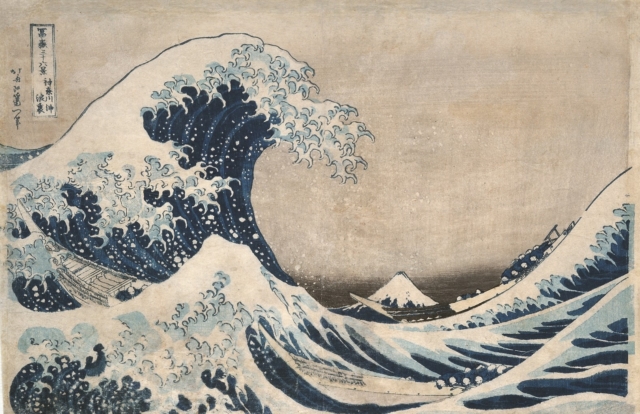 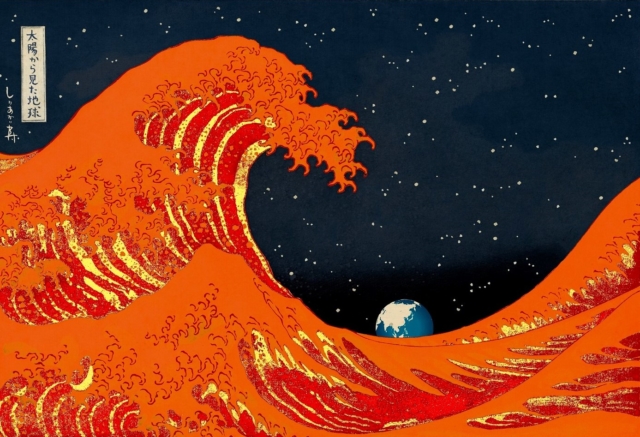 Up: Hokusai Katsushika, Thirty-six Views of Mount Fuji (The Great Wave off Kanagawa), Edo Period (19th century), Kuboso Memorial Museum of Arts, Izumi (*)
Down: Shiriagari Kotobuki, The Earth as Seen from the Sun from the series Nearly 36 Somewhat Ridiculous Views, 2017, Collection of the artist (*)

The relationship between the two artists are not always as explicit as in Tomoko Konoike’s works positioned next to traditional Japanese swords. Konoike’s “Drop Curtain of Cowhide” (2015) is a 6 meter high and 24 meter long curtain composed of cowhides stitched together to make a canvas suitable for paintings. The audience is asked to consider the relationship between the Konoike’s piece with the swords which are both a violent weapon and useful tool. 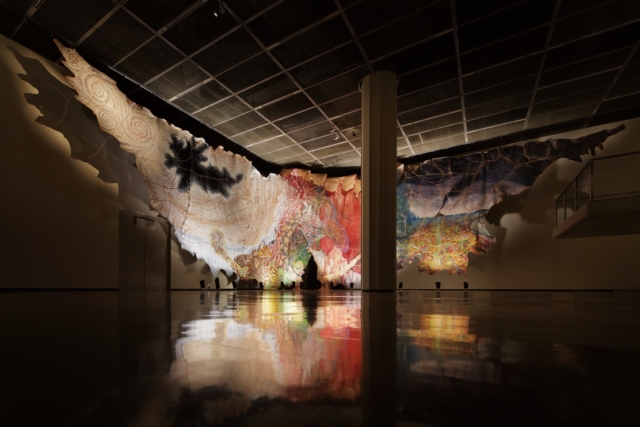 The lack of uniformity in the display and relationships between the works was one of the biggest strengths of the exhibit. “Timeless Conversations 2020” illustrated various ways in which the past can relate to the present and vice versa. The organization of the pieces as well as the available texts works to guide the audience through the exhibit and allows for a more multi-layered reading to the works.

*Exhibition period of those works has already ended.