Experimental and contemporary music is not for everyone. Due to budget constrictions, music and art spaces need to find a successful formula for a wider audience. Directors of Skanu Mezs Festival 2019 in Riga, Latvia – Rihards T. Endriksons and Viestarts Gailitis – are very aware of it. Surprisingly enough, on its 17th edition this year, they decided to push the boundaries a bit further by programming a more difficult selection of contemporary music, and it makes them very happy to see that their audience is ready to go along with them. To increase the brand recognition has been the only way to go for music festivals during these last years. A solid identity provides strong credibility and lesser known acts acquire the opportunity to perform for larger audiences.

About 2,000 people enjoyed the 2-nights event. Over the years, they have built a reputation for both the audience but also a word-of-mouth between artists – thus, many contemporary acts and avant-garde composers want to perform at this festival. People like Michael Gira from Swans, Aaron Dilloway ex member of Wolf Eyes, Manonmars feat. O$VMV$M, Alvin Lucier, Lucy Railton, patten, and Terrence Dixon among others made a special set for Skanu Mezs (which can be translated as Sound Forest) this year. 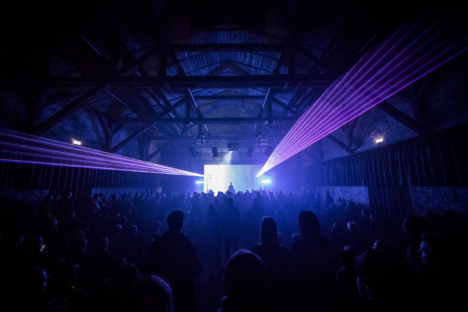