In Berlin, we hear news that buildings are being demolished everywhere, and traditional live houses and club bars are closing and moving out. Today’s stage is Kraftwerk Berlin, which has a strong presence on the side of River Spree. This place pays homage to Berlin’s techno culture and subcultures as if the scenery of Berlin, the rapidly changing city, was kept, in addition it still starts new projects every day.
This time I visited DEEP WEB which was held from 12th July to 23rd August at Kraftwerk Berlin. 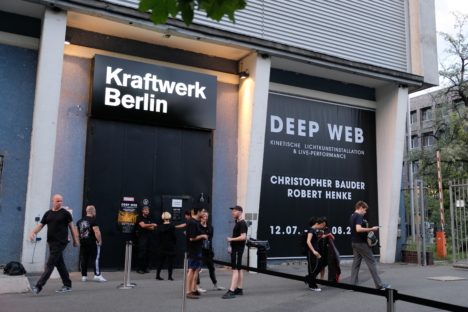 DEEP WEB is an audiovisual installation and live performance created by media artist Christopher Bauder and one of Ableton Live‘s oldest developers and monolake members Robert Henke. At the CTM Festival in Berlin in 2016, the small-scaled installation was presented at the beginning, becoming the festival’s best highlight.
Three years later, it has became a huge machine again and returned to Kraftwerk Berlin, where we have seen posters throughout the city.

Throughout the exhibition period, apart from installation, there was a live show performed by Christopher Bauder and Robert Henke for four days exclusively.

On the day, you can go there from Heinrich-Heine-Straße station and head to “Cathedral”, also named ‘The Mecca of Berlin’. The huge building gives you a bit nervousness by the coolness of the room inside, which you can feel it once you open the heavy door.

This former thermal power plant is protected by rugged concrete and heavily wrapped. Get a beer at the bar on the first floor and watch the adjacent “Stage Null” while waiting for the performance.
After this, Berlin’s huge music festival Berlin Atonal began, and audience from all over the world were longing for thrills.

The room was filled with crowds very quickly. Not only the stylish young people, but also my parents’ generation and the elderly… The audience of DEEP WEB was in a wide range of generations as if the audience who visited a museum. It was very interesting.

When I climbed the stairs to the second floor, I felt a little scared because I felt that I would be falling into an extra large gap. The atmosphere of the entire venue was a good fit for this event.
There must be a reason why they chose this place with a lot of facilities. I felt like I wanted to hear my heartbeat. 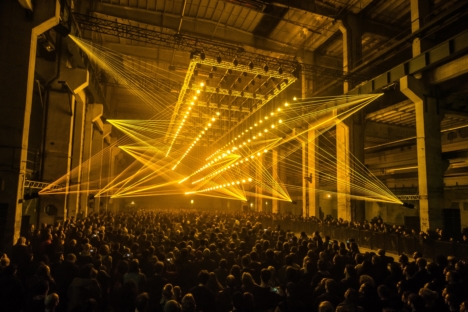 Live performances can be enjoyed while sitting on the concrete floor or lying on the floor, and the venue turned into dark quickly in a quirky atmosphere but feeling relaxed.

The exciting 60-minute live performance is totally different from the regular programmed installation. Hundreds of illuminants and huge, amorphous sculptures were flying above the audience.

It was a mysterious scene that many spectators and people looked up at the ceiling while feeling the coldness outside and the smoke when the air touched their skin.