The 6th edition of Yokohama Triennale, Yokohama Triennale 2017 was held from August 4th to November 5th at Yokohama Museum of Art, Yokohama Red Brick Warehouse No.1, and Yokohama Port Opening Memorial Hall. The title of the exhibition is “Islands, Constellations & Galapagos”. They are keywords which open to multiple interpretations, such as isolation and connection, creativity and sign posts, originality and diversity. This Triennale shares ideas of how to utilize human creativity and imagination for the future. 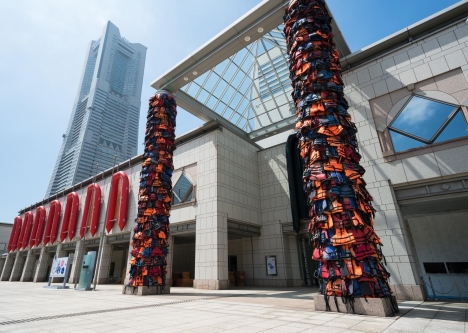 Giant installations at the entrance of Yokohama Museum of Art were “Safe Passage” and “Reframe” by the most influential contemporary artist of China, Ai Weiwei. The contras column was filled with life jackets. On the wall of both sides, life boats were lined. He has worked on the refugee problem since the end of 2015 . The life jackets, which were used by those refugees, recall the tense situation and background of the problem. 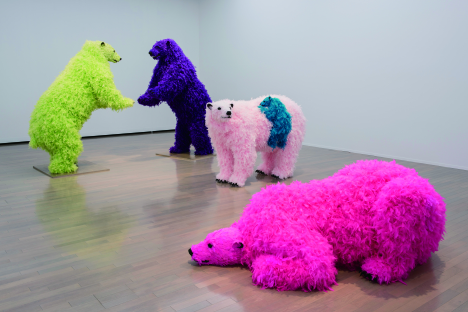 Paola Pivi “I and I (must stand for the art)” and others, Photo: Yuichiro Tanaka Courtesy the Artist and Perrotin, Photo Courtesy of Organizing Committee for Yokohama Triennale

An Italian artist Paola Pivi, whose works gave a sensational impression at Venetia Biennale also exhibits a large installation of photogenic bears. Each works of bear has a different name. For example, yellow-green and purple bears in the left corner are “I and I (must stand for the art)”, a pink one with a baby bear in the center is “I Love my zizi”, and a deep pink bear in the front is “Tell me when you’re ready.” They are inspired by bears existing at her home, Alaska. 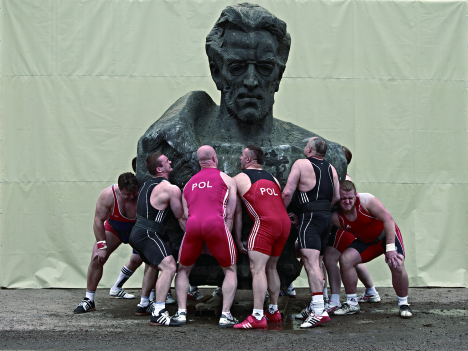 In the Yokohama Red Brick Warehouse No.1, the installations, which focus on history, were outstanding. Christian Jankowski, who is known for humorous and sorrowful photography and film, showed a film called “Heavy Weight History” that Polish weight lifters lift heave statues of various historical legends of Warsaw. The macho men and a cheerful reporter raises people’s laughters. The reporter says, “alright, they are going to feel the weight of history! physically!” and when a statue slightly moves, he loudly reports “now, the history is moving!” At the end, “we are proud of moving the great history,” the lifters seriously comments. The strange balance of humorous reports and serious attitudes of the lifters is funny, but the title also reminds us the heavy weight of history.