In contrast to the powerful branding by the mass production that moved the age, the presentation by Panasonic from Japan drew attention by showing the product design tuned with technology but more human oriented concept. Panasonic, conducting R&D from Osaka, teamed up with a craft manufacture in Kyoto “GO ON”, which lasts more than hundreds of years, and they attempted to design modern appliances for daily use with the spirit of craftsmanship. Panasonic is the leader of current appliance industry; the old manufacture in Kyoto had been the leader before the industrial revolution. The forefront and the tradition are a fusion of technology and craftsmanship. How the technology told a story about “Thing” through the traditional “Skill” was highly evaluated and it leaded to winning the best story telling award in the Milan Design Award.

The Bluetooth mobile speaker utilizing the covering of canisters, the bottle cooler making use of metal balls instead of ice, and white procaine pot boiling water by IH – the combination of the great work of tradition and implementation of the latest technology by design sublimed “MAKE”, which anyone can create, to the more authentic “Thing”. This phenomenon brought an expectation for appliances for the next generation, which is differ from the current “Shenzhen style” that a project immediately turns into the infinite number of products and sweep the world. 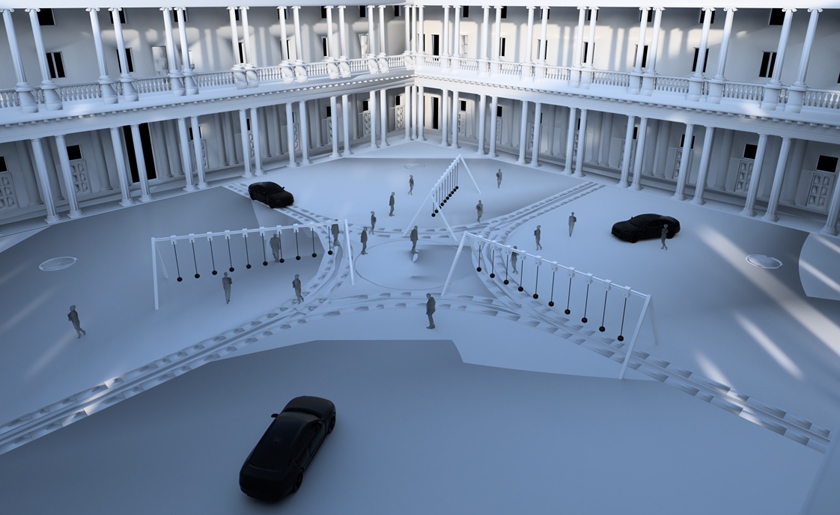 A technology artist, Yuri Suzuki who is based in London, designed “Sonic Pendulum”. It made us feel the powerfulness of technology. This huge-size work was for a German automobile cooperation, Audi. The behavior of pendulum, which was placed in three rows in a garden of a big monastery, created a musical scale. The ambient sound echoed from a 360 degrees sound system surrounds us.

Sound design was done by Nao Tokui, who is a technologist based in Japan. The swinging pendulum, and the sound created by them gives a strong impression bringing us to the unordinary moment. The work immersed us through sound and visuals.