After her opening music performance, Miwonderful’s makeup lesson was started, using plates like full course setting on the table. 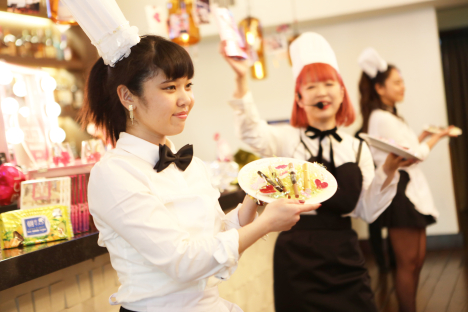 All the cosmetics used in the lesson were from a Japanese cosmetics company “BCL“, and the participants were able to take the sample items. Many items of BCL’s products are not yet sold in the US, I heard from many participants that they wanted to use it as soon as they had a trial in the lesson. 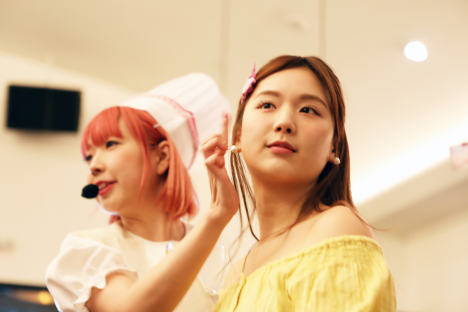 After having lessons of facial masks as an appetizer, foundation and cheek blush as side dishes, a tutorial video was playing in the lesson and a popular model “Fee-yong” from a Japanese video posting website “C-CHANNEL” appeared. She was also a guest and demonstrated the makeup. 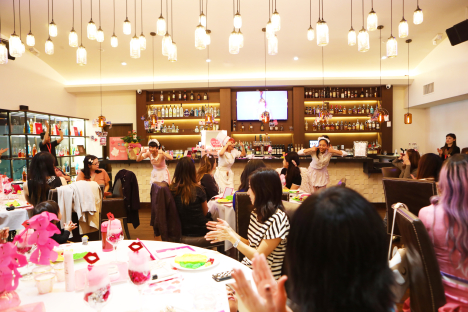 Then, before eye makeup as a main dish, Miwonderful performed her original song “Cheek Party”. Visitors enjoyed the choreography of the catchy phrase “One-Two-Three from Eye” according to the dancers’ movements. 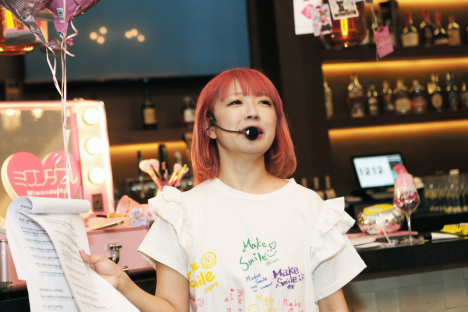 Finally, she sang her new song “MAKE SMILE” which was also performed in Tokyo. While holding back tears following all greetings, Miwonderful made a speech in English wrapped up the venue with a warm applause of the visitors and the restaurant closed.

Singing and dancing shows between lessons are popular in the United States as there are performances in sports’ halftime. Her show is hailed as a creative “Extravaganza” heard from the visitors and received good comments as an entertainment.

It takes some time when she talks she wants to stand in the world. I am pleased that I actually set it on the world stage. Miwonderful’s “Makeup Restaurant” is not just a make-up lesson, it is also a participatory art project. It will be a great confidence for her because her performance is accepted in America, the home of entertainment industry. Her challenge has just begun.