“Passage, a small street or shopping streets with a roof that connecting big streets, has been often seen in Paris. Especially in Paris, passage means meaningful to those artists avant-garde for “Flâneur” who wander around to discover various events. At the same time, this is also a metaphor of the quote, “a private territory could be a public territory” by Walter Benjamin. This exhibit reflects attitudes of twelve artists who live in France. Their works have strong characters and privacy along with their attitudes towards politics, society and daily life. Art is now making a drastic change towards the next century. This exhibit could be called as a passage, a path to the 21st century.”

This is a quote from an outline of “Passage: New French Art” held at Setagaya Art Museum in 1999. This was the first exhibition in Japan that introduced Michel Blazy*, also it explained Michael Blazy’s art style which hasn’t changed until today along with mixture of feelings of the eras and excitement of welcoming the new century. 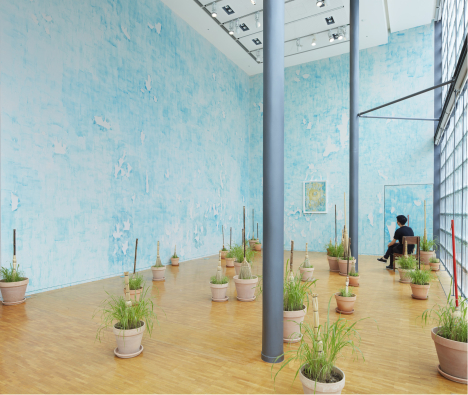 Even after 2000, art world is still being influenced by art market that carries unchanging excitement. On the other hand, as if it is responding to the chaotic world, artworks that show politics and social issues receive people’s attention in Japan. However, since majority of such artworks tends to have critical perspectives only, they are lacking uniqueness as an art piece. These artworks provide an impression of being pushed by trend and being a wreck. Maybe since artists feel that they are lack of power to the reality, they create different directions of faces from their happiness or emotion itself . It could be said that it is the current movement of art. However, is the art style expected at “Passage: New French Art” still valid? To find an answer of this question, I was longing to this exhibition “Living Room II” which shows Michel Blazy’s current works in one place. 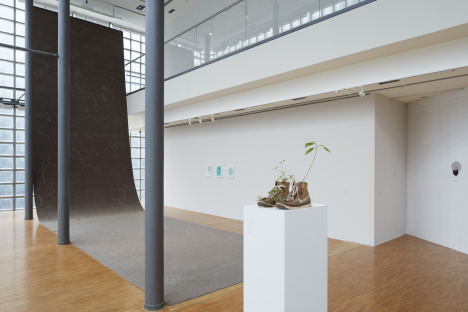 While the venue, Ginza Maison Hermès Le Forum, is a place to enjoy art, it is changed into more comfortable space like a living room as the title implies. Since it is not designed as a white cube style and actually it has a quality and an open atmosphere, audience feels more natural to see the carpets and plants there. By creating the environment that daily life and art can naturally coexist, audience can enjoy the visit by viewing and appreciating art, and the private and the public. 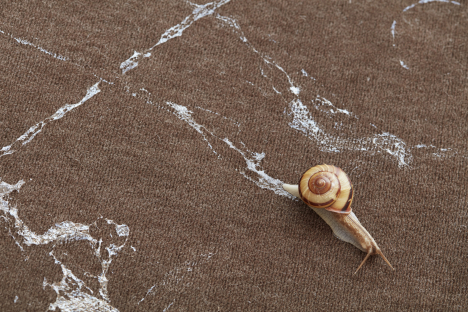 This space is filled with Blazy’s unique works: a painting on a carpet goes from floor to ceiling decorated with an art made snails’ secretion, an constantly-changing art form with red wine encroaching a white wall, a painting created by a mouse biting the foundation made of pistachios cream and chocolate. While Blazy planned the image for these artworks, the results are made by someone else but not him. This creation style implies Blazy is intenting to cross the space between himself and others. 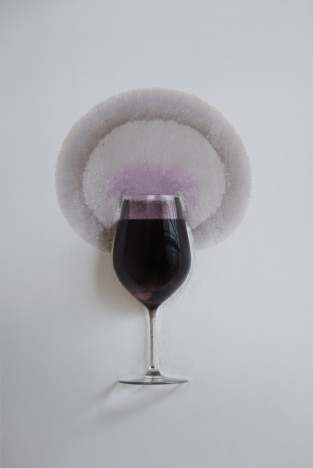 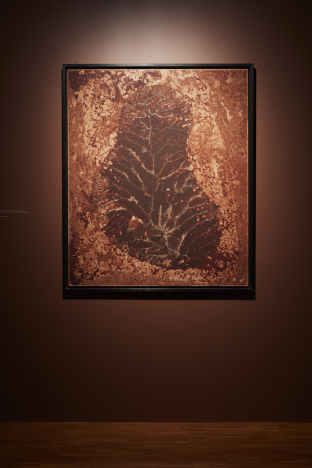 There is also a series of works that implies cycles of continuous changing life: the growth of bloom corn seeds blooming in a pot; a wall painted in blue getting faded and peeled by sunshine; framed drawings with unexpected results by soap and bleach finishing. 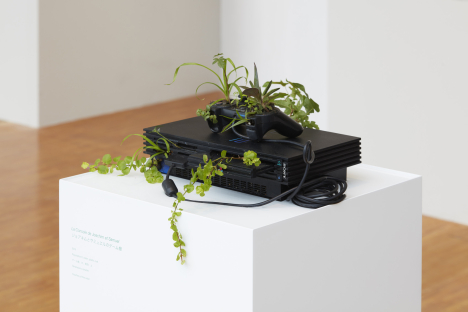 Since Blazy’s perspective is filled with pure curiosity, it provides audiences with happiness and surprises. After enjoying his art, audiences will slowly face into issues of our society and art scene hidden behind his artworks. Therefore, they want to bask in the feel of his art for a long time. Because of this idea, the role of art which was expected for “Passage: New French Art” is still valid even for the current era.