19 athletic warrior monks from the world renowned Shaolin Temple have teamed up with director and choreographer Sidi Larbi Cherkaoui to create an exciting new performance. Cherkaoui is best known for working on Cirque du Soleil’s “Michael Jackson ONE”, the Opera Ballet’s “Bolero,” co-creating “Apocrifu” with Dries van Noten and for actor Moriyama Mirai’s “TeZukA” and “PLUTO”. His latest, “Sutra,” was shown in Japan for the first time on October 1st and 2nd at Bunkamura in Shibuya, Tokyo. 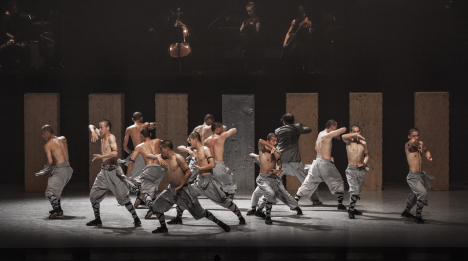 Always the center of the dance world’s attention, Sidi Larbi Cherkaoui stayed in a Shaolin temple for two months, overcoming national and cultural differences creating a performance with the monk’s based on their disciplined training rituals.

For the stage, Antony Gormley, winner of the contemporary art world’s most distinguished Turner Prize, designed a set that astounds at every turn.

The Tokyo performance was a special version that had Sidi Larbi Cherkaoui himself in the lead role rather than the usual overseas cast.
*Unfortunately, Sidi Larbi Cherkoui was injured and unable to perform during the October 5th and 8th performances in Nagoya and Kitakyushu. The regular lead for overseas performances, Ali Thabet, took his place. 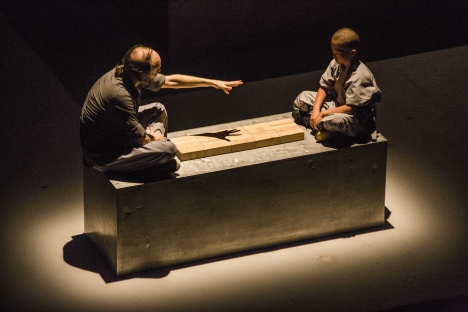 Cherkaoui twisted his hands above the carefully placed boxes as a lone monk appears above the boxes behind him and begins to dance in conjunction with his hand.

It is as if Cherkaoui is manipulating a marionette. There is not a word of dialogue. There are many abstract expressions and the performance is littered with scenes that arouse the imagination where viewers are entrusted to come up with their own interpretations. 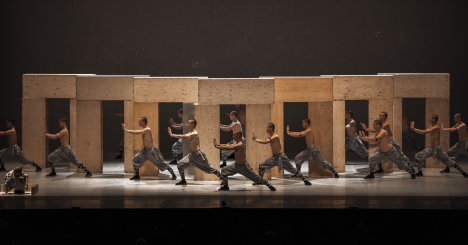 After a little while, adding to the ensemble’s vibrant performance, monks began to emerge from the boxes, starting a group dance that heightened the energy in the room. The performance unfolds a masterpiece based on the monk’s pursuit of mastering Kung Fu as their lifelong goal and the daily spiritual and physical training they endure.