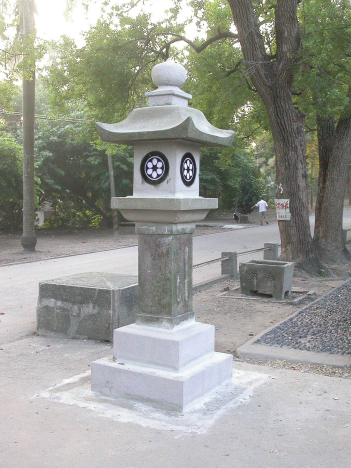 Okamoto: I undertook a project from 2005 to 2006 where I restored Shinto shrines in Taiwan. It became a huge deal in Taiwan and I hope that was the first and last time, but I also received death threats. Around the area where I was staying as an artist in residence, I saw that there were Shinto shrine sites, so I went to look for them. Then at a coffee shop terrace, I was told, “you’re sitting on the stone.” I thought, “how sacrilegious,” since I am emotionally attached to Shintoism, and thought, “I have to do something.” I consulted Mr. Chin, who’s like a local walking encyclopedia. I was worried he’d be mad, but with teary eyes, he said, “I’d been waiting for you.” Mr. Chin then introduced me to various people and after conducting research for two months, I started the Shinto shrine restoration project.

Intending to restore everything in their original sites, I looked up the locations of the shrine lanterns and the ablution basin. But the project became a bigger issue than initially expected. There was strong opposition from people who didn’t think well of the time of Japanese rule of Taiwan and I was soon receiving death threats. Other artists in the residency program also started feeling anxious. I thought it was bit of an overreaction, but there was a lot of tension in the air and it was tough. I held dialogue sessions with the local community to explain the project and thanks to Mr. Chin, who is a major figure in the community, we came to an agreement that “the shrines can exist as part of the history of the area,” and I was given a budget as well.

In the end, it became a project of Kaohsiung County of Taiwan. Afterwards, a proper explanation panel was built in front of the restored shrine. It’s a bit ugly, which bothers me a bit, but I was happy to hear that it is used as teaching material in the local elementary school.

Sakuta: I read the discussions, it seemed like the local community has taken over the project and it’s become their own. Your Taiwan project and Chim↑Pom’s Hiroshima piece, these were both held in public spaces. Are there others? 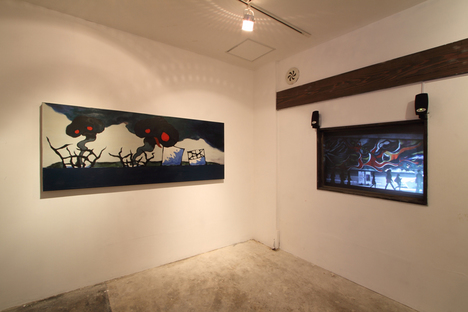 Inaoka: The piece called “Level 7 feat. Myth of Tomorrow” is a project created immediately after the nuclear power accident when nobody could do anything, amid an atmosphere of “if you’re going to create artwork, help out clearing the rubble first.” Of course, I had similar feelings, but the good thing about being in a group is that there is something Chim↑Pom can do that transcends the individual. We decided that we had to hit the metal while it was hot, so to speak, to do what we could at that moment. What we decided was that we would not harm Taro Okamoto’s piece in any way. Okamoto’s piece “Myth of Tomorrow” deals with a very deep theme, but people who pass it completely ignore it. Without anyone acknowledging it, it has become a backdrop to the urban landscape of Shibuya. There are no other pieces that address such an important issues, on that scale and we thought we could try something from a similar perspective as that of Okamoto.

Sakuta: Can you talk about your experience exhibiting something, but having it taken down? Chim↑Pom held “Enduring the Unendurable and Suffering What Is Insufferable” by collecting all of its problematic pieces. Mr. Okamoto, can you talk about “BATTAmon”? 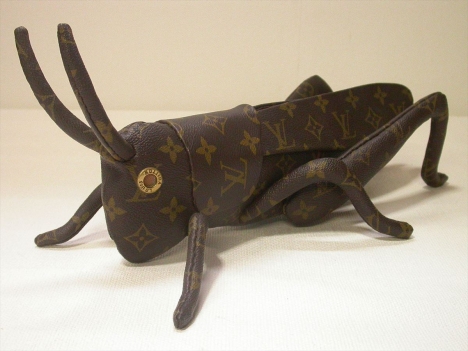 Okamoto: First, I created the name “BATTAmon” using both katakana and hiragana writing, to make it cute the way “Doraemon (Japanese manga character)” is written. That became commonly used and it was soon on Wikipedia, and I thought, “hey, that’s my intellectual property.”

After exhibiting the piece “BATTAmon” at the Kobe Fashion Museum, I received an Email from company LV. Apparently, they are so vigilant that they are often called the “fashion police.” According to their letter, I was a “self-proclaimed artist” and they would sue me if I didn’t reply in a week. It’s like they were my teacher. Also, if they were interpreting “BATTAmon” as a fake object, I thought there was a mistranslation or a misunderstanding there. “BATTAmon” does not include any element of fakeness. But still, I was shaken by the letter. I’m an individual, so if the company sued me, I knew I could end up bankrupt, so I consulted Mr. Sakuta. He introduced me to a lawyer, but already, someone had walked into the museum’s curators’ office and gotten hold of the exhibition catalog. Afterwards, I got a chance to exhibit at the Kyoto Arts Center, so I exhibited “BATTAmon” together with “Motogram (moto = original).” LV has admitted to borrowing Japanese family crests for the LV monogram.

Company LV has taken down my “BATTAmon” piece by force, but out of the hundreds of insects, they have created their own grasshopper. They most likely wanted to expunge the grasshopper image of my piece, but they should have made something better; I thought their take on my piece was an egregious regression. Obviously, I included an image of the LV company’s grasshopper in my exhibition.

Sakuta: Mr. Okamoto, you were not only an artist in this exhibition, but you were also a co-curator.

Okamoto: I had predicted that I’d receive complaints. I had prepared a black box (to cover the exhibited work) to respond to such reactions.

Sakuta: But there were other works that had nothing to do with company LV, but someone came to the museum and took the catalog. “BATTAmon” was used as the main visual image for all the exhibition flyers, posters, and the website, so after this incident, the main image had to be removed (extracted), everything had to be reprinted and remade. I thought it very strange the way they wanted to “pretend that it never happened.” Afterwards, Mr. Okamoto carried out the exhibition at his own private space.

Okamoto: I thought I’d gather all the pieces that company LV had a problem with, and I found that there were a lot of them. LV carries this image that they support the arts, but it’s difficult to see where their criteria lie. They support artists like Takashi Murakami and Richard Prince who use appropriation, but why not me?

Sakuta: It’s still unclear who or what kind of power dynamics was behind the removal in that exhibition. With so much unexplained, we’re left with the impression that the exhibition was violently removed. Has Chim↑Pom had similar experiences?