Yuri Suzuki, a designer and a sound artist who seeks to relate sound and human in design, received Swarovski Designers of the Future Award in January 2016. The award is given to the artists and their activities that cross over many fields technically and ideologically and lead the era. Suzuki is an artist who seeks ways to express media, which nowadays became into a database and lost its substance all over the world, in visible shapes such as designs and objects. With dyslexia, Suzuki creates artworks focusing on vision and hearing that enables audiences to become creators or players of sound. Also, not only creating artwork, he organizes workshops with kids and art performances with people who have difficulties with vision. In 2015, he had a booth with will.i.am at Digital Revolution held at Barbican Centre in England. I was able to hold an interview with Suzuki who often does collaboration works with various creators. 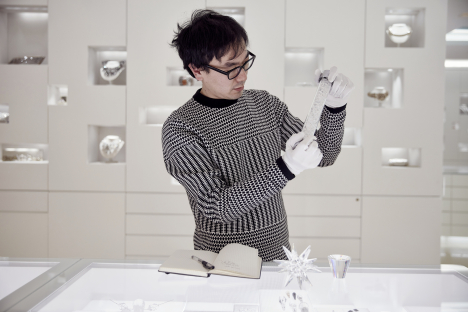 Congratulation to the Swarovski Designers of the Future Award that you received. How do you feel about it?

Thanks for the kind words. Considering that I do sound design, I am surprised but also happy about receiving the award that is usually given to people who do product, architecture and jewel designs. I enjoy working in various areas, but this provides me an opportunity to work in a new area.

You live in the UK. What’s the reason you decided to live outside of Japan?

I have been supporting Mr. Tosa as one of the assistants of Japanese art unit, Maywa Denki, since I was at college. Through the support, I came across with an opportunity to visit Selfridges, a high end department store in London, to set up a performance. Since then, I started to communicate with graduates from Royal College of Art (RCA), ABAKE, Anthony Dunne and Crispin Jones. This made me feel that I wanted to study at RCA, so I did and graduated. 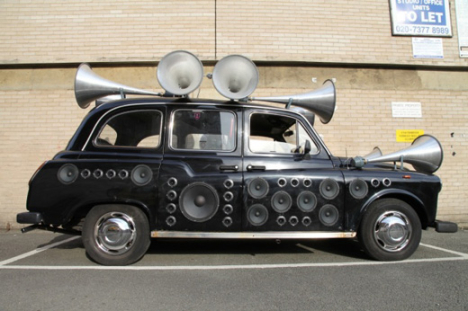 Your artwork “Sound Taxi” has 67 speakers on the side of the taxi. What is the concept of this work?

This started from a Danish headphone company, AiAiAi, asked me if I could make a machine to transform city noise into wonderful sound. This machine has a large number of speakers and high quality microphone attached onto a London cab. The noise of big cities goes into microphones, gets transformed into music with its own algorithm which shoot out from the speakers.

I’d like to ask you about “Garden of Russolo” which provides a big impression of kids’ fun face in a recorded video. What made you come up with this idea? Did you initially have kid’s smiles as an idea?

This work started as a commissioned work with V&A museum in London. Since the museum is a quiet place, I thought that sound will ring more sensitivity than it would in other places. Then, we did this installation for the reason of us wanting to hear the sound that we create in a different environment. A horn bell attached onto a box inspired by a futuristic musician, Luigi Russolo, musically transforms sound which comes into the bell.

I also wanted to create a sound playground. I wasn’t originally thinking whether if kids will have fun with it. But usually, things that I like are good for kids. So I assume that my work naturally provided the environment where kids can have fun.