There were two little girls in white dress holding hands walking around whispering into each others’ ear, casually dragging their long hair which conjoined at the bottom scraping the floor as if this is perfectly normal – a recreation of a poetic performance piece called Siamese Hair Twins (1987) by the Brazilian artist Tunga. 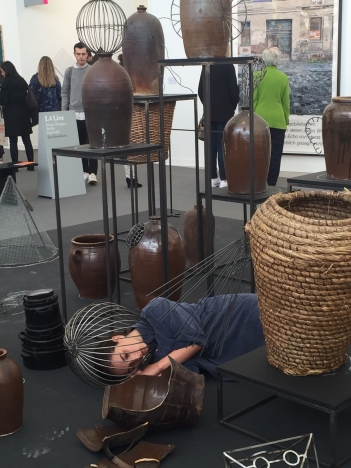 Another captivating piece was at Meyer Riegger, performance piece by the Czech artist Eva Kotatkova called Collection of Suppressed Voices (2015), the title said it all, a silent dancer weaving through broken vases with a cage on her head. It was just like A Doll’s House by Ibsen, quietly engaging. 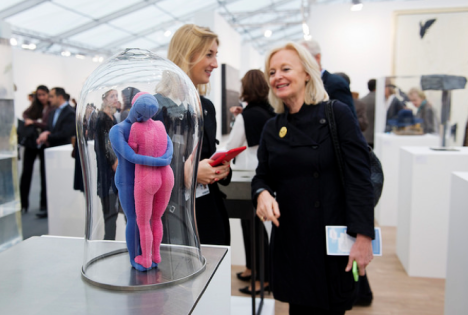 164 galleries from 27 countries were represented under this big tent, each of them putting forward their strongest, most exciting and desirable works on show; a giant shiny colourful pumpkin by Yayoi Kusama (PUMPKIN 2015) at David Zwirner, Hauser & Wirth cleverly gave all small sculpture a plinth treatment, works by Phyllida Barlow, Louis Bourgeois, Martin Creed, Subodh Gupta, Mary Heilmann, Richard Jackson, Djordje Ozbolt, and Takesada Matsutani and all. It was one of the most effective presentation and much admired. 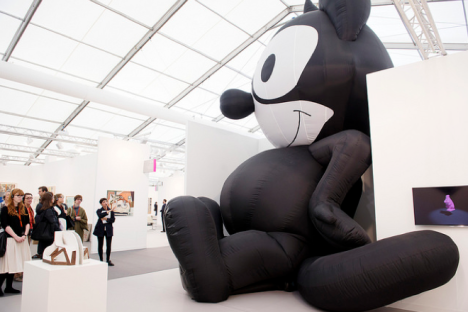 Also impossible to miss was a monstrous inflatable of Felix the Cat by Mark Leckey at Daniel Buchholz. Paintings were there in more measured way, Carl Freedman showed exquisite works by Ivan Seal. Sculpture and pastel colour were on the trend, making it whole as a gentler fair.

Focus section with younger and emerging galleries including 47 Canal. At Simon Preston with works by Amie Siegel‘s installation showed a great promise, at Castillo/Corrales neatly bonded books proved that artists are indeed thinking, and the American Rachel Rose (winner of the 2015 Frieze Artist Award) created a little refuge connecting the outside mother nature inside by way of sound and light installation, Gaia theory (we are one with the universe) was strong in people’s subconscious, it worked.

Also amusing was a room with school boys and girls sitting around, these children were there to engage whoever comes in with a conversation about God, life, future…etc, heavy stuff. This is a work by Asad Raza, performative interaction with visitors is a practice famed by Tino Sehgal felt at home here.