The Old Hugo Hotel on 6th street in San Francisco has been abandoned since 1988 but can still be found in the area South of Market (SOMA). If you walk around this street, you will find an unusual scene of old furniture like cracked bathtubs and broken stand lights sticking out from the windows. These were supposed to be used in the hotel. You may smile because they look like they are greeting you.

A developer tried revamping this old hotel 20 years ago, however, funds ran out and all the work stopped. The walls and ceiling were demolished, furniture was left broken and shredded parts of bathtubs and toilets were spread all over the place. It became like a ghost house. Over the years, squatters have added graffiti and other signs of transient stays.

Sculptor Brian Goggin, video artist Ruth Eckland, painter Maxine Solomon, and photographer Mel Solomon found out about this building and started a new art project. The Old Hugo Hotel is going to be reborn as a new facility; it will have affordable and low income rental units in the near future. Commemorating this change, the ArtHaus gallery which is located at SOMA as well has introduced a multi-media installation show by all 4 artists. Time, air, people…You may be able to feel the story of the Old Hugo Hotel. 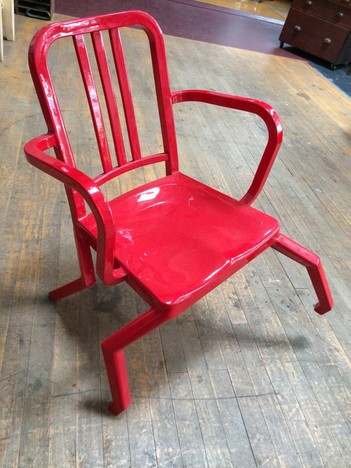 The installation shows the furniture defenestrated from the building by Brian Goggin. He is a sculptor / installation artist who continues to leave his mark on the West Coast with his whimsical and vibrant layering of found objects and chaos- provoking sculptures. This installation was created with the help of over 100 volunteers using the furniture that still remained. It may express the history that nobody could cope with the ghost house or the furniture, and would rather run away from the building rather than work on its renovation. You can see the actual chairs which have bent legs hanging on the wall at the gallery. They look almost like they are falling down to the ground. 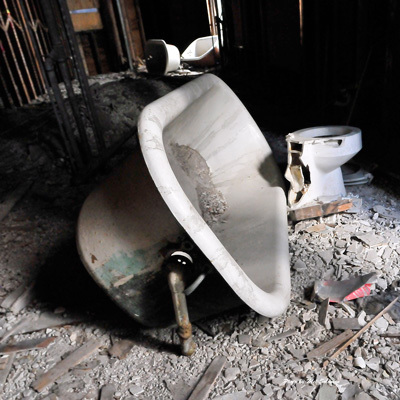 Photos by Mel Solomon show the view of the inside of the hotel as well as the outside. 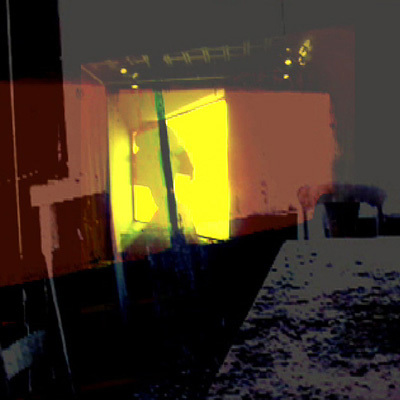 A video installation by Ruth Eckland is set at the entrance of the exhibition space. Piece of images have been edited together and the silhouettes of pigeons, people, and colored lights appear and disappear. Even though nobody is talking, with its rhythm, you may feel a tone as if somebody is narrating about his or her memory. 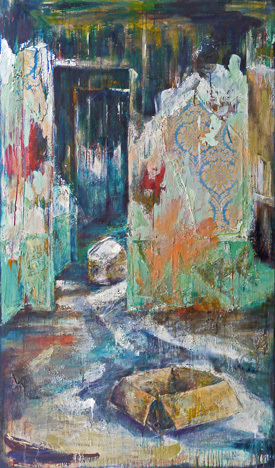 Maxine Solomon painted a collage using actual wall paper and walls. For years, whenever she passed the Old Hugo Hotel, she thought about creating paintings of the interior of the iconic structure, immortalizing its fascinating history and documenting those who had passed through its doors. There is a work in which she used a poem on the wall. It was originally written upside-down and so she didn’t realize that it was a poem at first, however, she realized what it was after looking at the wall carefully.

“Behold the fear in all men’s eyes, as the bomb called Kaos falls from the clear blue skye Some will hide but my friends all will DIE”

The smell and the temperature of the building which you can’t feel from outside will be transmitted to you through these paintings.

A building reflects the transition of the city, people, and era. You will have experience of a historical page memorized by San Francisco.