There is nothing more than the Berlin Royal Palace to symbolize present day Berlin. The angry waves of time have monkeyed around with The Royal Palace, which was present during many events in Berlin, and was then lost. Currently, plans to rebuild it have been developed, bringing it to the forefront of history again. The palace will be rebuilt at the center of Berlin, where it’s foundation once stood. Along with the Berlin Cathedral and Museum Island, the Royal Palace will fulfill its role as the face of Berlin in the future. In this sense, the Berlin Royal Palace carries an important meaning, but also it has a close connection with art world. This is because the rebuilt Palace will contain an art facility called the Humboldt Forum. 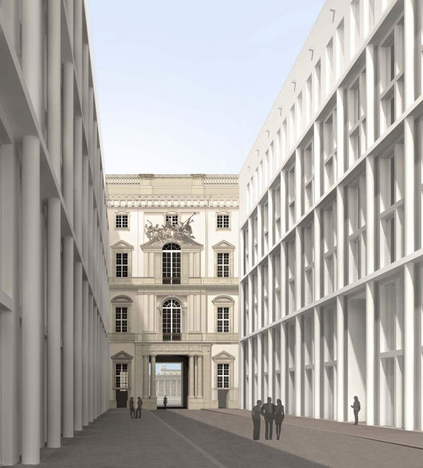 The Berlin Royal Palace could also be thought of as Berlin’s history. It was the center of Germany and also the Palace of the German Emperor. During World War 2, Berlin was burnt to the ground along with other German cities, and the Royal Palace was heavily damaged by bombing. After the war, The Royal Palace, located in East German territory, was caught in the war of ideology and destroyed by the East German government who hated its relationship with the past. The Republic Palace, a symbol of East Germany, was built on the same site, though it no longer exists either. It was removed and left unused after German reunification. What was left of this historical site was a mere empty lot. The Royal Palace has been trying to return to this place where many historical events have piled up. 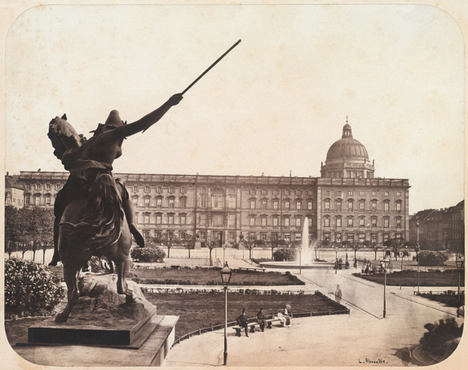 View from the Altes Museum to the Stadtschloss through Lustgarten, 1890; Photo: bpk / Leopold Ahrendts

Although the reconstruction of historical buildings would usually be viewed as nostalgia for the past, the Humboldt Forum to be built inside of the new palace will have a different meaning, as it will be shared by various local organizations, such as the Folk Museum, Asian Art Museum, Humboldt University and Berlin Central Library. In other words, this place will play various roles as an introduction world culture and Asian art, a place for study and research, and a repository of knowledge. Therefore, the values of contemporary society will be reflected in the reconstruction of the Royal Palace. At the same time, by hosting many foreigners, the Palace will present a Berlin where various cultures mix. This will be the Humboldt Forum. 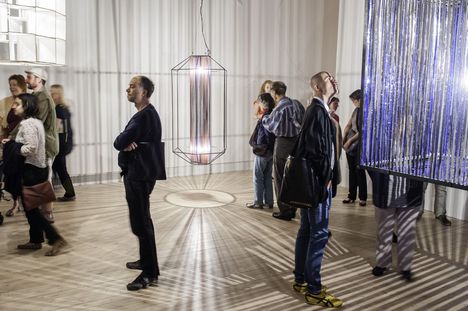 Momentum leading to the construction of the Humboldt Forum is already visible. Dahlem, a suburb of Berlin where the Folk Museum and Asian Art Museum share a building, has started a preparation campaign called “Humboldt Lab Dahlem.” Until the completion of the Royal Palace, the sites in Dahlem will hold trial exhibits and events. The planning started in the spring of 2013, gathering artists, designers, architects, curators and researchers. Currently, an exhibit called “Spiel der Throne” (Game of Thrones) is being held in Dahlem, exhibiting Chinese culture along with the theme of the Chinese throne. 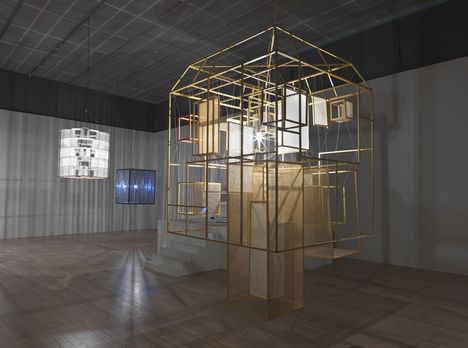 The showpieces for “Spiel der Throne” are gathered in one room inside of the building. All of the art was made specifically for the exhibit, including no items from either the Folk Museum or the Asian Art Museum. In the corner of the room, a beautiful space spreads out colored with light and darkness, decorated with lights of various shapes by one of the exhibition artists, Kirstine Roepstorff. One piece of her light art includes forms superimposed repeatedly over many lights to create beautiful shadows on the wall and ceiling. A subtle and profound world is created in the exhibition room, but the pieces not only display beauty, they also convey the social role of lighting in China. By handling the meaning of light in the area of social events, such as death and birth, the piece offers a glimpse into the beauty of this aspect of culture. There, traditional Chinese culture was demonstrated through a modern interpretation. 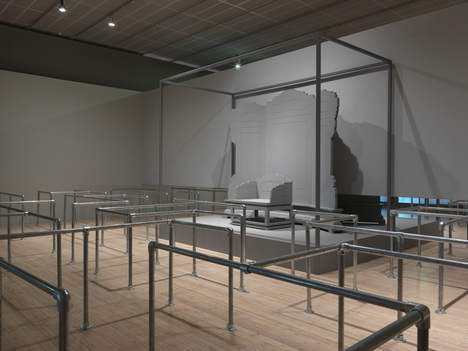 As you walk through the exhibition, the Chinese Throne Room will appear. You might get the illusion of being lost in an exhibit hall at the Asian Art Museum, but something is a little off. There are unnecessary amounts of handrails attached to the front of the throne. Konstantin Grcic is the designer who created this strange piece. The countless handrails both form a maze preventing people from easily approaching the throne and also control people’s movement. This not only represents the relationship between the viewer and the object on display, but also the relationship between a sovereign power and the public, as those in power are protected and the others are left confused. The throne is the symbol of management and control. Of course, it implies a criticism of the centralized politics that persist. It could be said that this piece was a reminder of this Chinese characteristic from a European perspective. 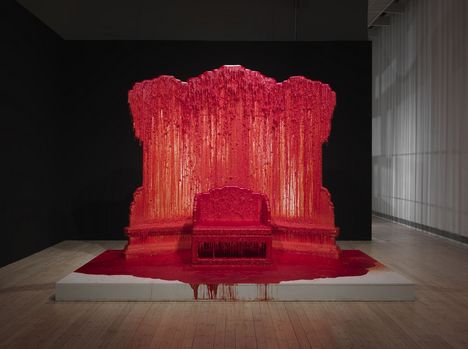 The deflection of perspectives is occasionally seen at an exhibit like this which introduces different cultures, and in some cases, the exhibit might only convey exoticism. Yet the Humboldt Forum should not cause any such worries. Chinese artist, Zhao Zhao, conveys a perspective from inside China and a multidirectional perspective at the exhibit. He created a throne covered with red paraffin wax, which gives the appearance of being inundated with bright red splashes of blood, and reveals a violent, powerful force. Additionally, a monitor is set up next to the piece allowing one to go online and read others’ reactions toward Zhao’s art. Currently, China censors public comments online and freedom of speech is restricted. Therefore, the artist prepared a web page freely accessible from China and created a free field for his own work. The authority that represses freedom can be felt strongly here. The viewer will be impressed with the magnitude of the problem in which China currently finds itself. 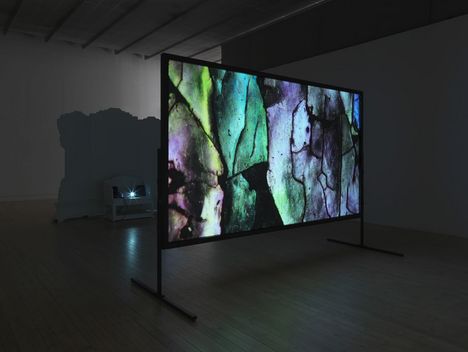 The various perspectives created by seeing one culture from inside and outside allow the viewer to realize that there are different possibilities that they may have never noticed before. Artist Simon Starling displayed his video work showing the details of a throne to remind people of the possibilities produced by various perspectives. The video images highlight details as in an investigation, displaying a fine expression of the throne that can’t be caught with the naked eye. Although the surface shows scenes of exotic stories and landscapes, the video captures the timeless and beautiful geometric patterns on the mother-of-pearl work. The artist finds the potential carried by the throne without getting fooled by its surface appearance, making it visible with an unusual perspective. By reminding people about what is necessary to be familiar with the foreign and different cultures, the video work was appropriate for the Humboldt Forum. 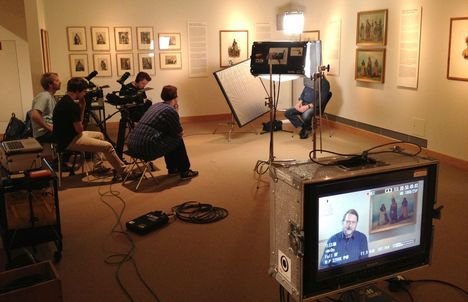 A concept behind the Humboldt Forum is to have it exist as a door to other cultures through cultural introduction and criticism, cross-cultural perspectives and calm observation, revealing and foreseeing the shape of projects to come at the Royal Palace. Of course, the destination of the door applies to other areas as well as China. North America and India, among other areas and cultures will soon be introduced. The reconstructed Royal Palace aims to understand international culture and will become a destination to experience. The neighborhood in Berlin where the Royal Palace will be rebuilt is home to various kinds of people. When a wall separated East and West Germany, many people from Communist Vietnam moved to East Germany while many Turkish moved to West Germany to satisfy big demands for labor. Now the collection of states in the European Union attracts countless foreigners to the central city of Berlin. It has become a town overflowing with a diverse, multinational people. The mixture of cultures that occurs everyday will be a topic that cannot be avoided when speaking of Berlin’s future. Germany and Berlin will have to face this reality of understanding and accepting the diverse cultures that have filled the city, as they are involved in the national project of reconstructing the Royal Palace.