This year I would like to dedicate this article to Sonar itself instead of the artists, line-ups and the crowd.
Because Sonar have being working hard for 20th years to keep Barcelona in the center of attention of music culture worldwide and have gave the city the opportunity to witness the most interesting and influential artists, music scenes, movements and trends in electronic music through the years. 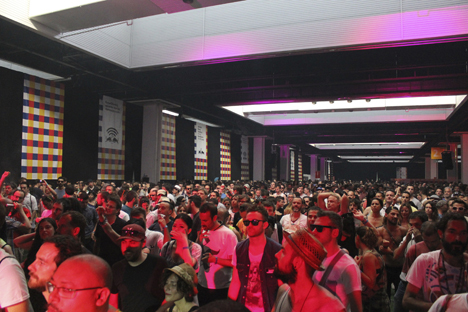 This is not a job that requires and non-stop sense of investigation and passion an also a bit of faith. Of course we all have to understand that this is also a business and in this world if we don’t compete and understand the system it would be game over soon! This means that everything cannot be as risky and advanced as some of us wanted Sonar to be, but I think there is room for everything and the and we have to understand some part of the line-up are made for sell tickets. 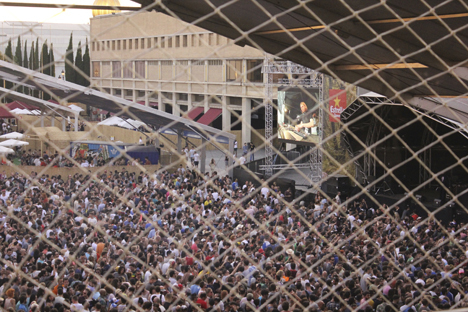 This year Sonar celebrated their 20th anniversary! And they did it with a record of assistance with more than 121.000 people.
The Festival gave us all a birthday gift: Sonar had changed their already emblematic location at CCCB and MACBA right at the city center to relocate in a bigger space installation in Plaza Espanya at La Fira Montjuic.
For us who have attended the festival for so many years the decision of changing the Sonar by Day venue was taken with a bit of scepticism, but once there on Thursday, we felt more comfortable than we ever did before.
Sonar has increased the space considerable. Sonar Village the emblematic outdoor main stage have keep his green grass and have win so much space and really have become like a Village with the Professional Area in the middle, a big space for food, and the village have 3 roof areas that help the audience in front of the main stage with the heat. 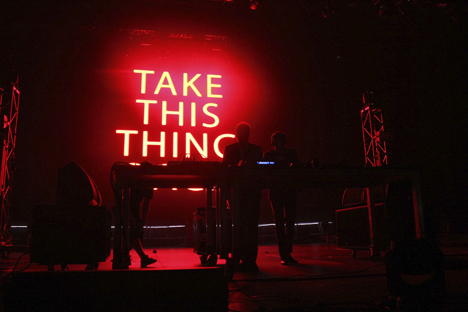 Everything is well connected at the Montjuic Fira, the stages are communicated in a few steps, there is enough space for rest and listen to the music. Is really enjoyable the experience between the indoor-outdoor from the Village stage to the SonarDome and SonarHall. 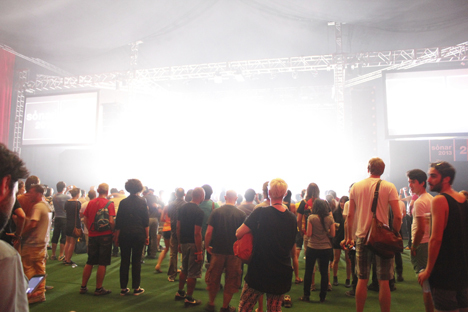 In all of them, the work for press photographers have being highly improved with bigger pits spaces, wardrobe and a comfortable pressroom. I particularly congratulate the sharp, professional and friendly work of the Sonar Press team that gets better every year and make our work lots easier. 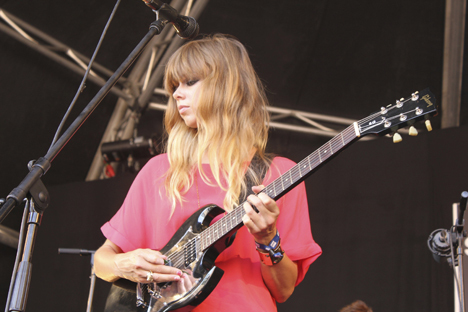 Sonar by Day. Sonar Village this year held up remarkable presentations, and also the photographers pit was bigger and rally comfortable.
On Thursday we enjoyed Gold Panda and the eccentric French artist Sebastian Tellier and the remarkable performance by Lindstrøm & Todd Terje.
Friday the Village presented the Sísý Ey from Iceland with their soft House music with some pop flavor.
Foreign Beggars with their hip hop and electronic music mix.
Jamie Lidell with his freak funk style.
On Saturday Fatima Al Qadiri mixed Hip hop, grime and funk on her Dj Set and it was great the fresh Live show by Chromatics. 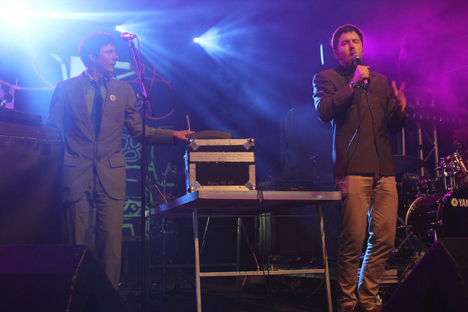 Sonar Dome is the stage curated by RedBull Music Academy is probably the most important stage on Sonar by Day and the one with better line-Up by far.The RBMA is well known for the excellent work they have being doing the last years and the bit amount of artist they have hosted on stage and they always offer a handful of highlights for every Sonar. This year the highlights came with the shows by JESSE and Jimi Tenor, Oddissee, Elektro Guzzi, Felix Kubin & James Pants, JJ Doom. 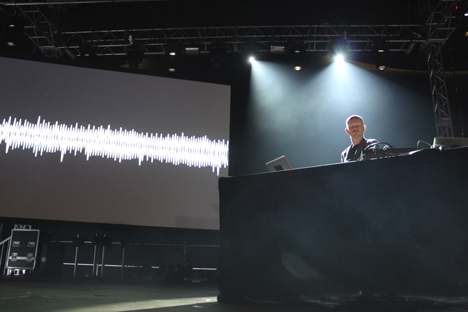 Sonar Hall. This stage is the reflection of the Sonar improvement on their new location at the Montjuic Fira. The new Sonar hall is a gorgeous space. This, in my opinion is the most interesting stage of the whole Festival, and it is important that Sonar gave a big stage for present the most experimental proposals. If we are talking rally about an “Advanced Music Festival” we need to have shows by the most cutting edge performers and experimental music nowadays and present them with the same importance than the famous Djs on the SonarVillage.
This Stage is always an Oasis, and this year was rally powerful with the shows by Evol, Mykki Blanco, CHRISTEENE, Atom TM, Jackson and His Computer Band, Vatican Shadow. 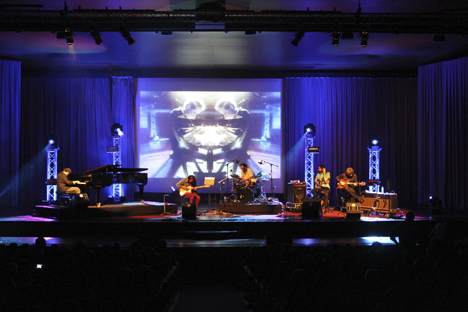 We take a look to the SonarComplex which is the new Auditorium that Sonar by Day have at the Montjuic Fira. This space is a different experience, very comfortable and a good place to enjoy more intimate shows like the ones by Pascal Comelade + Richard Pinhas or the performance by visual artist Dinos Chapman. 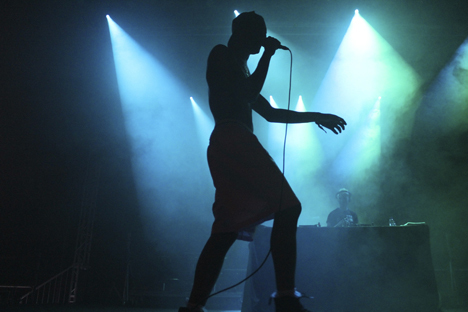 This was the Sonar by Day, I think is the start of a new era for Sonar, with this space that suit the festival and improve it. 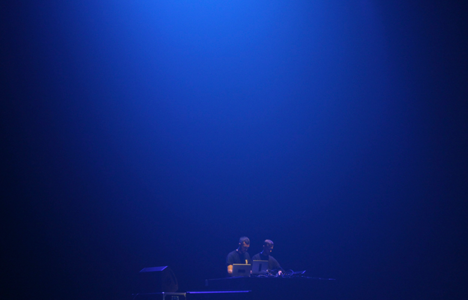 Sonar by Night. Now if you are going to Sonar by Night you don’t have to cross the whole city and run for the earliest shows because La Fira Montjuic is much more closer to the Night Venue.
This year we started early in Friday for the most important show of this 20th year Celebration with the pioneers Kraftwerk presenting their incredible 3D show.
We didn’t want to miss the show by Raime, so we were early to enjoy their performance at the SonarClub. Raime displayed an intense and dark atmosphere that shook the building. 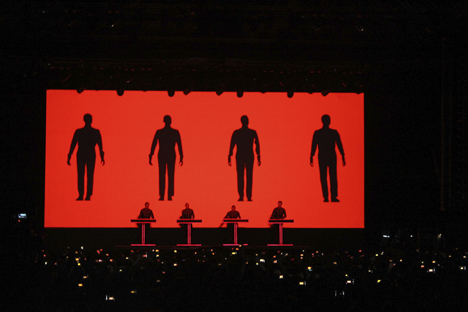 Kraftwerk showed to everyone that they still far away from everyone in this business, the show was impeccable, elegant with so much care of sound. The show goes trough all their hits and anthems. This was really a gift. 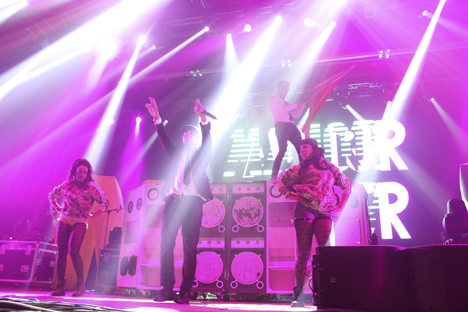 The same night we saw the elegance of Krafwerk, later on at the same stage we got another show that was the complete opposite to the German legends. Raw & dirty but exciting and powerful was the presentation by Major Lazer. The band from Mad Decent took the Stage and bring it up-side down with their nasty and catchy beats mixing Electro, Reggae, Salsa and Latin beats… this show was incredible, total out of control party! 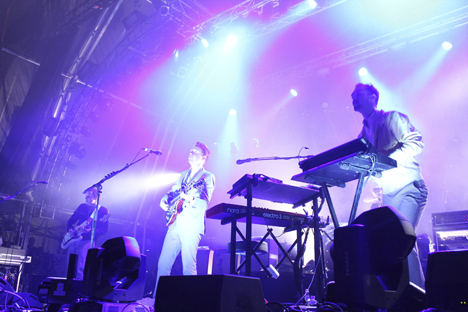 It might seemed a bit risky to bring an indie band to Sonar by Night where everyone is dancing with the beats of Dj´s but the band Two Door Cinema Club jumped to the stage well supported by lots of fans singing their songs and filled the front row. 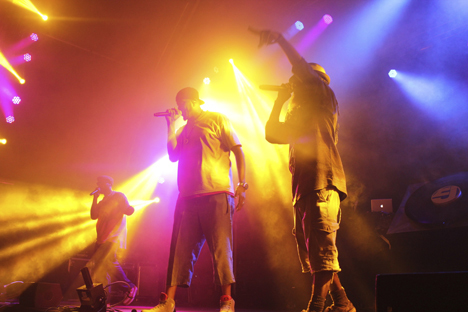 To develop an advanced music festival you have to understand about music roots and Sonar knows about this. This year was the time for the old school hip hop at their best with Jurassic 5. 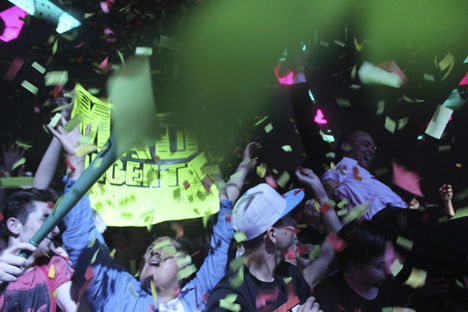 With people dancing and having a blast we saw 2Manydjs doing what they know best and that was the perfect time to end up our time in this 20th year celebration of Sonar.

A year to remember… congratulations Sonar!