Berluti
Since 1895, Berluti has been developing their special savoir-faire, creating timelessly elegant, exceptional shoes. Since 2005, the house has been venturing into new areas with its artistic director Alessandro Sartori, first with leather goods and now with ready-to-wear. A selection of key pieces for Spring-Summer 2013 will be available in pre-release at colette from January 14 to 26.

colette ski club
colette, Franklin & Marshall and Black Crows are keeping the ski club tradition alive, offering the perfect capsule collection for before or après-ski. From riding the ski lift in a sweater and hat, to sitting by the fireplace, après-ski, in jogging pants and a sweatshirt. Exclusively at colette. Rendez-vous at the Black Weekend festival from March 7 to 10, for music and crazy skiing at all altitudes, for every attitude.

The Seafarer
From Farah Fawcett to Jane Birkin and Jacqueline Bisset, flared jeans from the American label The Seafarer single handedly represented the style of the 70s. Created in the early 20th century for Navy sailors, these bell bottom jeans were designed to be easily rolled-up when boarding a ship. Today the brand is back in the spotlight with a 3-part video for their spring-summer 2013 collection, directed by Garance Doré. Exclusively at colette from January 21st ! 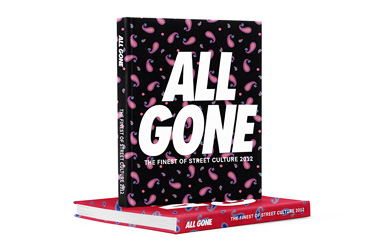 All Gone 2012
All Gone, the seminal street culture work published by La MJC, now has a whole new chapter. For the seventh consecutive year, All Gone has compiled nearly 200 products which represent the highlights of the 2012 year. An essential item that’s as collectible as the products to which it pays homage, All Gone 2012 comes in a limited edition of 2,000 copies, available in two colors. Both covers have a unique print, specially created by Ill-Studio. The La MJC team will be at colette for a signing on Saturday, January 19 from 5 pm to 6:30 pm.

PVNVME
Daily Paper headwear is a label from Amsterdam that was founded in 2011, specializing in designing contemporary caps that place as much importance on quality as attention to fine detail. After the DVSMKO for Amsterdam, now it’s time for the PVNVME for Paris. Exclusively at colette.