Peace can be realized even without order. 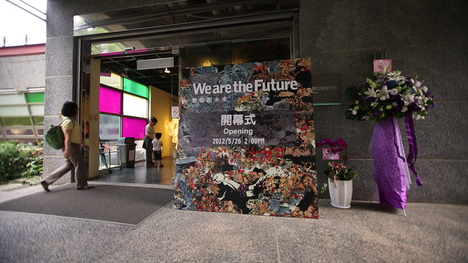 Held at the National Taiwan Museum of Fine Arts in Taichung, the second biggest city in Taiwan, ‘We are the Future’ is a general exhibit that lets artwork by the teamLab ‘Ultra Technology Strike Group’ and commercial works live together.

There were more than twenty works on display at the exhibit including ‘Flower and Corpse Glitch,’ an animation scroll which consisted of twelve films. Included are ‘One Hundred Years Sea – Running time: 100 years’ whose scale seems to span one hundred years; ‘teamLab Hanger,’ an interactive experience displaying different images when a hanger is picked up off of a clothing rack; and ‘Sword Dance and Shadowgraph,’ a projection mapping video that was made to complement Taichi Saotome’s performance.

‘Peace can be realized even without order,’ the latest work specifically made for this exhibit, stood out conspicuously inside of the dim exhibit area, even alongside many other video works. Hundreds of smartphones were displayed in a dark, each with a tiny figure singing or playing an instrument, as if part of a Japanese festival, all while communicating with each other. These small people do not establish communication across the whole group, instead interacting with those nearby, resulting in a massive group interaction.

‘Peace can be realized even without order’, teamLab, 2012. Interactive Animation Installation, Smartphones, Sound: Hideaki Takahashi, Voice: Yutaka Fukuoka, With the Cooperation of HTC

teamLab’s work used to be one large print from a video, but it is an aggregate of small displays this time.

For example, the scenery is large in ‘Flower and Corpse Glitch,’ which displayed at the Louvre, but pictured within are the stories of many small characters. I have realized that it is more effective to have many small displays with one character on each than it is to have one big display and put many characters on it in order to develop a story. The space becomes more abstract by placing innumerable characters in the dark, and the each smartphone pops out as if they were a sculpture of a picture. The idea of being able to create an imaginary world with only characters is like feeling you might have had as a kid trying to create your own world by setting up ‘Kinnikuman Erasers’ in your room. 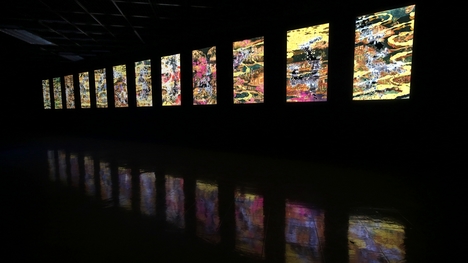 The characters in this piece react to the audience and perform on their instruments especially well in response to each other’s actions.

There are some messages in this work, but a theme of ‘beauty of unbalanced things that are not restrained’ is one of them. The old Japanese knew the beauty of incomplete things, such as the stone garden of Ryoan-ji and the shape of the stone at Zen-ji. They pick up a lump of the distorted energy in nature. The same idea applies to bonsai since they become a microcosm filled with life in a small container. Asian design seems to unleash energy while European design is made up of many restraints. 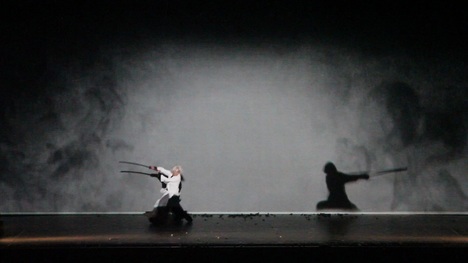 What kind of design are you particularly talking about?

For example, if it’s a Western garden, it would be made symmetrically, or restrained in a way like cutting trees. The Japanese garden lets people pick up and place things anywhere, including any little cluster of natural energy that people might feel. Of course, it still continues these days. Western fashion magazines have such simple layouts while Japanese fashion magazines like ‘Koakuma AGEHA.’ are essentially doing the opposite, using confusing layouts which overflow with Asian-like energy. Western countries developed a culture that believes ‘being balanced is comfortable’ and Japan developed the idea of ‘the beauty in unbalanced things.’

Is this same energy shown in the arrangement of the smartphones in the dark?

Each individual, overflowing with energy, was placed without restrictions and this might be able to create one view of the world. These small people on the smartphones created a life and became free. It’s like the liberated people at festivals exist in innumerable smartphones. They will communicate with each other and could be in a festival-like mood if they do well.

Can you tell me the process how you created this work in detail?

This exhibit is a retrospective show, but I wanted to include a new work as well. So I looked into HTC, a Taiwanese mobile maker. I contacted them about four weeks prior to the exhibit, and two days later I was told that they were able to get hold of the necessary amount of smartphones that I would need. Since this was a very sudden project, an engineer from HTC flew all the way to Haneda from Taipei to bring six terminals. An engineer from teamLab also went to Haneda and discussed technical issues with him there on the spot.

They also love both technology and art, so they were cool with helping us. The music was done by Hideaki Takahashi who teamLab has worked with often. The base of the music is the footsteps of the small people, since each smartphone plays music and that creates the harmony. Each smartphones starts stepping along with the footsteps of others nearby and this is the base of the music. The small people have flutes, small and large drums, and biwas. They also sing, and the voices were done by Yutaka Fukuoka, who sings the opening theme song for the TV program ‘News Station.’ Takahashi completely understood our concept for this work, and we even laughed when we heard his rough draft music the first time since it was already perfect. Minoru Terao, visual director at teamLab, directed the animation. The animation team, which includes Atsushi Ito, made the dance moves with CG based on Awa folk dances. Tetsuro Kato from the computer vision team set up the movement recognition for actual people, then Sakashita, an engineer at teamLab set up the small people’ movement to be interactive based on that information. There were so many problems when they actually installed the smartphones at the exhibit area, including overheating, the smartphones couldn’t handle continuous operation over long periods of time, and there were problems with the power supplies, so the work wasn’t in perfect working order when the exhibit opened. Therefore, Sakashita was still in Taiwan (as of July 3rd) troubleshooting the problems. Things to be running more smoothly since the beginning of July. 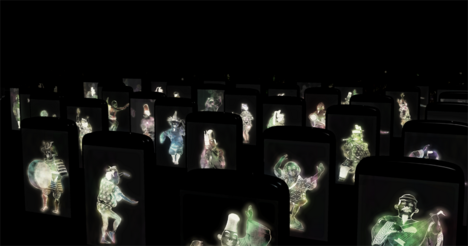 Why did you choose smartphones?

If you think of a camera as eyes, a microphone as ears, a speaker as a mouth, and a display as a face, smartphones are like people who can express themselves. While we were working on this project, we noticed why Google’s smartphone is called the ‘Android.’ They are a man-made intelligence known as an android, the closest creatures to human beings. They are wireless and can communicate almost like human beings do and perceive the outside world. They can express themselves with a display and a speaker. They network with each other in a very human way.

It’s not just one PC controlling all of the smartphones in this project, but it’s a situation where each one seriously communicates each other, isn’t it?

Due to the limited number of connections possible with Wi-Fi, they can only communicate with those nearby. Therefore, the information transmits like ripples from phone to phones. The Internet is the same thing since they go through servers or routers that are nearby. The Internet society seems more like the Asian style than the Western style since there is almost no rule in the structure of the Internet. There is no center. The rules are minimal, but society is maintained society. This project could resemble that idea.

That could be the state of the internet when you impose half-baked Western concepts. The Western concept sees ‘peace’ as the rule of law, the expulsion of strange things, and the use of power to maintain control. In this respect, I think that the old Asia was different. For example, when I go do the Awa Folk dance in my hometown, Tokushima, I don’t see any orders there, and even the music gets made up of rhythms which someone started and others hopped on. This is how the festival is made.

Is it a close to the idea of free Jazz?

I don’t know much about Jazz but I feel like this is more selfish than Jazz. It seems like people play sounds that go well with others when they play Jazz. However, people don’t care about others when they dance Awa folk. Since everyone is getting excited, I should be able to get excited as well. The idea is abstract and selfish like this.

Are there rules like a core melody or BPM in Awa Folk dance?

There is a brief pattern of rhythm but absolutely no melody, so everyone will be surprised when they actually experience the festival. Everyone communicates in their way and creates the atmosphere of “I should be excited since everyone is.”

So this work reflects the experience of the Awa Folk dance?

I got drunk and babbled in the middle of the Awa Folk dance, “Look, peace can be realized even without order. Western society is making a mistake,” but it made an impression on the people who were with me. I even forgot about what I had said at the time, but anyway, the Awa Folk dance is a completely disorderly situation and a peaceful space. It’s very rare that fighting happens during the Awa Folk dance. Everyone gets drunk and dances wildly. “Although there are no rules, peace is still there.” When I realized that that was the case, it became the base of this work. I realized it later, but teamLab is also a pretty ideal example of being able to create a distributed network in an organization.

What type of distributed network has been used at teamLab?

In the case of this private exhibit in Taiwan, this was completed without any single person understanding the entire situation. After the exhibit was confirmed, it took us only two months to finish displaying about twenty pieces. Thanks to mobile phones and the internet, unbelievable progress was made possible. For example, each time various different people would come out to the window at the museum. Since no one was in charge of this exhibit full time, the museum staff was pretty confused. But they eventually got used to the distributed network of the teamLab (laugh).

Usually, if we want to do animation work, we set up a couple of PCs before the screen and project the image or run the program. But, smartphones are the ultimate standalone objects that can communicate and show expression. Instead of having a computer in the middle, this work has smartphones communicate individually. Since the communication is exchanged between independent smartphones, there are moments that everyone is in an excited mood or in silence. I understood that smartphones can create a society like humans due to the sensitivity of sensing and communication between phones. This work hints at the idea of a new network society through the Awa Folk dance. I will always believe that there are hints for the future from the old days and non-20th century Western societies.