Right after Stockholm Fashion Week, a strong start off for Copenhagen Fashion Week with an intense schedule including Danish talents but also other designers from Scandinavia. As a matter of fact, Copenhagen Fashion Week works as a hub for the Scandinavian-driven designers. This is the most important fair for buyers. More than 60,000 this time; also there were 47 catwalks split in five fairs. The largest Fashion fair is Gallery int.; It had more than three hundred brands and presented over thirteen designer shows. In other words, this is the second biggest trade show city in the world after Paris. For this edition, we wanted to highlight the new collections from Henrik Vibskov and Stine Goya. Other meritorious designers were Gaia, Soulland, which introduced their bigger collection to date, Jean/Phillip and Anne Sofie Madsen On this edition, we missed the presence of one of our favorite local brands, Wood Wood, which we hope to give an update for next season. Also, another of our favorite Danish designers, the London-based designer Peter Jensen, who did a small happening at Gallery, together with Absolut Vodka. Regarding the non-Danish designers, this year’s attention went to Helsinki-based designers R/H. 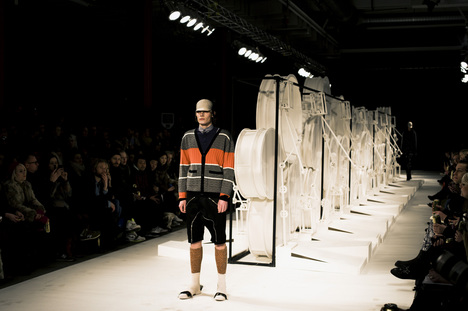 Henrik Vibskov is, most likely, the most representative Danish fashion designer. His shows always are a combination of installation and catwalk; “The Shrink Wrap Spectacular” was an interactive musical chaos provided by a massive drum machine, where the models stepped on tangents linked to big drums. Drum-shapes are the base of the new collection: jackets with drum-like silhouettes on the back, instrument shaped pattern pieces that are sewn into various pieces. The randomness of sound reflected the disturbed knit patterns, which resulted in a space dyed knit, big zippers on jackets and pants that allowed the clothes to change their silhouette. This season he used a lot of white in stark contrast to the chaotic colorful detailing of the knits and patters. Heavy wool, merino, viscose, silk and cotton as well as high quality perforated matt leather. 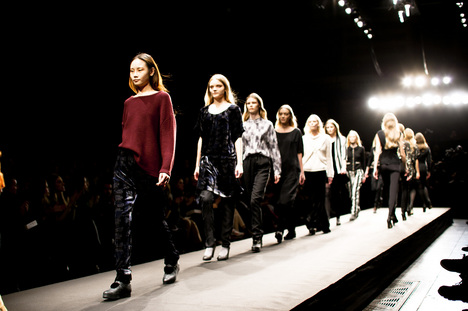 Stine Goya introduced her collection at the city hall with characteristic prints and beautifully composed colors in dark tones, light pastels and sophisticated gold embroideries that merge into an elegant, seductive unison. `Seduction De La Nature´ is her AW12 Collection and it is inspired in The Garden Of Eden. A big golden apple was visible at the runaway as the entrance to backstage for models passing to and fro. Using prints, colors, styles and unique features, Stine Goya has created an elegant, feminine, harmonious and seductive universe. The jackets are iconic and are a distinctive signature for the collection. As a new feature, she introduced garments in organic textures that melt into exclusive, raw and elegant styles. 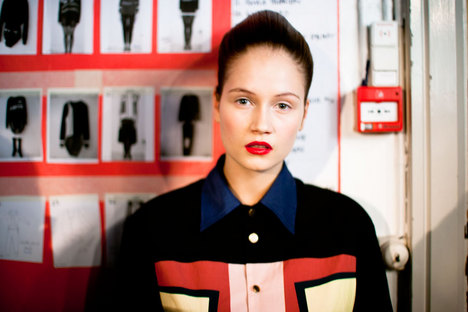 Gaia Brandt graduated on Fashion Design with Knitwear at Central Saint Martins College in London in 2009. The collections are handmade and mainly consist of one-off pieces and a smaller number of styles. Simple silhouettes contrast with quirky details and an appealing treatment of color make up Gaia´s unmistakable look. Gaia show was a nice surprise. We were hosted at a mystic old Church in central Copenhagen. The show was wrapped in ecclesiastical organ sounds, though it was nice idea, it should be mixed with other tones as the show advanced. She introduced an enigmatic and poetic picture of the world where we live in. A visual inspiration from the Russian Constructivism, put together with references to skiing outfits from the 1930s-40s, as a part of the avant-garde movement. The collection was geometric and experimental. A range of sport-like vintage uniforms that someone could relate to our retro futuristic outfits from 70’s and 80’s spaceship classic TV series such Star Trek, Battlestar Galactica or V. 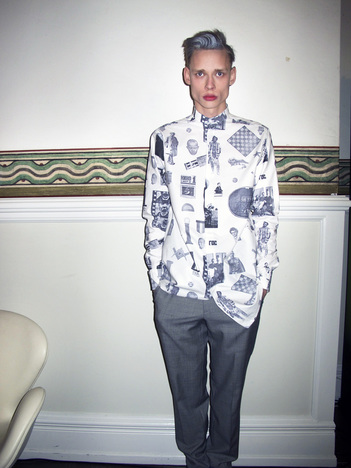 Soulland is in a magnificent moment. The menswear brand commanded by Silas Adler has been steadily on the rise since 2002. “Imperial” is the AW12 collection; it was presented in a crowded City Hall. I’m tempted to say this collection means a breakthrough for the brand. Means, Soulland’s philosophy condensed in a wider and new solid collection. A step further, it carries on the good job on jackets in thick wool, prints on shirts, hoods and the overall Scandinavian-driven design with that sober-sophisticated touch of the brand. 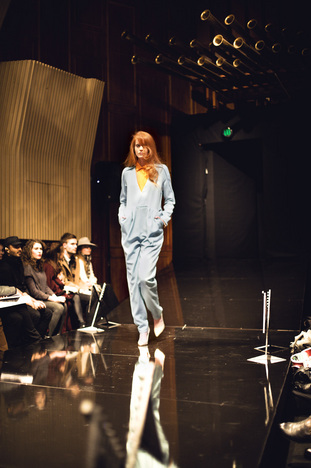 Three more noteworthy mentions are, Wackerhaus, Jean/Phillip and Anne-Sofie Madsen. Wackerhaus is a Danish womenswear brand, which left a good impression for both quality garments and a nice range of pastel tones within the palette. Jean/Phillip presented a raw collection in their tone’s palette. Melancholy concept of sharp slim silhouettes combined with voluminous capes trapped with a great sense of underplayed details. Anne-Sofie introduced a simplistic collection inspired in native tribes with off-whites and classic materials. Chains made of bone, rope and leather straps on dresses, knits and jackets, plainer shirts, men’s pants and sweatshirts. The color palette was stick pretty much to this range of off-whites, black and the incursion of earthy tones.