In 2007 they charted at #63 Billboard, due to a student called Nick Halley, who used the song “Music Is My Hot Hot Sex” for a home made iPod commercial published in YouTube, which Apple executives decided to remake for broadcast. Now the Brazilian quintet strike back. CSS (Cansei de Ser Sexy) have achieved a certain mature that still keeps the band´s identity. CSS returns with “La Liberación”, a Spanish title for their third studio album. Its release will be next August 21st and available digitally everywhere on 29th. We got the chance to talk to them right before playing at Fuji Rock Festival in Tokyo. 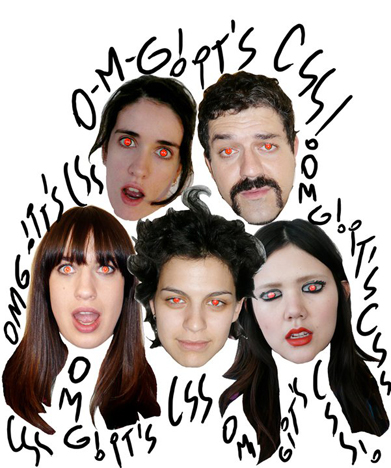 It’s something Lovefoxxx suggested and we never had a discussion about it, it just made total sense to us but it wasn’t so conceptual, like most things we do, it just felt right. This album is a lot about being free and happy and empowered and Spanish is a language that is very similar to Portuguese but it’s also very different. It’s def a language that brings a lot of passion and I guess the album also talks about passioned moment in life, when you feel so good to be alive and to make your things and etc. 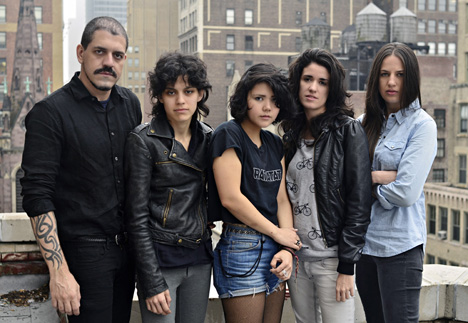 Why you decided to sing in Spanish?

It’s just “La Liberación“. We were in Chile and the name of the record had already been decided and we met this band in a festival that Adriano use to hear a lot in the 90s, called “El Otro Yo” and I guess something clicked in his head so he did the song and it’s our version of those kind of band’s music. Also Spanish is a very cool language, I guess for us it will always be easier and more fun to play around with other languages than Portuguese, not because we are against Portuguese, but Portuguese is so poetic and serious, it is very hard to write popular music in Portuguese and feel honest about it. We didn’t grow up listening to Brazilian popular music – I mean, we love it now, but it wasn’t love at first sight– and coming from São Paulo you can literally grow up listening to anything in the world. We are also going through what we call our “Spanish phase” because in the record that are also Spanish guitars and a song that’s been inspired by one of Almodovar’s movies “Volver”. Every big pop artist goes trough a Spanish phase. We are not those but we think we are… like Madonna on “La Isla Bonita“.

Ha, ha, right. Well, tell me about Bobbie Gillespie, what he did on the new record?

He did vocals for the song “Hit’s Me Like a Rock”. We’ve known Primal Scream since 2004 or 05 from festivals everywhere and they’re really nice people and we love their music. We’ve been meeting ever since and in 2008 Lovefoxxx did vocals on their record “Beautiful Future” so it was natural to ask him to make vocals and he accepted it and made it in London and sent it over. All the collaborations on the record happened via internet. 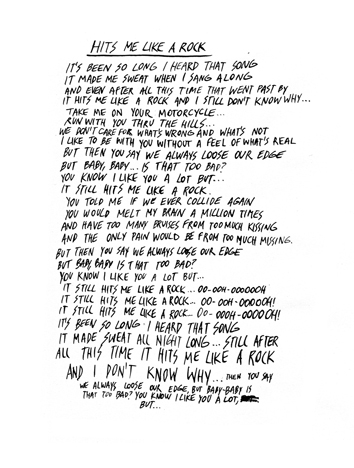 In this new record, could be right to say it is more open to other influences and genres?

Yeah. I think for us is always pop. I think the word “Pop” nowadays has the worse connotation ever but when we say pop we mean songs that you wanna listen to over and over and that are structured with that classic thing Chorus-verse-verse-chorus-verse bridge chorus or something like that. We love pop music, we love all kinds of music apart from like “Glee” and some other shit but I think the melting pot aspect comes right from the beginning of the band and in that sense this album is more connected to the first album that was more all over the place –and that’s how we are anyways– but in terms of mature sounding I guess it’s more connected to the second even to “Donkey” is a very live sounding record. It’s a new phase and hopefully people will see some sort of evolution or transformation that still keeps our identity.

Has Adriano produced this new record? 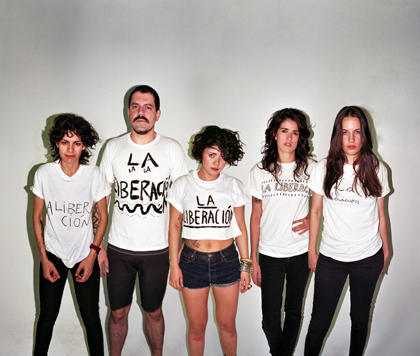 How is being the Fuji Rock experience in Tokyo?

WE ARE HERE NOW! We are about to play. It’s rainy now but people are coming and coming with their boots and rain coats and we are VERY excited to play in a bigger stage in a great spot on the festival. Will tell you more after the gig !!![…] It was probably one of our best shows ever if not the best!!! So amazing.

Wow, there are so many great things about Japan. I guess we love how excited and passionate Japanese people can be but respectful at the same time, it’s a very unique mix that makes Japanese people. They are very relentless but in a very delicate manner. I think working here is amazing, people work so hard and then you see the results: everything has care and has beauty. It’s a very special place for us, very close to our hearts. Japan is really a place that has challenges and is able to get up from the floor and rebuild everything. It’s very inspiring. Also we grew up in São Paulo, and that’s the biggest Japanese colony you can find so we feel connected right from the start. We also love the food, the baked goods, the fashion, the stores, art and how cute they are and wise, all at once. Japan teaches the beauty of tradition and the beauty to try new things and to be open minded at the same time. 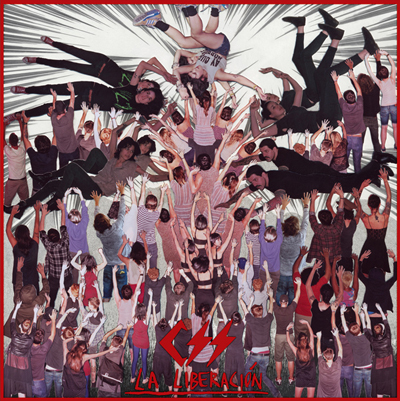 You gonna be touring in Europe from late August and September. What do you enjoy around there?

We all love Europe. We all lived in Europe for a while, it is really a great market for music, maybe the best, I don’t know. Europe is the only place that people can go and be intellectuals and nothing else. And there is this sort of refinement and you can be so eccentric. I also I think the winter sometimes is very harsh but that produces amazing music and art. I love how unique every country is, telling everyone their cheese and wine are better or having so much pride and the countries are so close to each other and so different! Brazil is so big is like the size of Europe. I think Europe is a beautiful, beautiful, mix I think playing music might be the thing we enjoy the most there. We would have to go country by country to say what we enjoy the most but I guess the history of art and of western civilization and a big center for thought. 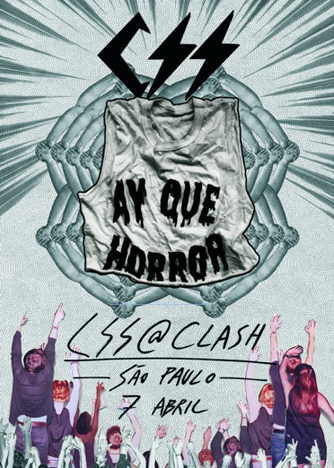 “Let´s make love and listen to Death From Above” was one of your first hits on the dancefloor. Please tell me the story: why “Death from Above” and what they told you about it?

I guess they were pleased. We only ever talked to Sebastian, he come to our first Toronto show and he was very nice. At the time Lovefoxxx was listening to them all the time and she wanted them to Google themselves and find this song. I guess it worked!

You all have secret talent for other disciplines into art, graphic design or fashion design. Have you done lately anything you could highlight or is it pretty much all about music nowadays?

No, Lovefoxxx just did this super cool small poetry/drawings zine and she also did design for some t-shirts, along with our merch. she also contributes for some websites I wish I could remember the names but those are cool websites! Ha,ha,ha,ha God, how bad I am. We all like to dj too. Sometimes together and sometimes apart. Lovefoxxx totally djs all the time when we have free time. I’ve been kind of lazy about my photography stuff but from time to time I col-lab with some magazines and I try to show my photo work. I had work published on Apartamento Mag, Vice etc.

Are you all based in Sao Paulo? Tell me about that city!

Luiza is not based in Sp. She spends some time in Europe now but she always go back to Sp. The rest of the band is based there. Adriano has a room in London, where he likes and Luiza spent most of the last 3 years in NYC and before the other band mates were based in London and then two of them spent some time in Berlin. Sp is a very crazy city, we can’t really explain it in simple words but if you grow up there you can probably handle any city in the world and if you like it you will never be able to live in a very small city because you have been used to a massive one. Even N.Y feels very small and easy for me compared. At the same time that is so massive, grey and intense, it’s Brazil! And Brazil will always have that warm cozy friendly vibe, no matter where. So the food is amazing and I honestly think it is such a special kind of people. In Brazil, somehow –taking out the social major injustices and violence and stress of SP– is always fun. When you’re not super stressed on traffic etc. Parties there don’t need anything to be fun, like in America. I find that people often need a theme or some kind of game to keep parties fun and in Brazil you just call up some friends and it’s already the most fun party ever. The art is really good. I love at least 100 Brazilian artists right now but for me it feels like a very old-fashion art structure of galleries run by older people, the same people and then maybe some street art ones but there isn’t really a in-between scene that is self supported, that goes for music too, there are small scenes like hardcore, reggae or something but they’re very small and doing things in a kind of a traditional manner, I think, maybe I’m wrong and I’m not exploring enough, it’s just that in Brazil to make things from scratch and see them growing is a huge challenge and can be super frustrating, specially if you’re not making sort of regional music or art.

I guess everyone in the band would like to be rich, not like super rich and to be powerful and sit on a million dollars, but just like to be able to buy all the things in the world and just travel first class and just so whatever because it’s just fun, but we were broke together for so long and we were happy anyways so I guess that doesn’t define us but what I’m trying to say is that we are very mundane, we love to eat. I think food is one of our major major vices, and drinking. I’m the one that drinks the less and Adriano stopped drinking but we spend a lot of money and time on that. We love it too, we don’t think it’s a bad thing. You have to live by the fullest -without “needing” things.