This edition of Sonar that have show us that the Festival is a established event and that their long time experience is a plus that have being earned trough the years.

Because us as press and for the audience in general the unveil of Sònar line-up is one of the most exciting moments. So early months Sónar drop some names, ad some new shows, artist, activities and so on. But this year this exciting moment wasn´t as GREAT as usual. Sónar didn’t response to the fact their are the advanced music festival bringing the latest, weirdest, and experimental proposal in music we always get.
Instead the big names were artist that have already perform at Sónar two years ago or at least recently in early editions: Underwold, M.I.A, The Human League, Buraka Som Sistema… of course there were room for new proposals and cutting edge artist but a little less than we expected.

But the great fact about this introduction is that Sónar was packed, and at the end of the festival more than 88.000 people attended this Edition. That is a great success and it show that Sónar is an event so solid that people related to having a good time and exciting musical experience. Bravo for Sònar !!! 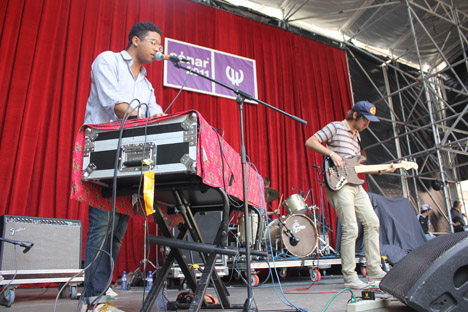 So lets start with the Festival on Thursday Sónar by Day at the big open air Sonar Village with the performance by the band Toro Y Moi (US) lead by Chaz Bundick, presenting their celebrated second album “Underneath The Pine” and their Chillwave and black sound from Funk to Disco and R&B. 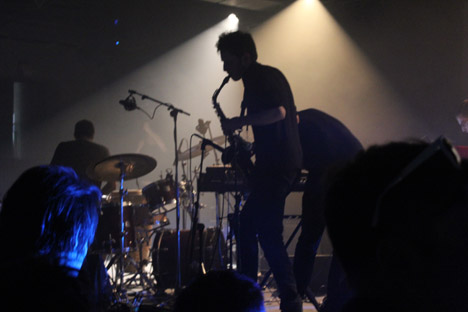 Later on at a Sonar Hall packed we watch the live show from NIcolas Jaar and his organic electronic dance music performed with a live band (drums, saxophone, synth…) really elegant and sharp presentation. 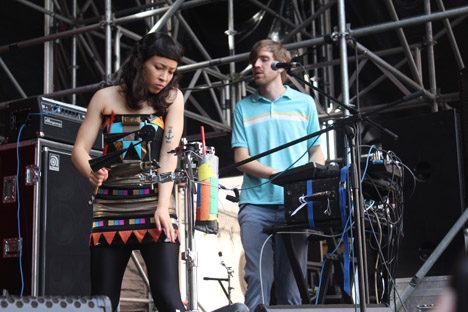 Outside at the Village the Swedish vibrations from Little Dragon with Yukimi Nagano sensual vocals and a band in shape at drums, synth and bass, start making the people dance and this will not stop for the rest of the Festival. 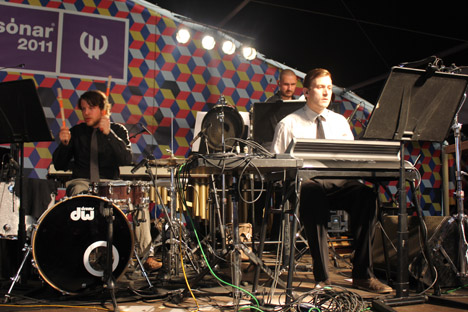 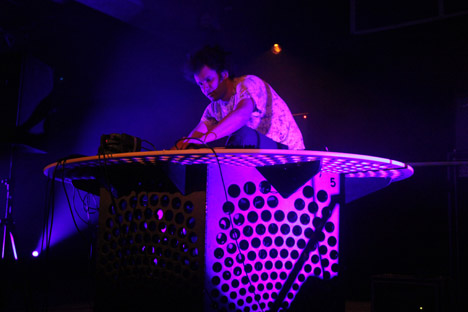 Back to the Hall the solo show from Tyondai Braxton (former Battles). Tyondai have something special in his blood; he is the son of avant-garde composer Anthony Braxton. For his solo presentation at Sónar, he experimented with some vocals and keyboard sounds passed trough Fx pedals and loops to create a orchestral music experience from concrete, minimal sounds to epic.

After this show it was time to move from Sónar by Day to L´ Auditori for the Sónar Opening Night. Its difficult to make a review about this show. I think wen Sonar announced this show a few months ago it was like a light in the dark, something unique !!! 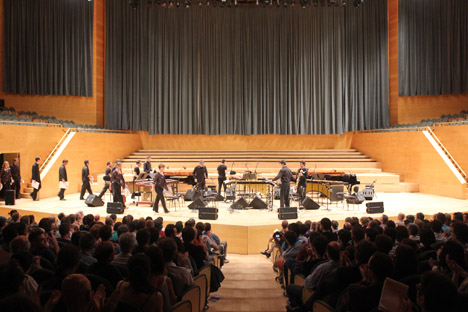 Steve Reich is maybe the most important avant garde composer alive and one of the most influential musician for the 20th Century. But Mr. Steve Reich have cancelled his appearance at Sónar due to health issues.

The program of the night “Sextet” and “Music for 18 Musicians” make it a unique experience. Well the composer couldn’t be there but with the heartbroken many people show up at L´Auditori and the reward was that the performers bcn216 + Synergy Vocals have just nailed the pieces with a fantastic performance that was magical. 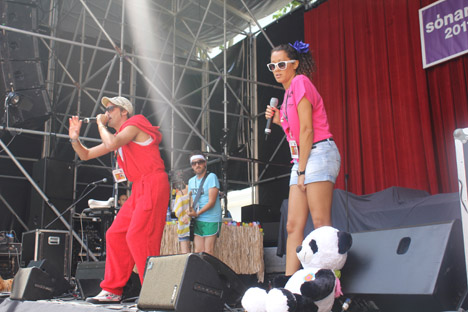 Friday at Sonar by Day started with Facto y los Amigos del Norte from Spain, with their joyful mix that included some hip- hop with reggaeton and funk music. 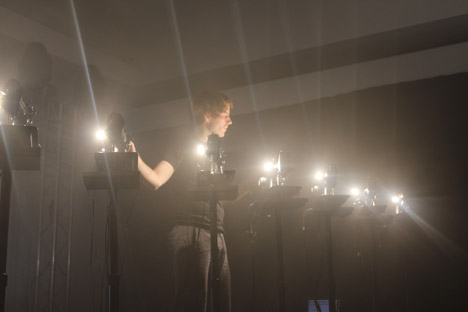 The Sonar Colmplex is the stage dedicated to the most experimental scene performances and the live show from the Sewing Machine Orchestra was one of the proposals followed by the intense and foggy experience of witch house from oOoOO, the show from the US two piece band was one of the best of the day and right after the atmosphere continue with How To Dress Well (US) with his incredible falsettos and pop sound. 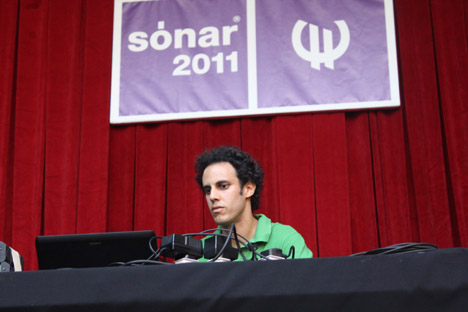 Atmosphere (US) took the Village stage with their old school rap, sharp lyrics and deep beats. Kieran Hebden aka Four Tet aka Four Tet (UK) was the next to jump to the Village and the one who bring the beats that people was waiting to start the party with his fine electronic sounds. 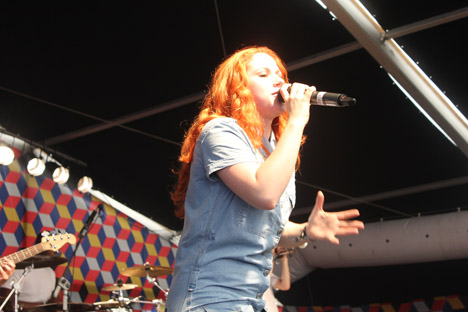 The Dome was taken by Katy B one of the most uprising young artist from the UK and she show up why everyone is talking about her. Katy have a delicate voice and angelical looks that are mixed with garage, funky beats that makes a really good match. 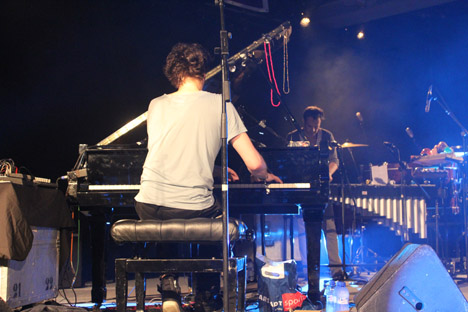 Down at the Sonar Hall we got to watch an exquisite performance by the German band Hauschka, taking inusual sounds from a prepared piano (like J. Cage) Volker Bertelmann together with the percussionist Kai Angermann created an incredible atmosphere and sound landscapes in a elegant show. 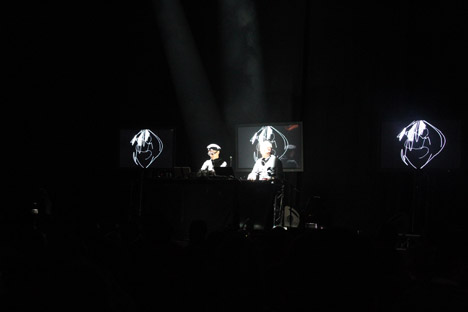 So its time for Sonar by NIght were the big boys performs for an audience ready to party.
The first show at the big SonarClub its wasn’t so much for dance but the experience to watch together to heavyweights of image and audiovisuals like Alva Noto (DE) and Ryoji Ikeda (JP). 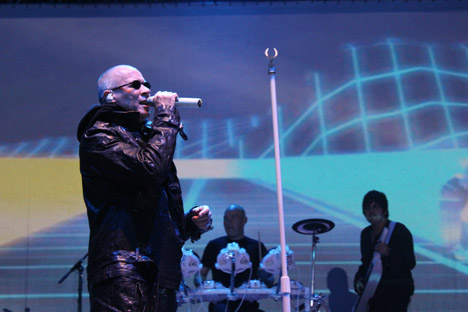 First of the headliners The Human League, the british electro pop band have presented a show full of classics and reminders of the synth electro pop directly from the 80´s that still fresh today. 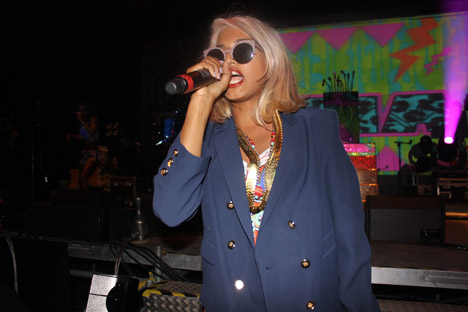 One of the biggest and most expected presentations of this year festival was the show of M.I.A The show was delayed for more than half an hour and the audience was about to explode when Maya showed up like a hurricane at crowded Sonar Club. The show started powerful with the artist jumping into the crowd and making the people dance to well know songs from Maya rainbow arsenal. 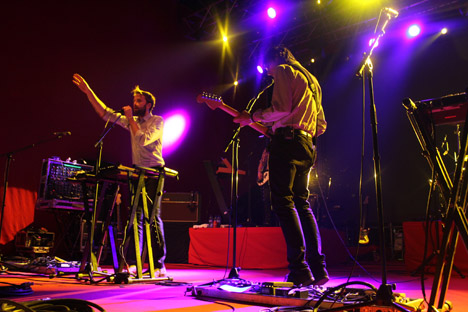 At SonarLab and directly from Australia the band Cut Copy with their addictive retro-pop, synth and sharp guitars captivated the audience. 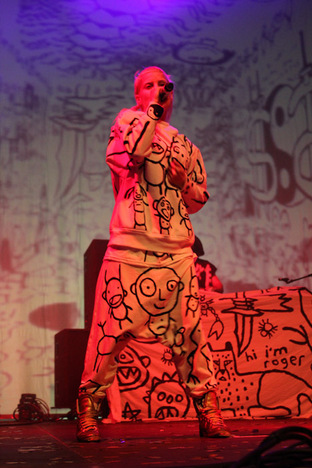 The SonarPub was pump with the energetic dj set from the L.A start Dj. Dj. Steve Aoki.. The set was a perfect warm up for the best show of Sónar 2011 by the freak, trash trio from South Africa Die Antwoord. The show was a blast, furious, nasty and raw, with explicit lyrics, crazy visuals and with the strong hip-hop style they called ZEF performed by Yo-Landi Vi$$er and Ninja with the tunes of Dj Hi-Tek. Brilliant show! 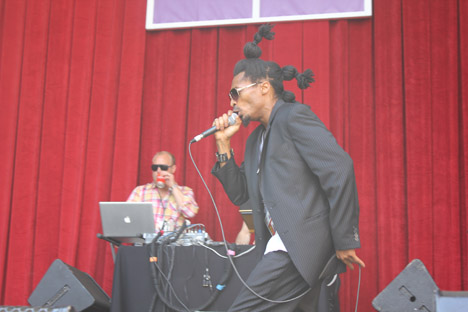 Saturday at Sonar dy Day started at the Village with the live show of No Surrender (US) with their storng mix of rock, hip hop and electro punk. 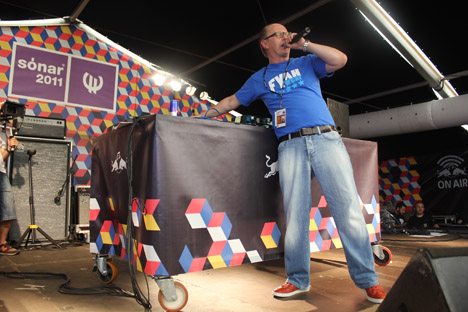 The SonarDome surprise us with the Dj set by the British David Rodigan. I must say that i have never see someone DJing with so much passion and enjoying the music than Mr. Rodigan. He presented legends of Dubstep and reggae and stopped the sound to talk about what he was playing, something like and MC but mixing, singing and dancing at the same time. Unique! 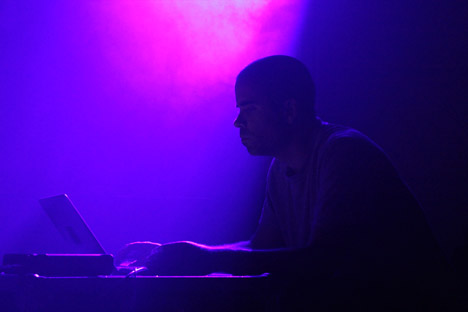 At the SonarComplex it was great to listen the show of one of the local alchemist of sound and experimentation EVOL led by Roc Jiménez de Cisneros. Evol presented a show with rave sounds, noise, basslines and his horns “computer music for hooligans” as he describes. 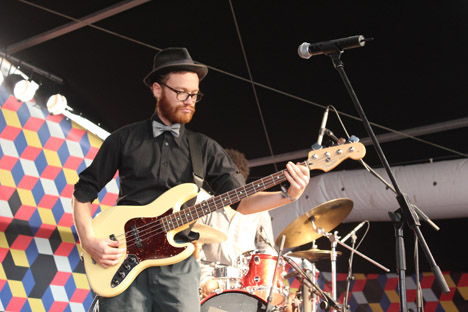 From New Zealand the band Electric Wire Hustle Hustle presented their deep soul and funky style at the SonarDome in a trio of Synth, Drums and Guitar surrounded by hypnotic vocals and soft beats. 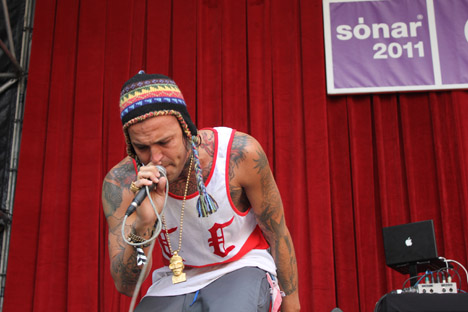 The raw hip-hop from the streets of Alabama come by the hand of Yelawolf powerful speed lyrics, deep beats from dub top classic rock. 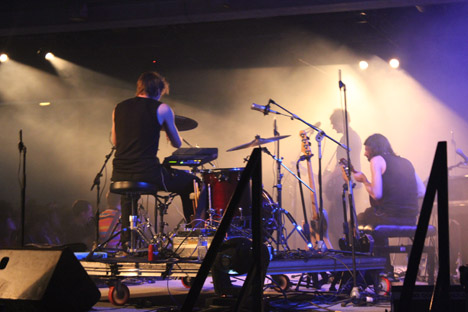 Down at the Sonar Hall the people packed the space for two big shows . The first one by the German dubstep and techno makers Apparat Band with Marco Haas leading a powerful band. The second was the exquisite show of the British Actress. The live show of Darren Cunningham is so accurate and rhythms so powerful that is quite a experience to see Actress live. 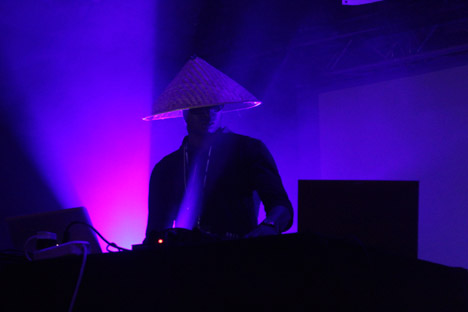 The show of the day was about to happen at the Sonar Village. Directly from South Africa, the streets of Soweto Shangaan Electro was so contagious that hypnotized the people and the Sonar by Day became a big dancehall and a colorful party. The african rhythms over 180BPM directed by DJ Spoko on the mix, the lyrics and most of all the performance of the GREAT Tshetsha Boys masked dancers was incredible. This was the perfect ending for Sonar by Day!! 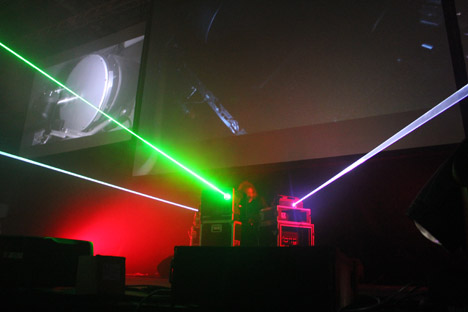 The last night of this Sonar started with the visual terror of visual artist Chris Cunningham (UK). This show was something some people didn’t expect when they go to dance and party at Sonar by Night and that was the magical thing about it. The dark atmosphere and nightmares images make some people leave to another stage form some dance beats, but the people to follow the whole show of Cunningham got delighted by this incredible artist. 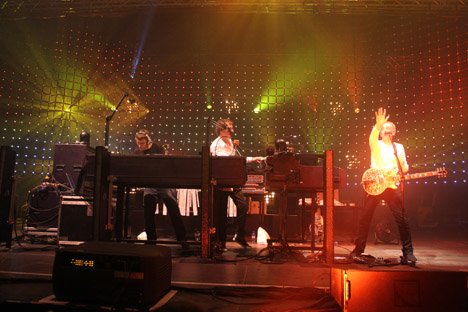 The British cult duo Underworld were unstoppable at SonarClub. Karl Hyde and Ricky Smith were so enthusiastic and energetic as if it was the first show they played. And the please the people with they megahits “Cowgirl”, “Rez” and “Pearl´s Girl” a big arsenal of classics sounded really fresh and joyful for the audience. 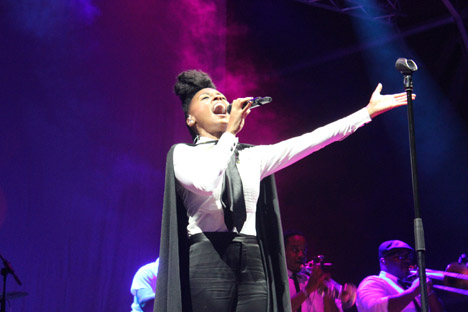 The new young start of funk-pop and R&B the little diva Janelle Monáe (US) came to the SonarPub with a show that unfortunately she presented not far ago here in Barcelona. A theatrical show with the artist joined by a big band, incredible outfits, fantastic video images and with Janelle dancing and showing the power of her voice, the young start seems to be ready to became the next BIG woman on the pop, r&b and soul industry. 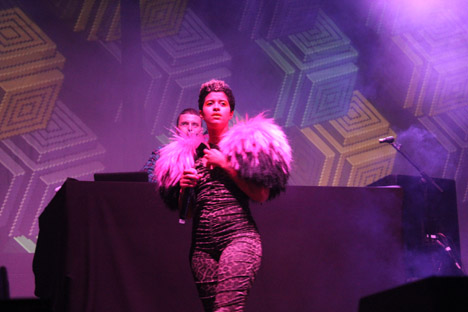 The party was already on the top, with thousand of people moving from stage to stage at the huge Sonar by Night and the last show to review was happening at the Sonar Pub with the crew of Buraka Som Sistema an their Kuduro Angolan sound. This dancefloor killers have the secret formula to bring the people crazy and shake their bodies with their music. 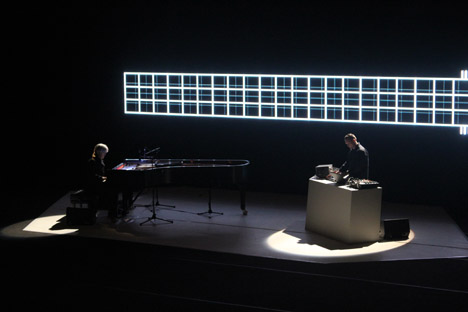 After attending a great Edition of Sónar once again, three intense days of fun, dance, discoveries, friendship and music at his best Sonar gave us a gift with the Sonar by Night at the magic and unique Grec Theatre for the show of the two figures of sound, image and avant-garde music and sound builders alva note (DE) & Ryuichi Sakamoto (JP). The collaboration between the two artist and the language they have created with the interaction between the sound of the piano, the electronic sounds and the interactive images make this show a unique experience and it is a great representation of the spirit of the Advanced Music and Multimedia Art Festival that it is SONAR.