In a pretty intimate night ACNE introduced the new Autumn-Winter 2010 Men and Women´s collections. To keep things simple as much as possible lead you generally to succeed, and success is precisely something that Jonny Johansson, founder and Creative Director of ACNE, knows rather well. So in an easy way and with a laid-back feeling, press were gathered at Enskilda Galleriet just like if it was about a reunion of friends in the living room of his house. After a warm welcoming speech Johansson was explaining the collection look by look. Different media worldwide were invited to this private presentation which actually came along with a new furniture design series. 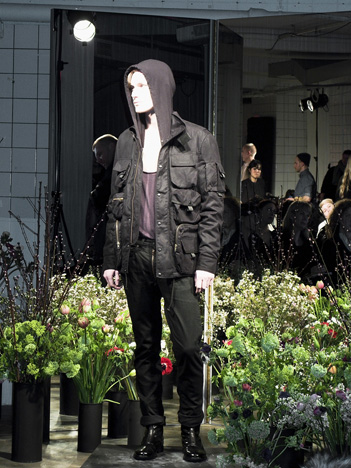 The event was scheduled into the Stockholm Fashion Week by Berns. ACNE is one of the leading international brands originally from Stockholm. Acne Studio is the name of each store and have opened so far in Stockholm, Gothenburg, Copenhagen, Oslo, Hamburg, Vienna, Paris, New York, Bergen, Stavanger, Sydney and Amsterdam. 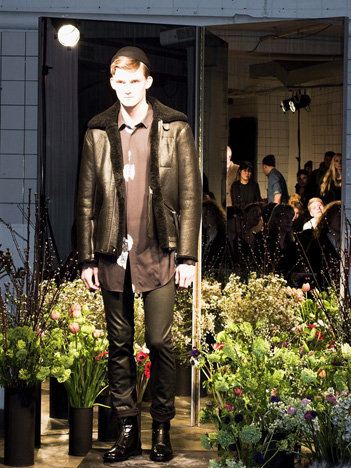 The Men´s collection is developed from one garment – the sterling flight jacket. It has an aviator vibe but without the usual heavy look and combined by more soft elements. “For me when it comes to the men’s style – I always find combining feminine elements with strong masculinity super interesting. This contrast is something that I always play with but this season it is perhaps even more exaggerated – juxtaposing the floaty, fluid blouse with the strength of the super masculine aviator jacket” – says Johansson. 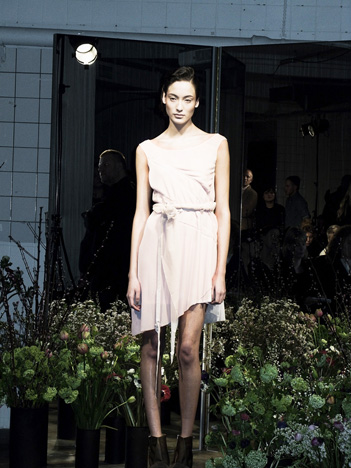 The aviator red line continues to the Women´s collection, inspired by the first girl aviator Amelia Earhart in 1920´s. A gentle way between adventure and desire. Johansson clarifies – “For me, when I start to design I always want to portray a strong, independent, confident woman – these women scare me and that’s what inspires me”. 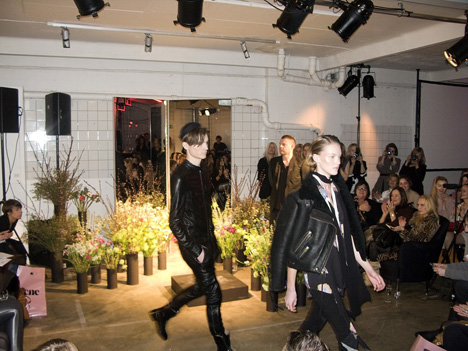 Guests were having good time, meanwhile listening to jazz-orientated music by Mimi Xu in the background and having a zip of Pol Roger between Johansson´s explanations sometimes followed by an improvised approach to the model for some re-touch or just to grab some specific part to go further in the explanation regarding qualities or some garment detail in particular. Those moments actually seemed to be the favorites to all the photographers due to the sound of the several clicks were shot in a row. Although Johansson himself afterwards confessed to me about he felt a bit nervous actually he managed it spreading admiration and kind of a closer feeling to everyone. 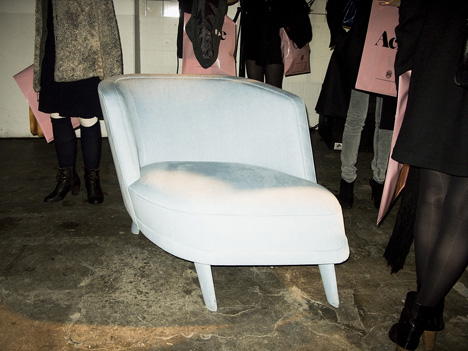 Once the autumn-winter collection was shown, conductor Johansson moved the crowds to the next room in the gallery to introduce The new Berlin sofa, a very retro collection with a modern twist. Actually Johansson unveiled that part of the inspiration comes from Grandma´s home by pieces of Carl Malmsten (1888–1972) a Swedish furniture designer from The NK group “Furniture has always been my world and it is my history as a designer, where I began creatively. Sometimes I am asked what is Swedish design, and I always think of the Creative Collective – The NK Group – an incredibly influential collective of furniture designers, based in Stockholm during the 1920’s to the 1940’s. The NK Group is what Swedish design encapsulates for me – functionality, creativity, object and craftsmanship”. 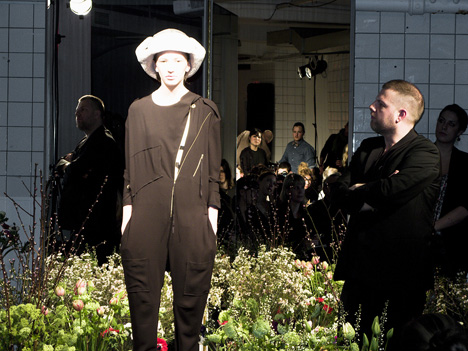 The denim 2010 was represented by a piece filmed by photographer Andreas Larsson –“ why should fashion not be film?” clarifies Johansson. Well, ACNE is part of the magnificent creative collective which includes advertising department, animation, film production and their own magazine Acne Paper.

We all got good time preceded by the celebration that besides the invited media different figures from the Swedish culture panorama and other designers team-related people with the different shows during the Fashion Week joined the party.