Up until about a year ago, it seemed there was no end in sight to the real estate boom devouring New York City neighborhoods. Brooklyn in particular was hit hard by developers rushing to cash in on a market they assumed would continue to go up and up. “Luxury condominiums” were built without regard to scale or style of surrounding neighborhoods, erected in the hope that buyers would be unable to resist the temptation of “lifestyle living” at million dollar price tags. With the collapse of the real estate market, the rug was pulled out from underneath the developer fantasy world, leaving stalled, incomplete and abandoned construction projects in their wake. Empty storefronts, construction lots and scaffolding litter the landscape, creating a new urban blight that inflicts additional punishment on neighborhoods already struggling with NYC’s vicious cycle of gentrification. 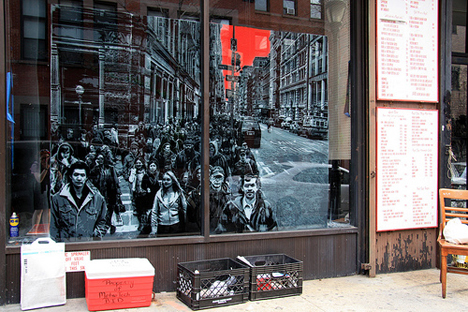 Willoughby Street in downtown Brooklyn was one such blighted block – businesses were vacated over a year ago, ostensibly in preparation for demolition to make room for new development. The storefronts remained shuttered, dark and empty… until the beginning of July. In cooperation with the MetroTech Business Improvement District, the Ad Hoc Art gallery curated an exceptional storefront installation show. Garrison and Alison Buxton of Ad Hoc marshaled some of New York City’s biggest names in urban art to donate their time and considerable talent to decorating storefront windows. Featuring the oversized stencils of Logan Hicks and Chris Stain, the formidable printmaking skills of Cannonball Press and Dennis McNett, chalk installation photography by Ellis G., the colorful, graffiti character stylings of Cycle, and a life-sized fiberglass mold sculpture by John Ahearn, each of the 12 storefronts displays each artist’s unique style. 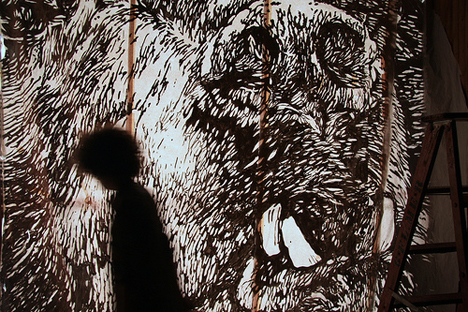 The fundamental idea of the Willoughby Window project was to inject some much-needed life and positive energy into an otherwise neglected city block. The developer could have lent the space for advertising, especially given that whole store “wraps” are increasingly popular as a means to make use of vacant storefronts. Aggressive outdoor advertising companies such as InWindow claim to be beautifying neighborhoods, but are in reality only further contributing to the endemic, visual pollution of public space. After a decade of global capitalism in which it was unheard of to get something for nothing, it is both radical and refreshing to see space literally being given over to art, albeit temporarily. The art storefronts are visible and open to the public 24/7, with plans to remain in place roughly one year, or until further development. In several months’ time, the windows will be refreshed with a second round of installations by a new cadre of artists. 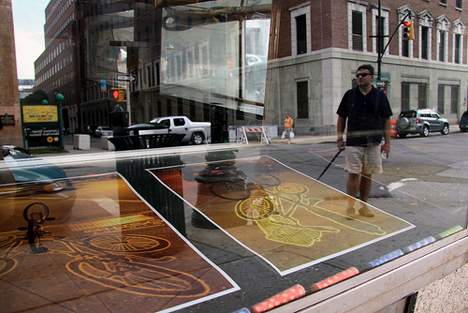 Hopefully, this project will serve as inspiration for other neighborhoods and cities to reevaluate unused storefront space. With a little initiative there are opportunities ripe for the taking. Curator The Mighty Tanaka recently hosted a well-visited art show in a temporary, pop-up gallery – what better use for a newly vacated retail space between tenants on Manhattan’s busy 14th Street? Ideally this type of urban revitalization project could be replicated on a larger scale – with funding, it could be extended to help get people back to work, create art of real value to the community and make a meaningful contribution to true quality of life improvement. Something good can come out of an economic downturn, but only if communities join together and come up with creative solutions.